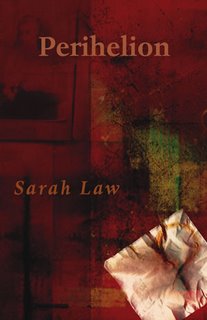 I was happy to see that Law's earlier yoga poems receive a sort of sequel here, "Tai Chi Sketches", and it's good that Sarah Law has been expanding her range of exercises because this form is a strong line of work. Elastic meditations of the embodied mind. As reported in Bill Moyers' book Healing and the Mind, Ma Yueh Liang describes the principles of successful tai chi:

"First: Calm down. Think of tai chi only.
Second: Eliminate any exertion.
Third: Be consistent in movement and speed.
Fourth: Practice truly and precisely. Study the movements you make.
Fifth: Persevere. Practice for the same amount of time at the same hour each day."

A rigorous regime which would hold good in many enterprises, studying the movements seems like the essential prescription here for writing, and Law's rhetorical set of steps sets out a compacted, jarred form which blooms as you read, sponge-style, (As Law mor elegantly puts it, "Take my form into your fractured strands, and / bloom like coral"), and with these sketches this is what happens. Here's

I flex on your neck, High Stepper.
You streak the length of a flank, a taut
bow of the stars in their fire formation,
pulsing. Two snorts in the wardrobe,
luck in the heart, gas in the lock
of your bone-long jaw. I think
you must have been hit by a master,
someone in leather, their fingers in leather,
stabbing at sugar and velvet. As a child,
I fed a horse, pushing my vulnerability up to my arm,
for a mouthful of grass. You protected me then,
exhalation of dew on a plant, the gloss
of green leaf, a fairy story. Now
I’m scooping the waves of your grace apart.

Sarah Law's poetry is laden, the syntax stretched. The possibility of overload is always present, which pushes Law towards fluent & controlled metrical patterns. One of the ways in which Law lays on the riches is in her tendency to allegorize abstractions with strange & specific details until the abstraction runs:

This wayward drift is appealing, though it can turn prolix:

Plump with the reality of wonder
that ineradicable line of Greek
questioning her maker, filling out
the ponderous auricle of blessed
interregnum, smoothed design,
the clamour of impressed footmen
contrasting with brutality’s dispassion
the road ahead, when a rage
of feathers heralded the seat.
("Madonna in Maestà")

Previously, as mentioned, I enjoyed Law's "Stretch: yoga poems" (in The Lady Chapel) but found her ventriloquism of medieval mystics there to be less enchanting. Perihelion contains three new sequences plus assorted other poems. The first sequence is "A Clutch of Monsters" (twenty fourteen-line poems), each one centred on a lyric "I" which speaks from a body (not always apparently human) possessed and possessing. Artifice and emotion, "love griddled on a disc", this is fascinating work & I haven’t read anything quite like it. Here is "Spare Part":

I have a precious metal lover. He's a child of ice,
wearing brands about his stubborn body. I
hoover up the splinters from his tomb, use them
to cut a new name on my arm. Into your vein
the snowflakes flow. You stretch and lumber along.
It's later, I'm watching the box and my dress slips down,
and everything puckers. Don't replace the part,
whistle for rats, or aggravate a war: I siphon
blue fluid and watch your small heart float; Mr
electric circuit, you're a jerk. Fist on the console,
sympathy's an allergen, an unscrewed iris, your
attitude's enough to block a lift shaft. Let's
do it in the tunnel with that time bomb on your back.
Credits crackle, rolling on in silence.

What made me go back and re-read was this detail, "an unscrewed iris". As with many of the poems, this poem feels like a longer, more conventional work, collapsed in on itself to produce this short, fractured piece. It's a poetry of affect where the affect flashes out unpredictably in faulty beams. The end credits line to "Spare Part" underscores a sense I got of this "Clutch of Monsters" as filmic, as lyric poetry projected, after Blade Runner, a film which has its own tableaux of dolls, robots, uncertainty over the artifice of bodies and correspondingly hyper-bright dialogue lines.

The title poem is not part of a sequence but is paired: "Perihelion" (The point in the path of a planet, comet, etc that is nearest to the sun) and "Aphelion" (the point where it is furthest from the sun). Here the danger of poem-as-imagined-monologue in lyric "I" mode (a danger which never occurs in the "Clutch of Monsters") appears:

Almost destroyed. But soaring.
I'm edging on my orbit to the raw
flare; singeing for the sake of it
my sky-tight lines.
("Perihelion")

Perhaps I should be thinking about fire-walking, religious healing, or orbit-pilgrimage: "Won’t you take / my body? Won’t you shoot me through the heart / with big red flames? How flammable I am." The correlation with planets gives a cosmic & inhuman scale to such concerns which can only bump down as bathos.

Elsewhere, a headache is described

My brow is blooming in rows of sweet
pea pod synapses. Tiny green tendrils
pulsing in the glimmer of the light.
("Headache")

where I wish the poet had left it with the sweet & painful first sentence, rather than extended it towards "glimmer of the light", and this kind of over-extension which, to this reader, too often became a diminishment, is my central complaint with the poetry.

The longest sequence is "The Baptism of the Neophytes", each poem receiving the title of a painting, fresco, or a generic scene or arrangement in Christian art, nearly all Italian and from the Renaissance it seems. Particular art-works or themes seem to be, as with the yoga positions, still points to think on. Many of the pieces are sealed at the end with a rhyming couplet, like a cut, making them jewel-like with a slightly suffocating brilliance. I wonder if Law suffers from her success in finding a fluent fracturing form so one poem becomes forty similar ones, a dilution I felt, rather than an accumulation.

I think that Law – in this sequence – seeks the revelatory image & must work through her various writing strategies to get there, often at the end of each piece:

There is an arrhythmia to longing;
systole and diastole, low leaps
up to a clean fluidity of hope
spoiling the immunity of ice,
arrowing over these grey clouds.
("Soul to Angel")

The title poem, named after a fresco, last in the sequence, seems to address painting itself, and also leaves us at some kind of threshold, as "neophytes" to the spiritual world. It also shows Law's strengths and weaknesses as a writer:

THE BAPTISM OF THE NEOPHYTES

The expression of your testament
flows skin to sublimate. Come here,
process until the plateau floods, and
time repaints that moment to the wall,
your mouth bruised with faith.
Life's torrential, a brush of flesh,
your collage of submission. You
can only push at love so much,
- spending rain in reparation –
thought that hurts confessed in free dimensions,
lifted through speech to the eye's
pigment, a touslement of fruit,
soft-eyed in tension's handling.
I'll read again our slow transections,
the critical refluxes of despair
harbouring innocence, a glance of light
wreathing narrativity
like velvet in the raw, you're
surviving the ache of smoke,
the fire that clouds us up.

To take two examples, "the ache of smoke" I find blurred, as ecstatic revelation or spiritual nostalghia, but "the fire that clouds us up" is lovely. But if you haven't read any Sarah Law, this book should confirm that her work is distinctive and many-faceted enough to be worth seeking out, to "process until the plateau floods".