The Flâneur Beside Us: Robinson & Hai bin Yaqzan 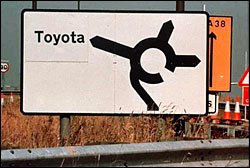 Wherever he is, he’s in the middle, Robinson the flâneur, the seeker of convivial life who lives plainly “rather as people were said to have done in the former Soviet Union”. Robinson the unseen psychogeographer & walker of Patrick Keiller’s two films London and Robinson In Space. The laconic narrator says, “Robinson had reached a critical point in his investigations into what he called ‘the problem of London’ and bid me come at once before it was too late.”

“Robinson predicted that the writing of poetry would now flourish all along the Brent valley, but when we stopped at the café of a popular Swedish furniture store, we could find no evidence of literary composition, only the air of strongly felt disagreements which so often accompany questions of interior design.”

Robinson is out of time; he dedicates Leicester Sq. to Laurence Sterne, reads the Post Office Tower as a monument to Rimbaud and Verlaine, and considers the number 42 to be “a sacred bus route”. He searches for the 18th century, as Walter Benjamin did, and he searches for the multitude, for Edgar Allan Poe, the “man of the crowd”, but what he finds is the house where Defoe wrote Robinson Crusoe. “Robinson was very depressed by this, and spent several weeks in his room staying up very late to read.” The flâneur had gone in search of a world outside of himself, but was faced with the Protestant vision of isolation.

Weldon Kees’ Robinson poems seem out of their time: closed in, full of private agony, antithetical to any wider political spirit or communal engagement:

The dog stops barking after Robinson has gone.
His act is over. The world is a gray world,
Not without violence, and he kicks under the grand piano,
The nightmare chase well under way.

The mirror from Mexico, stuck to the wall,
Reflects nothing at all. The glass is black.
Robinson alone provides the image Robinsonian.

Created in his own image, but his own image has disappeared. His position is disturbing. It can be traced, with an ethnographic eye, into T. S. Eliot’s Prufrock & also “Who is the third man who walks always beside you?”, to Larkin’s “Mr Bleaney” and his interminable room, to R.F. Langley’s Jack, “Jack’s the man, he is your man in things,” flâneur of the hedgerow. The extra person who, being excluded, is included, always with us, whether spiritually or not, always about to disintegrate. Defoe’s Robinson can be traced back again to a wider romance tradition, specifically to the 12th century philosopher & scientist Ibn Tufayl's Journey of the Soul, first translated into English in 1708, eleven years before Crusoe - the book is about a man (Hai Bin Yaqzan) who is either shipwrecked, born from a tree, or spontaneously generated on Waq Waq, a legendary island often mentioned in Arabic & Persian literature, where he examines the world, his body, meets another person, has to kill an animal, and contemplates Allah. If Selkirk provided the inspiration, clearly Tufayl provided the form – one which has nothing directly to do with later noble savages.

The third Crusoe work, comprehensively titled "Serious reflections during the Life and Surprising adventures of Robinson Crusoe, with his Vision of the Angelic World" gets closest to the "journeying soul" of Ibn Tufayl whose character Hai bin Yaqzan translates as Alive, son of Awake. The philosophical romance flourished for hundreds of years in Islamic literatures - and in great diversity - My knowledge is too scatty to surmise which sources Ibn Tufayl (full name Abu Bakr bin Abd al-Malik bin Muhammad bin Muhammad bin Tufayl al-Qaisi, known in the medieval West as Abubacer, born in Granada in 1100, died in Marrakesh 1185) drew from, though the immediate context is that the work argues against al-Ghazali's Destruction of the Philosophers through a striking variation on a story by Ibn Sina (Avicenna) which tells of a Princess's son cast onto an equatorial island.

Ibn Tufayl's work was one of a number of these philosophical romances & "assemblies" taken up in post-Napoleon Egypt as models for the development of an "Arabic novel". Interestingly, Robinson Crusoe was one of the first Western novels to be translated into Arabic, c.1800, a good fifty years before the movement to translate Western novels took off. More recently, Ibn Tufayl and his Hai bin Yaqzan has had a marked influence on a number of Arab women novelists - (generalisations: sensing a character outside, who must always begin again?, spontaneously generated & so un-sexed?) - I'd recommend Lebanese novelist Hoda Barakat's The Stone of Laughter (Hajar al-Dahk) - (it has an excellent translation by Sophie Bennett from Garnet Publishing) - which is a novel about an androgynous young man Khalil living in Beirut at war, attracted to an asocial Robinson-mode, as the city is reduced to remote islands of life cut off from each other.

Eliot’s reference to “the third who walks always beside you” (Wasteland V) is characteristically an almost-endless set of mirrors – it must be at least the road to Emmaus, an observation from Shackleton’s expedition, and the idea of the Wandering Jew derived probably from JG Frazer, and doubtless much else. Before the breaking of the bread, Christ is visible/invisible – and the quote from Luke is recited in Tarkovsky’s Stalker while we pan over sleeping Professor and Writer, who wake up. But it’s ambiguous, because this could be Stalker’s dream – he remains asleep – and Stalker’s own vision of himself as Christ-like. And so it relates to Robinson’s Protestant aloneness – with a belief in the invisible, which is visible as so much agonizing space. Which is precisely the paradox reconfigured, because, for Benjamin, the flâneur operates in a Messianic time, walking in the crash of now which is history, the city & their arcades; Robinson, alone with a God who’s evaporated, is left to wander, bereft, the castaway desperately, comically, trying to regain the cast.

[Thanks to Stephen Vincent, Roger Day & Rebecca Seiferle for prompting & arguing out these few reflections over at the Poetryetc list]

I once interviewed Patrick Keiller about Robinson and other matters.

Quotations from the Robinson films are remembered & not accurate