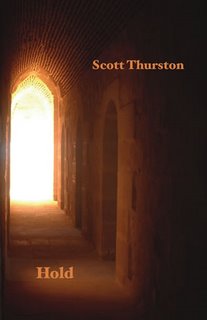 Thurston's poetry is, I think, concerned with a point of contact across terminals, between one and the Other:

This, the first poem of the first sequence, is also a spectral statement of poetics. I get the impression that Thurston's poems are short statements remaining in an emergent state, thus leaving it to the reader to always, newly for each poem, engage in a building-up (Aufbau) principle. So my encounter with the poem is a becoming-approximation.

Becoming-approximation is quite exhausting. Perhaps that's why the poems I went back to re-read several times were the shorter ones:

For Thurston's first book-length collection, the long time-span of creation (1994-2004) serves the book well. In addition to the exhausting poems there are also wry observation-poems, prose pieces, and one long phase-shift poem, the giddy "Speak for Itself" which takes its title and evacuates it / elaborates on it for seven pages:

Self-speaking as (anti)democratic, desirable or even possible; further aspects of the question are added (terrorism as a means of speaking-for deconstructed, "clueless terrorism commands public spectacle / attention disruption memory perception / this terrorism speaks for itself / this situationism speaks for itself") until a high pitch is reached about two thirds of the way through:

I can imagine this being pretty dizzying in performance; it's quite head-turning just reading it. The sound of these poems does seem important, as assonance and quite a few single internal rhymes keep hooking poem-parts together.

Towards the end of the book are a few prose poems of various kinds: sequences of postcard-sized blocks, and longer ones which seem almost epistolary in form. In "28 December", Thurston remarks: "I am writing this in order to try to deliver myself of myself: to escape the trap of my limitations by offering them to others to supersede. The poured-out volume always leaves a trace; sliding quietly off somewhere, staining the tray it rests on." Offering such a generous statement from one of Thurston's first persons it seems churlish not to take it up, this delimitation by exposure. Actually, it's another way back to the poetry of speaking which wants to leave a trace on paper as a negotiable echo.

As for wry observation, these seemed like the weakest poems, a rather different Thurston, here making heavy going of an imperfect water bottle –

It provokes me. The flashing cuts into
the softer tread of the plastic stopper:
scoring lines. I fear this marred
perfection. I determine to return it, but

break a patterned habit against the
stress. If I can accept this flaw
I buy in myself a bigger store: a
stock of held resistance.

– though this angle is put to better effect staring at the floor in a sports hall where examinations are taking place:

for the degrading of the human.

The prose pieces present a crazed surface folded back on itself. They are a kind of chamber-prose. The results are unpredictable. With the force of concentration now on sentences, we can see the reference points switching more clearly, a method which paradoxically produces a greater degree of obliquity, as here where we move from marriage to half of a Moloko refrain:

"Marriage is a convenience where aspiration released invites trails of utility. Repairing the freezer compartment with a double tube in a flat short hall hold. Historically we don't make cross boxes for anyone else accidentally. So it's important I'm reading you by a little house viewing in then out the window as a wave becomes a finger just before the cleaner arrives. I turn the wave at my expense. The hero gives you something: a cast of hands sing it back sing it back sing it back to me."