A Stack of Mei-Mei Berssenbrugge Horizons 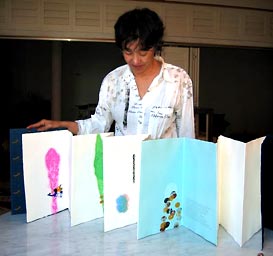 "Intercapillary Space" takes its name from Mei-Mei Berssenbrugge's Endocrinology, so here is a celebratory list of illustrated links for this excellent poet:

A page from the forthcoming Concordance at the Kelsey St.

"What if that image were Eros as words?"

"Between its alleged color and its alleged visibility is a lining, like the double of a mouse, latency, flesh."

from The Retired Architect

"I tried to complete a life circumstance like a building, loose in space on
used land.

I made a shape against sky on flat land like a cut in the weeds, but I got
bored and didn't finish.

Concrete surfaces need support, and my illness made calculations difficult,
shadows fell like hinges on erasures.

The iconography doesn't ethically correspond to its cut up and eroded
state.

I make something which as it changes and falls apart, offers no clues to
itself before, as if all shots were mobility frames.

Small daisies grow in the cut, preserving the shape.

Physical significance becomes an area lacking objects, a changing surface
as limit, like the surface and mass of a lake.

Nothing was completed, but there are a lot of sketches."

New Form, a short talk given at the Poetry Project, St Mark's -

"That particular conjunction of events which includes the history of your body, your experience, and your art vertically, and the time and circumstances you are in horizontally, seeks an expression, that is inevitably unique, or new.

A formal problem or limit represents a limit of what you can make or say or see, at a particular moment. You might make a new form by following a desire or an intuition into a further, more contemporary part of you, such as varying the line length according to the horizon, embedding scientific terms into an equivocal or into a lyric context, using thought imagistically.

I find the idea of newness interesting, during a time when there is no recognized critical aesthetic. The criticism is at the edge of what it can discern or say, and so it's interesting to seek emerging form in fashion, in the margins of the arts, on the street, in experimental physics."

"Here "around her" may be within her, or perhaps the suggestion is that all outside space is "intercapillary," between the bodies' organs, and relates to them--what an extraordinary definition of space as social!"

"Instead she's using a variety of connections and contexts that themselves attach to different points on each sentence, and the spaces between the sentences make all this evident, visible. Like an appliance that can connect with different cords to different outlets."

Kate’s Talk – text of a talk presented at the Poetry Project, St Mark’s,

"If the world is flames, and you are flames too, then you don't see the flames.

A person comes to you, while you are thinking. She is there with you in your thought, and she is also struggling to leave her body,

like a patch of the sound of bus wheels next to a branch that is moving back and forth outside your window.

You can't help seeing sections of wall behind it, as if your memory or your sense of meaning about the person were an embodiment of the person,

so that the end result is that you see through the branch the expanse of wall behind the branch,

when the spray of yellow leaves moves."

from A Context of a Wave

So that the place would sit in me, its wide space with sun, as what it would be in my memory of this time. And how it would be perceived is a matrix of how you were with some people around you, not agents but catalyst or fuel for the perception of light on a wide space, so free as to be impersonal in the company, implacable and impersonal."

"The way in which she shares her happiness, as a matter of course, gives me a sense of guilt, because I do not feel the happiness.

All the animals in the story, who eventually die, consist of tiny lines scratched into reddish dark ground.

The white of an eye is scratched away."

Three conversations with Mei-Mei Berssenbrugge at Jacket - with lots of photos of her book-collaborations with Kiki Smith and with Richard Tuttle.

"MB: New Mexico has been important to my work for a long time, since my early 20’s. It helped me to think about the horizontal plane of meaning, because its landscape is so large. Also, it correlated with my interest in phenomena around me, because the light is always changing and you never get used to it. It’s beautiful and spiritual."

Blurring the borders between formal and social aesthetics: an interview with Mei-mei Berssenbrugge by Zhou Xiaojing

"John Ashbery is a great influence on me because of the fabulous richness of his metaphoric and linguistic abilities. Specifically, I thought he could make a kind of simultaneity in his work that interested me. At the end of a poem, it can all rise up to be one time. You can see it as a simultaneous time. For me that opens up all kinds of possibilities of navigating your way in the world, and also the kinds of things you might include in a poem. I like Ezra Pound's language and straightforwardness, and also the complexity of structure in his Cantos."

'Competent communal living entails inattention to things no doubt worthy of scrutiny: physically and psychically felt vacancies, emotionally textured spaces we wheel through daily. The registers and relations within those intricate shadings can daunt, as Henri Michaux says: "You cannot even conceive the horrible inside-outside that real space is."'

Two readings and a conversation with Charles Bernstein online at PENNsound.

Second photo of Mei-Mei Berssenbrugge is by Ann Hutchins