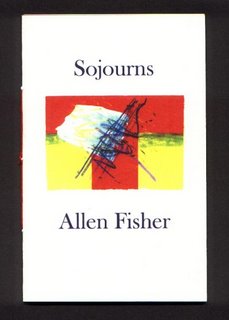 [#] THE CROWD: momentum, energy and the work of Cy Twombly (pdf)

Swim at the Electronic Poetry Review

"A topology of catastrophe
Disaggregates edges asks where and when
of the self floats on intolerable significance."

"Quantum-mechanical interference patterns provided evidence of a coherent quantum superposition between a pair of atoms and the molecular state. an ideal coherence that invoked a return to modernism and its theological restraint."

"It is known as the hedgehog space of spineiness misquoted as spinniness. Parts of the space are unapproachable just as others are unavoidable. A classic text at Palenque speaks of the central axis of the cosmos as the 'rained-up' sky. All opens to the separation of the sky from the Earth."

Sojourns page at Wild Honey Press. You can click to read the book, then buy a hand-sewncopy with card cover, the painting on which is one of a series of Trap studies by AF.

"The ancients used cinnabar, the red sulphide of mercury, for bright red. Zosimus spoke of it coming from the stars. Vermilion is the re-synthesis of mercury and sulphur into the likeness of the cinnabar from which the mercury was extracted. After vapourising and recondensing into the top of a flask, the flask is broken. It's almost black. As it is ground it becomes red. Cennion reckons that if you ground it every day for twenty years the colour would still become finer and more handsome. The change from black to red isn't a chemical one, but structural. A matter of light response to internal shapes. For this reason, vermillion isn't liked for painting on exposed walls. Modern manufactured vermillion is more prone to this structural change than its mediaeval equivalent." 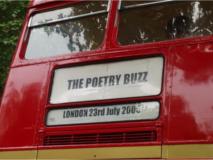 The Poetry Buzz, a wonderful account of a day long celebration of Allen Fisher, with photographs.

"When university professors with big bibliographies hit sixty, they're frequently honoured with a festschrift, a solemn tome of panegyrics from admirers and learned friends.

Professor Allen Fisher has recently turned sixty. He gets a ride on a big red bus.

'We're celebrating three decades of Allen's work,' says his partner Paige Mitchell, 'but it's also a kind of Salon de Refuses on wheels'"

from Gravity as a consequence of shape: TENSOR at the Alterran Poetry Assemblage

"Too late to join the Investor Relation Conference"

"part 1:
Allen had set up six easels with their backs to the audience. He then drew with felt pens while not looking at the drawing but instead gazing at (small fragments of?) the audience and the room as seen from where he stood.

He did this twice or thrice on each easel - to the sound of the felt pens rubbing and squeaking on the paper - while the audience looked and listened in total silence - and fascination.

part 2:
He then read from the text of a new poem Vole Volespin - inspired it seemed by the trapping of small animals like voles and mice and by the traps they are caught in"

William Burroughs: Some Contexts for Visual-Text Production by Allen Fisher
draft beginning of AF's Assemblage & Empathy: Composition in American Literature
and Art after 1950 online at Argotist

"In one spacetime the physiological process with mechanical device from that process. This a combination also proposed by Paul Metcalf with a radically different sensibility, both in terms of its perception's choices and the methods of selection. Both artists take on the disaster of Hubbard's physiological theory of memory and 'Clear Mind' fascism, in coupling with a particular American development of assemblage." 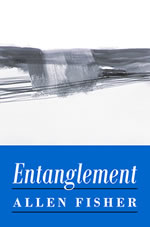 3 Sample poems from Entanglement online at The Gig.

"Having come so far to find peace
you hate its stillness
and imagine shouting."
- from Jig Walk

plus further bonus 22 poems available from the Entanglement contents page at The Gig.

From the CCCP archives:

"The sponge is not infinite
but its limits are immeasurable" 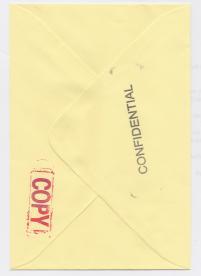 "Venus rising from the sea is a hieroglyph of the republic"

"as if in a new notebook, started anew, at peace in the pace of a recall" 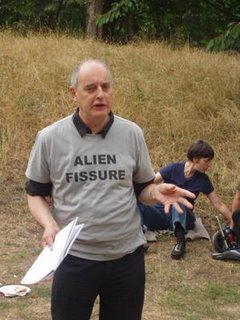 "The trapping region fills
with isotropically pure helium
in a cupronickel tube. A cold
beam passes through a series of
teflon windows, collimated
by a boron carbide ring, and
into the trapping region gets absorbed
by a beam stop. The trapping field
created by an assembly
of superconducting magnets continue to be
confined by quadruple racetrack constructions."

"Her garment was so bright and wondrous sheene
That my fraile wit cannot devize to what
It to compare, nor finde like stuffe to that,
From her unhastie beast she did alight,
And on the grasses her daintie limbes did lay
In secret shadow, farre from all mens sight:"

OLBOLO online at The Argotist. A poem in green & red. 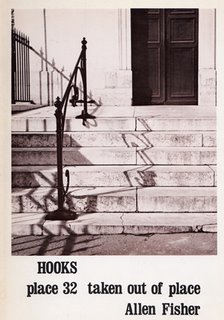 listen online to Fisher reading Excerpts from Watusi (9:47) and Wattle (4:54)

There is a part of 'Bel Air' at the Stem Recordings page,

"A reader follows the marks up the path
occasionally losing balance from
may be
synaesthesia stopped short by the figure
of Blake, kicking away sand and pebbles,
joining the path
naked beneath his raincoat,
locks my eyes."

AF's Spanner Press, 'about two publications a year'. Listing of titles, prices, & how to order them.

and a Spanner/Spanner Editions page with subscription information & lists of samizdat magazine contents.

The index to Allen Fisher's website, where you can see the weekly drawn image (collect the set)

Overview of Fisher's work in clusters, at the BEPC

Jive In The Blood - Sarah Law reviews Gravity at Stride
"Gravity, obviously, challenges what we think is the 'right way up' of things."

"the aesthetic impulse throughout Place always is toward here, this point in the text, the immanence of the word, so that it strikes me as almost impossible, or at least pointless, to quote passages or suggest an overarching course behind the text."

"a fractal is an irregular action or shape, such as a cloud or a coastline, which is complex, though not now impossible to measure mathematically, and to establish the laws which govern its shaping."

Pierre Joris on this set of links, with two parapgraphs on Fisher from his own A Nomad Poetics:

"We will take the whole of the new century to finally read Allen Fisher's vast investigation into all our knowledges, the great serial constructive dérive he calls Gravity as a consequence of shape."

Bibliography of articles on Fisher at BEPC

A collage of responses to AF's work online at The Gig

Gilbert Adair's comments quoted at length are very interesting: "Say that the serious question there is: What would a non-symmetrical form be like? If it's four-dimensional, it has to move. A form where nothing is lost or dispersed – that is the circle's promise, the arch-symmetry of extreme tensions without discharge. The conservation of mass and energy. The universe may not be a pulse, ever-expanding would need the "spontaneous symmetry-breaking" referred to in Allen's essay "The Topological Shovel" (1982), effected "in the ultra violet or unseen region as if there are no masses".

Links compiled by Edmund Hardy. If you spot any new or missing Fisher links, or any broken links here, please get in touch. Also if you spot any mistakes.