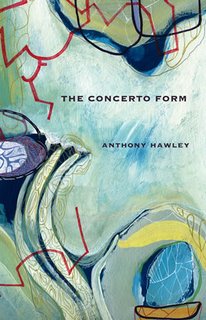 The lyric self, larval, self-snail: "To dwell means to leave traces" – Walter Benjamin, quoted here. The trace and its contents will disappear, "Io parlo in questa / lingua che passerà" – Andrea Zanzotto, another quote. This is Hawley's debut book-length collection, four sequences. The title sequence is prefaced: "The cactus needle of the past that could be broken by a mere earmuff, plays the phonograph record of its record never again. This is called the concerto form." – Jack Spicer, 'Homage to Creeley'. The four sequences are: I. Vocative, II. Awhile, III. Afield, and IV. The Concerto Form. The series within the book then seems to be: speech, time, space, music.

'Afield' consists of poem fields where the disjointed sentence seems to arch over the top of words clustered by stressed similarites, the lurching of insistent stresses reading rather as a shaky camera movement through terrain. There's much alliteration, a few internal rhymes, always this jagged obstruction:

Slugs move in the wet, pick up particles, must trace themselves on land. Hawley's sonic fields present these tracings, stubbly and thwarted.

'Vocative' includes quite a few command-statements, as at the beginning of 'L'alfiere del vento':

Start with a negative,
an emptied castle.

In your eyes is a village
It is filled

with no inhabitants.
Grapes grow white.

Throughout a grove
they express clarity

greater than zero itself.
Watch the way

The writer of the poems is clearly a writer-self, appealingly described as living out a snow-globe existence swirling in the writer's own poems which find an equivalence to the outside weather:

resist writing
about snow its
fall brings as
many poems on

Hawley continually seems to have uncompressed what once-was a close sound-world and "I = I" address, then let it disperse out so the poems read as outcrops & clusters of dense material found scattered not in an open field so much as one of relations where language is atomised and each part has its own transitions, passages, "tendencies" - externality itself.

'Awhile' allows a new whimsicality to be spotted, and first person to appear, though the atmosphere is still geological, "Language lets / loose a ledge". A new form, one of long lines, is introduced, the dream of 'Subterranean City' providing an inverse where the hallucinated outer field can now speed up its transformations. The segments of 'New England Pictures: Outline for an Opera with No Persons', where everything seems appropriately picture-flattened, seem a little laboured

playing with a reduction down to one, "Houses have a way of thinking", "Persons have a way of not knowing", which then disappears. In the absence of people – gone, waited for – there's an extra space, a supplement, and signs of territory proliferate in a slow fade.

'The Concerto Form' presents a series of long-lined letters interrupted by shorter pieces. The letters are to B. The second of them is called 'The Rebecca Letters'. The point is that they are addressed, I write to you. They read like the kind of letters a Robbe-Grillet character-cipher might be continually writing, continually looking out of the window. "Dear B morning's fog folds I delight bands fall unfurl since then I've been in the breeze all day" they begin. There's something in the window, but is it a domesticated goldfish or is it the curtains? "dearest B sky would tell me now it's vespers the calico too sends its wishes but are you upstairs", "no more the calico look out the window I am below", "but now socks have dried the calico's in the window". An amused, whispering voice keeps tracing out, the present's needle tracking round before it can do so never-again, spiralling inwards, playing (or "sounding") what it scratches across until it breaks or a mechanism lifts it up, "money's just about run out".