The Ruinographer dwells in an atmosphere of shards. She once taught a seminar on morsels. It's cold outside so she sits in her room and flips through her extensive collection of vinyl, from Kool Herc to El-P. She considers the space of hip-hop, a quilted space of cuts, mixes, edits & samples, patterned, re-negotiated, a space of stitched echoes. And that's how the Ruinographer came to plan a grand boom-box essay. All it needed now was to find a preface in a poem by Paul Hoover:

The century's
incandescent. In

syllables of
sand, the

(from 'Objects as Ourselves')

Hip-Hop is a music of text and anti-texture, "Steady with the convo, rough like brillo" as C. L. Smooth put it in 'If it aint rough, it aint right' (on Pete Rock and C. L. Smooth's Mecca and the Soul Brother), brillo as an anti-textile, an entanglement, "an aggregate of intrication", cleansing, critically active – 'Let's get to work' as Company Flow would chant – or else Run's formulation: "Cuts for days will maze and amaze" (on Run DMC's 'Beats to the Rhyme'). Hip-hop is amorphous and informal. Synthesized beats could go on forever. Based on a loop, the music gains impetus but no direction, it loops out towards all compass points from & behind the voice of the lyricist.

The hip-hop protagonist is a ruinographer of the greatest speed. 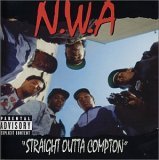 Begin with the angriest line, the cry of pain which multiplies echoes. N.W.A.'s notorious Straight Outta Compton (1989) presents "the strength of street knowledge" made vital by Dr Dre's samplings from p-funk and from earlier funk pioneers, Charles Wright & the Watts 103rd Street Rhythm Band. The sense, repeated throughout hip-hop, of one neighbourhood out-rushing into a wider consciousness, recognised in the title. Straight Outta Compton is an album of becomings, becoming-creator ('Express Yourself'), becoming-addict ('Dopeman'), becoming-criminal ('Gangsta Gangsta'), becoming-revolutionary: 'Fuck Tha Police'.

Right about now NWA court is in full effect.
Judge Dre presiding in the case of NWA versus the police department.

The rhetoric is one of righteous testimony ("Why don't you tell everybody what the fuck you gotta say?"); the lyric sets up a court which is not a court of law but one of justice, the distinction which Eric Hobsbawn draws in his study Bandits which traces the social significance of armed and violent bands of men who challenge the economic and political order by forcibly contradicting those who impose law and control resources. Social banditry makes this challenge simply by existing, and it "makes this potential rejection of inferiority explicit" (Hobsbawm, 8).

Ice Cube will swarm
On any muthafucka in a blue uniform

The choice of "swarm" is one of the only metaphors in a lyric mostly given over to direct threat. What is this rare ornament doing? Jorie Graham would pick up the same trope for her 2001 collection Swarm: "'To swarm' is to leave a hive, a home, a stable sense of one's body, a hierarchy of values, in an attempt, apart, to found new forms that will hold." To swarm is a becoming-revolutionary, to be apart, and from that position, reinhabit the centre by new creation. "Ice Cube will swarm" suggests one body becoming a crowd.

4. The Turntable To Come

With vinyl stacked up to the ceiling, the Ruinographer has only just begun.