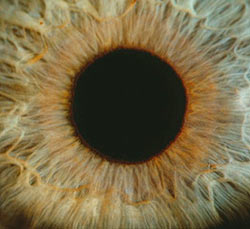 From pigeons' necks to a drop of falling water to an oil patch, a lustrous surface is where names proliferate. Aristotle is first concerned with "simple" colours, black "the proper colour of elements in a process of transmutation" (791a10), in a fire, a slower form of which is living, returning to white, for the earth is "naturally white" – so colour is this unspeakable mixture, juice which is "due to dying" (791a5).

Water is a blue substance; shadows on the sea are liquid on liquid, "the blackness of ruffled water" (791a20) – there is sea surface, and, simultaneous figure, light from a fire; relations between the parts of fire, light which is not always fire-coloured, obliterates the sea until a theory of smoke is signalled: "the blackest smoke is given off by fat and greasy substances like oil and pitch and resinous wood, because these objects burn most completely, and the process of combustion is most continuous in them." (791b22-24) A pure colour is a back-projection; a stone is pulled up from the sea, "covered with lichen" and it turns "black when dried". (792a1-2)

Aristotle's plane of knowledge: We must catalogue mixtures, archive a chromatic diagram which will appear as a constellation of tints in a mass of arrows, "crimson grapes turning violet" on the vine; rust, plumage, hair, fruit & brimstone shall be our tools in this inquiry. "Keeping our eye on actual phenomena." (792b12)

"We must not omit to consider the several conditions which give rise to the manifold tints and infinite variety of colours." (792b32-33) The inquiry gathers speed as the complexity of a flow-chart constellation is revealed, "Lustre is simply continuity and density of light" (793a11). Stones, composites of specific gravity, can contain the diagram of mixtures and reverse it, "and some kinds of stones give rise to different colours, like [The name of a stone has dropped out of the text] which are black but make white marks." (793a20-21) Geological process tinges; lines of tincture through the earth. Applied, the diagrammatic becomes dye: "flowers of plants and their roots, bark, wood, leaves, or fruit, and again, earth, foam, and inks." The porous is a stippling at higher or lower frequencies, so colours are better seen, brown on black, or disappear, tin blent with bronze.

Aristotle considers light to be held, moving through a medium (translucent for chromatic blending), reflected off an "underlying colour" (794a1), thus squirted into the eye as density's yield: when mass decreases in density, it allows "passage" (794a10), and when densified, air and water are "the whitest of things" (794a15). On a white page, the marks of writing would be passages or pores, operating at intervals. Say, mass: "objects under water tend to have the colour of water, reflections in the mirror resemble the mirror's colour" (793b30-31).

Aristotle moves on to skins and pelts and colourings: A hare has been known to be white. Human hair which is black, turns red, then grey, then white. The style is populous archive, sieved for laws. There is a theory of poppies; a bafflement of blossoms: "For part of the same petal may be black and part crimson, or, in other cases, part white and part purplish." (796b21-25) It is the mosaic of percolation's affect, as Aristotle names ripenings by colour, fruit is becoming-"white and black and grey and yellow and blackish and dusky and crimson and wine-coloured and saffron" (795a31-795b1). The diagrammatic constellation of intermixtures, many flowing both ways, "white turns yellow and vice versa" (799a6), is mapped onto things reported and seen: it is an essay of the eye; the treatise blinks.

It is fairly certain that the text On Colours is not by Aristotle, though it is a vital part of the corpus aristotelicum.