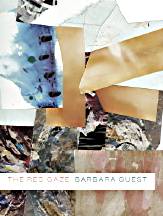 There is often a block of undiluted red in the paintings of Hans Hofmann, a red seemingly in suspension while suspending the other colours present by defining the geometry of the canvas. The longest poem in Barbara Guest's final volume The Red Gaze is 'Hans Hofmann', the painter seen "Talking in an atmosphere of color",

Students preparing for the class and its famous master.

In each of the poem's five stages, the idea of Hofmann, the master, as a "burst of color" is presented in short stacks of sentences, while a "She" is also present at first, "She remembers // a rocky landscape" the poem begins, then later "she begins to absorb her surroundings" is the last we hear about her, she is absorbed, or has become absorbent, part of the "deep red gaze" as it multiplies out:

A cool purple begins to descend through increasing twilight.

The class begins to speak of cold. The class shivers and they laugh.

A pinch of red remains on Hofmann's palette knife.

It reminds him of the red of maple leaves.

The red gaze also recalls Arnold Schönberg's series of paintings from March and May 1910, 'Der Rote Blick', at first two exaggerated red eyes in a face, then a red eye at a side-angle in a wash of brown. These paintings of red-seeing come to seem emblematic for Guest, a writer concerned with the conscious spaces of painting. Another way of thinking about Hofmann's blocks of red is as continuous lines, out towards the viewer, and back through the canvas, unbroken, never local.

They hasten to make use of freed color
who bends to no one,
who dwells in a tent like rhythm
continuously rolled.

The red gaze could also be dawn, freed color with no origin, forever moving across the world, or the glow after the sun's fall, "the after-gaze behind an after-gaze, the final dab of light on a painting" (Fanny Howe on the back cover).

As with Miniatures and Other Poems (2002), the poems read as stripes down the page where much has been stripped out, a process which is not so much paring-down as a drawing closer to the mysterious tensions implied by Guest's statement elsewhere that there is a "pull between the physical reality of place and the metaphysics of space" (in the essay "Poetic Codes"). It is as if this pull has cleared out any smudginess. The suspension of colour becomes felt in stripes:

I saw the stair mount upward and could not stop
its climb until the heavens opened blinking,
until we felt suspension.
An odyssey parades in stripes.

Stripes can be fused, twisted over, and still be infinitely long in that twisting. Many of the poems are double-spaced, giving the effect of blinds, which tilt from smooth surface to lines – as the window-blinds of Vertov's Man With A Movie Camera (1929) do, nested eye-spans – lines which allow an emphasis to fall upon that which was invisible, and is now otherly visible.

Another continuation from Miniatures is the medieval aspect, or discourse:

Piece of tapestry with bird sewed on.
A ruin from Rome, and in the background a rope.

In the banquet hall birds nest.
A stranger causes the water to flow,
the alphabet is full of sorrow.

In the passageway sits the stranger.

He is without sin or sorrow or soldiers who mount their horses
and race up and down the farthingale hills.

(from 'An Afternoon in Jeopardy')

This could be a tapestry, or parts of tapestries fused together. The "farthingale hills" presents a distance, as do the words "Lo" and "maiden" used several times, a distance back to the Aestheticism, to Swinburne's early tones, to the French Symbolists whose audacious mysteries proved so enabling for Guest. Walter Pater, in his preface to the sixth edition of The Renaissance: Studies in art and Poetry (1912), writes, "The aesthetic critic, then, regards all the objects with which he has to do, all works of art, and the fairer forms of nature and human life, as powers or forces producing pleasurable sensations, each of a more or less peculiar or unique kind." That sensual pleasure must work with a plenitude of intelligence, in Guest's art, while "fairer" (Fair Realism, 1989) has joined the idea of vision as being emblematic in Guest criticism: "I would propose that 'fair realism' is Guest's female translation of 'surrealism,' a way of acknowledging the powers of the female-gendered marvelous while holding its less comfortable effects, including the possibility of historical erasure, at bay." (Rachel Blau DuPlessis, "The Gendered Marvelous: Barbara Guest, surrealism, and feminist reception", 2001).

The subtlety with which Guest shuffles these techniques should never be underestimated. Here is a whole poem:


Do not forget the sky has other zones.

Let it rest on the embankment, close the eyes,

Lay it in the little bed made of maplewood.
Wash its sleeve in sky drops.

Let there be no formal potions.
A subject and a predicate made of glass.

You have entered the narrow zone
your portrait etched in glass.

Becoming less and less until the future faces you
like the magpie you hid,
exchanging feathers for other feathers.

In the tower you flew without wings
speaking in other tongues to the imagined room.

The questions amass. Who is commanding, and who is "you"? "A subject and a predicate made of glass", which is memory, "the narrow zone"? Is this childish whimsy, "sky drops", or a desperate distancing? Perhaps, later in the collection, Guest offers a one-line portrait of the writer:

Distance lingers in her hand.

The surprise, or hiccup, at the end of a sentence is a signature style of The Red Gaze, that "imagined" for example, or this: "We have skipped down three flights of stairs, / they are not numbered, they are oddly assorted, velvet." The energies released in the fusing of distances in an "atmosphere of colour" are not, of course, delimited. Guest asks:

Of what use are stanzas in the dark,
ragamuffin?