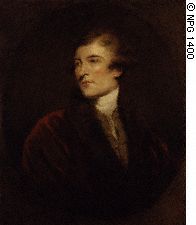 In the eighteenth century a new literary form based on the recycling of lines from newspapers was invented. Caleb Whitefoord (1734-1810), a wine-merchant, poet and diplomat in 1766 published in The Public Advertiser an article entitled A New Method of Reading Newspapers. He gave this method the name 'cross-reading'. Newspapers of the time were arranged in tight columns with narrow margins. Whitefoord seems to have been the first person to notice that reading lines across the page, instead of downwards, produced some interesting results (he may have been anticipated here by an anonymous writer in the Tatler (Vol. 5, no. 49) who read a newspaper in a direct line, 'without regard to distinction of columns'. I have not as yet been able to trace this article.). In a letter of 15th Feb. 1766 (quoted in W. A. S. Hewins ed. The Whitefoord Papers (1898) 143), Whitefoord writes:

Whenever any change on Ministry happen'd, and the Party Writers on both sides began the work of serious abuse, I have always endeavour'd to make such changes a matter of Laughter rather than of serious concern to the people, by turning them into horse Races, Ship News, &c., and these pieces have generally succeeded beyond my most sanguine Expectations.

He used this method again in the New Foundling Hospital for Wit (1770); more cross-readings also occur in various broadsides and ephemeral publications, now hard to trace, usually under his bye-line of 'Papyrius Cursor'.

Writing under this name in 1775 (Fugitive Misc. II. 49-51) he describes his work in a way that seems so modern in its insistence that the consumer of the media is powerless against a flood of contradictory messages from all spheres of an increasingly complicated and contradictory society, it is worth quoting from at length:

If it should be remarked that many of the following cross-readings appear to be political, I hope the good-natured public will not impute it to me, but to the circumstances of the times.—The politics of the times have resembled the weather; the similarity between the political and the natural atmosphere is extremely striking; we have experienced a great deal of foul weather in both. Party writings have long poured upon us, without intermission; every day the torrent gains new strength; all essays to stop it, or to confine it within proper limits, are in vain; the inundation spreads; the news-papers are covered with it; and we are threatened (mercy on us!) with a political deluge!... It was impossible for me, in wading across this flood of politics, not to imbibe the complection of the stream; and if there seems to be any personalities in the following cross-lines (to speak without metaphor) it would be equally unjust to find fault with me, as with the compositor who set in types, and placed the lines of one column exactly opposite to those of another.—This is no business of mine; 'tis the work of the journeyman printer; he is the master of ceremonies in this kind of Contre-dance, who fixes your rank, and chooses your partner; and in doing this, as he is only assisted by blind chance, and couples you together at random, what a motley dance must it produce! being composed of persons whose humours and characters are as opposite as fire and water, oil and vinegar! made up indiscriminately of all ages and sexes, all ranks and professions, high and low, rich and poor, civil and military, church and state, court and city. Such a hodge-podge, or mess-medley, is a London news-paper! a political mixture of heterogenous ingredients, and discordant combinations, where we daily meet with certain intelligence—totally destitute of foundation; authentic advices—politic lies; where we are told that our disputes with Spain are on the point of being settled—and that a war is inevitable; where we are... represented at the same instant as poor and distressed—rich and flourishing; perfectly secure in our liberties and properties—yet groaning under the weight of slavery and oppression; where the self-same person is represented as being both dead and alive; in a deep decline—and in perfect health… Now I will submit to any number of politicians within the bills of mortality, whether the above portrait of a news-paper is a true likeness, or a caricature; and in order to assist their determinations upon this important point, I recommend the following extracts to their most serious considerations.

From this selection I will quote just a few, to give a flavour of Whitefoord's humour:

The comet is now on it's return to the sun—pursuant to a decree of the high court of chancery.
At the meeting at Newcastle, Sir B. F. D. was in the chair—and appeared like a dull, faint nebulous star.
Yesterday there were violent disputes in the common-council—For some time past the volcano has been extremely turbulent.
We learn from Berlin, that his majesty—Was convicted of debasing the current coin.
Now in rehearsal the distrest mother, a tragedy—Occasioned by the undutiful behavior of the Colonies.
Notwithstanding the present exorbitant price of candles—Some dark transactions will soon be brought to light.
Yesterday ended the races at Newmarket—at which several of the great officers of state assisted.
Last night there was a meeting of the female coterie—and five of the most hardened committed to Bridewell.

Whitefoord was involved in a behind-the-scenes manner in the politics of the time. As a neighbour of Benjamin Franklin in London in the 1750s, he was chosen to go to France in 1782 to act as an intermediary in the settlement of the War of Independence. He knew Dr. Johnson and Isaac D’Israeli, the father of Benjamin Disraeli and author of Curiosities of Literature. He was also a poet himself, but he is unlikely to have claimed that these cross-readings were poetry. According to Austin Dobson, in his book De Libris (1908), these publications proved very popular, even among the most distinguished writers of the period. Dr. Johnson found them 'ingenious and diverting'; Horace Walpole wrote to a friend that he had 'laughed over them till he cried'; Oliver Goldsmith is reported to have felt that 'it would have given him more pleasure to be the author of them than all the works he had ever published of his own.'

It is possible that some of these cross-readings were not put together by Whitefoord. An anonymous broadside published in Salisbury in 1782 had this to say (since it has not been reproduced in modern times, the whole broadside is worth quoting in full):

Effects of Cross-reading the News-papers

To news-papers we are principally indebted for our knowledge and amusement.—One particular species of entertainment resulting from them, is, after reading each column by itself DOWNWARDS, to read two columns together ONWARDS: whereby chance will bring about the most unaccountable connections, and frequently couple persons and things the most heterogeneous; things so opposite in their nature and qualities, that no man would ever have thought of joining them together.—The truth of this observation will appear, on perusing the following Humorous Articles, which may tend to promote the practice of reading, and enlarge the circle of innocent amusement.

In the House of Commons, yesterday, Lord N—Received 500 lashes, pursuant to his sentence.

Last night a gang of daring villains was taken up—We hear Lord Sandwich spoke an hour in his defence.

The Masquerade at the Pantheon will be on Friday—No business done at this office after eight at night.

Lady M. Stanhope, daughter to the Earl of H—Has engaged to eat a leg of mutton at one sitting.

Yesterday a man was branded in the hand—none are genuine that have not this mark.

We, the Mayor, Aldermen, & Common Council—Promise never to be guilty of the like offence today.

A most affecting scene of poverty and distress—For the service of the present year.

Yesterday, a poor chimney-sweeper's boy, under seven years of age—Arrived at his house in Whitehall to attend the meeting of Parliament.

At a Certain Lady of Quality's Rout, at St. James's—The School for Scandal for the 20th time this season.

The Freedom of the City was presented to Lord Rodney—Price One Shilling the Box.

To-Morrow the new Parliament will meet—to be sold by auction to the best bidder,

The Treasurer of Her Majesty's Household has given notice, that—He will pay no debts of her contracting.

A poor distressed widow, with ten helpless children—is in immediate want of one thousand pounds.

The Nabob of Arcot sent his Majesty a present of—Three blankets, and a brass candlestick, value ten-pence.

This morning will be married the Lord Viscount—And afterwards Hung in chains, pursuant to his sentence.

This morning the Queen was deliver'd of a Prince—To be continued annually.

A full board of Treasury will be held this morning—All persons who have been robbed, are desired to attend.

yesterday the five condemned malefactors—appeared at Court in the Collars of their respective Orders.

Yesterday being the last Day of Term—the Villains made off, after doing all the mischief they could.

The most audacious robberies are daily committed—By his Majesty's Royal Letters Patent.

Yesterday Dr. Jones preach'd at St. James—and performed it with ease in less than 16 minutes.

The Sword of State was carried—before sir J. Fielding, and committed to Newgate.

Many changes are talked of at Court—consisting of 9040 triple bob majors.

Friday a poor blind man fell into a saw-pit—to which he was committed by Sir Fletcher Norton.

At a very full meeting of the Common Council—The greatest show of horned cattle this season.

Wanted to take care of an elderly Gentlewoman—an active young man just come out of the country.

An indictment for murder is preferred against—The Worshipful Company of Apothecaries.

A fine Turtle, weighing upwards of 80 pounds—was carried before the sitting Aldermen.

I have long laboured under a complaint—For Ready Money only.

The King of Prussia has wrote to our Court— "if you dant pote fifte powns in a sartin place".

Ready to sail for the West-Indies—The new Mail Coach in one day.

To the curious in perukes—The College of Physicians will hold their anniversary.

I came upon this material by chance while searching eighteenth-century texts for other reasons, and did a small amount of research on the subject. It was striking to me that I could find no reference to Whitefoord or cross-readings in any studies of the roots of modernism. It seems to me that the work of Whitefoord is an important precursor of styles and poetries that would later be called avant-garde, at least in the fact that he stumbled by chance on Tristan Tzara's famous recipe for a Dada poem ('take a pair of scissors and a newspaper...'). The similarity is not only one of methodology. The humour in these juxtapositions depends on an understanding of class inequalities, the contradictions and aporia of party politics, and not least how easy it was – a mere matter of skipping over a thin white column – to expose the contradictions inherent in the mass media, and the interests they represent.

It is probable that some of these cross-readings were in fact deliberately constructed, not 'found' at all. There certainly seems to have been an intelligence in these constructions which, a posteriori, we cannot help seeing as poetic.

Giles Goodland's most recent book is A Spy in the House of Years (Leviathan). A new collection, Floating Capital, is forthcoming from Salt.
Permalink