Although this is "brass, running", the style in which lines are pointed up in a brass rubbing – where smooth surface and indent become colour-block and white space, typically black wax on paper [1] – is a style ambivalently played against in this sequence of
fifteen poems for Elyenore Corp
(†) 23 April 1391
Each poem consists of fourteen lines, some of which occasionally hit a pentameter, though the most obvious patterning is in one or two white gaps present in each line:

Each poem is closely argued – in a combination of images which "carry" as metaphors with lines of thought conveyed in an (often Latin derived) concrete language of concepts – several beginning, as here, with a question, and ending with a turn ("and returned"). The turn often reads as a (provisional) conclusion, which, if it is also a turn, is one that reveals a series of outlines retrospectively, a shifting around 360 degrees in the poem, a complicated drawn shape, a body lifted up – running – from the lines of a brass figure. There are no details of the Elyenore Corp brass itself; no base from which the animation of the turn lifts up: we're left only with a continual lifting-up itself. Forms of escape, often figuring as comings alive, become thematic:

As each poem is followed by another, the same size, so it's possible to imagine an overlaying process. The form of a question is frequently used; though not in immediate succession, they all relate to the body of "her" (Elyenore Corp is not named in the poems, which speak of "she" or "her", only in the dedication quoted above), so a pysmatic effect is generated.

The idea of a line in these poems is as score or cut, "her mouth is a line / cut for grafting" and perhaps "she thinks:     I am / spelt out", spelt out in (a gendered) material, brass which vertebrates, and is polished to simile, "the articulation of youth / is a wall of brass".

There is a definite stranding of images, which oscillate between a spectral or synecdoche-presence and various explicit states. From the first poem quoted above, bell, fish (signs of marvels proliferate), flowers, bees return; there is often a buzzing, or a ringing, perhaps standing in for the indirect double of articulation itself (often seeming to crystallise in the scattered italic quotations), an indirection recognised in these poems, at one point addressed –

– in a manner which recalls Barthes half-asleep in a bar in Tangiers, overhearing unintelligible spoken language (analogous to Watts' "old frequencies"), and thus being positioned outside the sentence, where predication falls away, a position from which to counter "the power of completion which defines sentence mastery and marks, as with a supreme, dearly won, conquered savoir faire, the agents of the sentence" (The Pleasure of the Text, 1975).

This half-dreamed ("fish rising") field from which a critique of power (Barthes' "the agents") is possible, power which draws the lines of the woman (Watts' "the brass holds the line    keeps her    this side / of womanhood    attentuated with each / hundred years") is where the strategic pysma of "brass, running" is constantly pointing, a field where answers to the questions are on the way, to be read back into the text. By completion (embodied escape) and through marks (Watts writes "scored" and "staved"), a structure of temporality can emerge indirectly, if the thought of an outside to language is sustained. In a poem, a form of material outside which is rung, so the text vibrates with its possibility (which is its absence when sense is created). Or an iterative temporality with the power to free (Watts' "refusing its affinity"), and to erase. So the brass runs,

[. . .] if flesh could correlate
the time held in her name     her sheen
innocent of the work continuing     yet
its gentle memorial     and its polishing

---------------
[1] This is not the Elyenore Corp brass, but it shows the typical brass rubbing effect, particularly the kind of rubbing used for records (of course, true artists of the rub continually experiment): 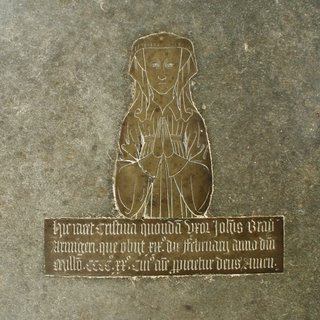 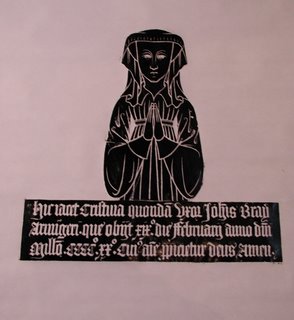