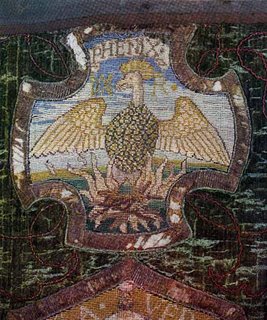 All published by Gargoyle Editions.

Mary Stuart, Queen of Scots, as a needle-woman, was prolific: during captivity, the embroideries often contained messages to her supporters, with a predominance of puns, a way of multiplying the motif. The mobile and the fixed in a perpendicular twining, embroidery can achieve complex effects.

The eight poems in this mini-booklet de-code motifs, and in doing so, find an ineluctable over-coding in the temporal threads between Mary's artistic practice and the present writer writing the hangings, the forms of the poems often shifting sideways, a motif-unravelling "sky blew yelping" made as enjambment-rich poem.

What is it to be imprisoned? The front of the booklet shows 'Phenix'; inside, 'Phoenix' is simply the motto Mary embroidered on her cloth of estate while imprisoned in England:

in my end is my beginning

Mary Through The Looking Glass

"Mmm-wrens sin sweetie." The rolling sounds of this sequence carries "out this mirror flew through" – the mirror is addressed; often it appears in uncanny manner:

Couldn't kill a fish the gasping
mouth of mirror is endless
gawp of sprat.

I get the sense of a looking glass-diary (Mary as Mary Stuart); the pamphlet is pocket-mirror ("mi mirror") sized (whereas Marian Hangings is tall) written in "Woos and ogles", mariner-speaker from a sea of sixteenth century French and Scots boiled up in the heat of a contemporary world-Sheffield diction:

The looking-glass is also a medium; a crazed historicized seeing through time, "corsets" hooked to "exocets". (An early Monk poem is "Dream One *** Missiles"). What's a "rigadoon"? A lively, skipping dance; it is where the red and linear tear runs, to dance out what's in.

The preface note says: "From Nether Edge to Nether Stowey: two words four hours six counties and one astonished heart jolt away." From the middle of Sheffield to the edge of the Quantocks, a diagonal line towards Coleridge.

Which six friends to
cherish till dust us do wear
a ring of hair and
gold and
seed pearls?

Familiar refrains from public litanies are often re-made in Monk's poems, "till dust us do wear" sounding a spectral echo; it is a style which can keep several patterns moving at once, and introduce abrupt stops though the poem continues. Relics at Nether Stowey, Coleridge's "Six mourning rings", each one to be filled with a spike of hair, a deathly gift of the lock, a "luck of hair" possibly a

This wondering over Coleridge's hairy-transcendence is itself an act of mourning? With short poem-pieces on the left, and (mostly) prosey notes on the right (several pieces of arcane hair-lore), the sequence takes the (Coleridge) form of table-talk, two plus one. The idea of death is figured as a test; Coleridge's instructions an attempt to write his own mourning, "weeping wallows". Nate Dorward puts it well, "the final stanza lets go of such an idea in the face of one's unbounded attachment to things and people on this earth, instead settling on a quiet stoicism":

There were no words to
describe. No 'six'. No
'friends'. Death a test.
An earthly. Brooch
bemocked. Ring a
swound. Never a breeze
up-blew.

A more raucous refrain to end on is found earlier, after a note on hair-weaving, hair-balls, and Spanish birthday hair-pulling:

[. . .] It grows after
death this stuff that angels
lust after in the after-
garden of woman. Cock?
Give a good knock. Hen?
Start again.