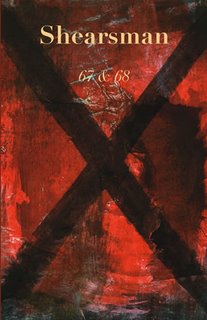 Shearsman 67 & 68 is out with 23 poets in it. One poet I had heard of, but will now get all her books, is Deborah Meadows; I particularly liked the sequence 'Gilles Studies the Blue Cliff Record', a sort of poem-commentary on koans:

Making a gesture of fright: cane
thrown down, a way
of handling the snake.

Obliterate tracks, standing as a state.

Look at your feet as expedient means,
look to the figure within a word
as figurative, by rate.

Meadows has books out from Green Integer and, most recently, Growing Still (Tinfish).

Also, two more of David Miller's Spiritual Letters (4.7 and 4.8) stand out, along with the beginning of a series of 'September 12' sonnet-sized poems from Robert Sheppard, a series I'll be following as they appear, and some extraordinary stuff from philip kuhn, poems which arrange themselves according to the grid of the page, from "blessed bygones in the captive memory", from "block poems", and "fragments and footfalls", of which this is 'fragment 7':

If their words should hurt,
Come with me to the stone fort
On Mount Hatsuse;
Let us hide together there -
Do not pine, my love.

the last remnants of stone
& the single error of concordance -

the blood stained carpet
& the fragments of glass -

lost the gifts of anger
and the curse of his love -

corbels of death etched out of mud -

the curtain drawn
by the gaze of her eye described -

the taint of an epithet -
milk carved into ink

The pieces seem to fill out forms with compact half-aphorisms and, among them, a search through an almost-endless mirroring of sources, for the sources of forms; poems which point to larger fields indicated by & through the field presented. There's a quote from Kierkegaard, "... and the physical ear is too hard of hearing to discover eternity's repetition."The glosses and footnotes perhaps key into this geometry. The "folk song" quoted above is, as a note tells us, one of a series of quotes from Edwin A. Cranston's compelling A Waka Anthology: The Gem-glistening Cup v. 1 (Stanford), a book of facing page translation from the Japanese waka tradition, 1600 poems taking us up to 784, complete with extensive commentaries, notes and "monumental" scholarly apparatus.

From the announcements so far, it looks like a very good year ahead for poetry erupting into book-form in the UK, and I'm particularly waiting for:

Two books from Maurice Scully, Sonata from Reality Street and Tig from Shearsman, will bring to a close the sequence of books titled Things That Happen, the earlier volumes being Five Freedoms of Movement (Etruscan) and Livelihood (Wild Honey Press).

From further afield, my list is longer again, but I note that Kenneth Koch's Collected Longer Poems comes speeding happily towards us.