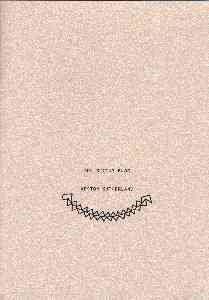 A concentration of strong stresses conveys high pulse excitement. Direct statements of an affective life cut in then out, replaced by sentences where transitions, tendencies, passages - associations - between words have been spliced and mixed gleefully. The result is the transferable grin of The Rictus Flag.

[. . . ] Say nothing
happens and the days waste up you prettify
cough your knees out not
remove inner core through front slot
– same. But,
with the electrons unionized,
fate bent on tongue-ionamines, a fountain
of smoke rakes through, bit-necked
altruism under the stars weigh up chitin on
event speech blackout. [. . .]

(from 'A Hyena Asleep In A Willow')


Passengers on the London train out
the window gravel and paint
tired. Sex is disclosed you took
up the converted hamper flipping
its pointless lock open. I can't sit
and long desperately for you alone.

The first of these extracts deploys hypallage and over-determination of possibilities causing ambiguity; the second contains a middle sentence which switches in at least three ways. Ambiguity may be thought of in these poems as a demotic which expands out from every part of speech, through different tones, specialist vocabulary and forms of address.

'Extreme Sweet' is the opening poem and is also the most compact, four blocks on a page. A fever of ironic Romanticism cut across by sexual order-words –

Instead of ropes the descent in
autumn from the trees belongs
to leaves agitated by our rapacity,
by any exit. Throw your legs open.
Heartless blood in the wind, thin
spaced eyelashes and cars,

tossed there and all glassier than bat
breath on your mirror. [. . .]

– so that the Romantic wind picks up "heartless blood", throws cars around. Wordsworth: "Is it a reed that's shaken by the wind, / Or what is it that ye go forth to see?" (Calais, August, 1802).

The poetry in The Rictus Flag can also read as bundles of associations dropping down to fill up the stanza shapes. In an exchange with Chris Goode (reproduced in Quid 10 iii), Sutherland determines, "A condition promoting focus may at the same time make that focus more difficult to achieve; differently put, I often intend to concretize in poetic language the real ambivalence and perplexity of focusing". Focusing on what? Sutherland continues: "I struggle to fixate upon the infracted image of what I am as a generalization attesting the administered suppression of human particularity, and to force that image squarely to the front (rather than the centre) of my poetry, claiming responsibility for it as noisily as possible, again in order that the objective and painful limits of my responsibility in a society overdetermined by Capitalist exchange can ring out clearer and more violently."

This could be describing a process figured as a not-mechanical camera designed to produce a negative of the impossible: a lens of perplexed focus struggles to produce an (infracted) image which, scored and fuzzy from the focusing difficulty, is itself an aperture through which "interpellation's fire" (1) can be seen, and therefore felt. "I believe that the peculiarity of art is to 'make us see' (nous donner à voir), 'make us perceive', 'make us feel' something which alludes to reality" (Althusser, 'A Letter on Art in Reply to André Daspre').

Althusser goes on to speak of how Macherey has extended Lenin's critique of Tolstoy: Balzac and Solzhenitsyn "make us 'perceive' (but not know) in some sense from the inside, by an internal distance, the very ideology in which they are held." For this seeing - or something approaching it - to be present in a contemporary lyric, Sutherland must fixate on what I am (2) but only in a defiance which spirals around in the energy of its not quite being possible.

Threads which reappear through these six poems include: different forms of thread ("chitin", used in surgery, strong but over time dissolving; fabrics; polyglactin), democratic representation, the wind, life diminished or withheld, parts of the body as it were de-centred (turning to dust, engaging with other bodies, falling off). How is the focus disturbed; what is visible? A full text of one of the poems, 'Ode: What You Do', is available to read at Poetry Review, so I'll end with a few notes on that:

What does Eros permit? Reading Sutherland, it will not be long before a line such as this appears: "Sabra and Shatila thread through // love" - the ethhical implications of such a stance are perhaps what imbues the final line of part 1, when I read, with the sound of a cry: "The ring of fire shines and divorces." The painful limit? The safe perimeter of sleep? This could be followed to part 3, "get soapy // life mere twist into synecdoche" - where part standing for whole is a "shredding" - in "dreams", or is it illusion, instead of error the real danger for thought. But I have skipped part 2, which brings a focus on unhappiness, depression: is it a wound, does it need stitching ("vicryl")? Autologous: In blood transfusion and transplantation, a situation in which the donor and recipient are the same person. The sentence which begins "I don't walk to the / bus stop" and ends "he hides and then buries his face" enacts in miniature many of the difficulties of focus: how does power affect the body, shifting out - or vaguely drifting on - to connections with steel, tree, disgust, from first to third.

These readings could then be followed into the subsequent parts of the poem crossing (in 4 an orgasm "sneezes away news", in 3 "You dust / off the mimic, dust away my eyes" could be tears, connecting in 5 to "my bent eyes scattering salt over") over, contradictory crash.


----------
(1) Denise Riley, The Words of Selves. The biblical overtones come from Judith Butler's discussion of Althusser's interpellation as theological.

(2) In the aspect of the particular generalization, I'm reminded of Badiou quoting Lin Piao with approval, "that the essential thing was to be, at a revolutionary conjunction, both its actor and its target". Alain Badiou, Ethics: An Essay on the Understanding of Evil. Trans. Peter Hallward
Permalink