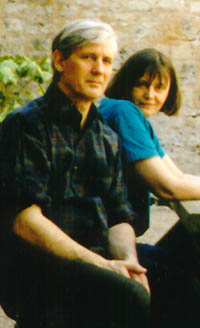 "Consider the bigot, how he spins."

"The colonels dissolve into tortures."

"Under old caves memory shadowed
rotten teeth of mildewed thatch
again in Dorset of William Barnes
revisiting metaphor and simile after many years
for the sake of those years
House martens' rinsed noise
as white rumps dart in and out of wall nests
on their own summer revisit
Corn laid by storm loses fullness
but earth recuperates the gain
Corn clothed
cloffed
corn clothed and dragged, laid against the standing stalks,
corn like an upwards rain"

"Cirrus on blue above.
Matt black fighter plane
dropped in the road by a child
sets its heel on the sparkling tarmac,
the silhouette of it skids about and becomes
curling tyre marks"

[#] 'Of bigotry and idealism' (from Whisper 'Louise', Masthead)

[#] Introduction to a selection of Diagram Poems in A Various Art

Poem: 'Our Generation (for Steve Carey)'

A Lament for Douglas Oliver by Ian Ayres

A reprint of Nicholas Johnson's obituary from The Independent (not The Times as stated at the site):

"Robert Louis Stevenson, who wrote Dr Jekyll and Mr Hyde in Bournemouth in the 1880s, became one of Oliver's heroes, an instructor in 'how to wrestle with the presbyterian background in a way which restores honour to the parents.' Stevenson's house (Shelley's manor), King's Park, where Douglas and his brother Brian watched boxing matches, and Christchurch harbour, where he studied sea and shore birds, were childhood haunts."

[#] Andrew Crozier's obituary in The Guardian

"with spacetime talk, in rested weeds"

[#] Catalogue of the Douglas Oliver archive at the University of Essex

"This book can be seen both as an individual component of 'the whole life's work' and as an attempt to summarise and reflect on that whole. For Oliver there could be nothing serene about such an undertaking. The responsibility of engaging with a 'whole view of life ... means that there's this political, historical and personal journey to undertake before I can reach towards a poetics'."

[#] Jon of Posthegemony writes two posts on The Diagram Poems: 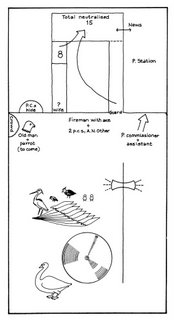 "Oliver's poems--and the all-important diagrams--are neither celebration nor condemnation of the Tupamaros. They are, perhaps, an attempt precisely to diagram the forcefields within which they operated, and into which they intervened."

"Oliver is a great poet, not especially difficult to read but decidedly difficult to pin down, and this is due to something rather paradoxically particular and defining about his poetry: its adherence to poverty. [...] Poverty as a lack or weakness at the heart of some system, be it social or intellectual. This lack appears as a sign of the system's limitations, its inability to systematize absolutely everything."

"Richness Oliver can do. The poem treats of the 'Voodoo-Haitian' Emen, her Anglo-Scot poet husband Will Penniless, and the birth of Spirit, a new political party for the non-voting U.S. majority ('Make material wealth for other people, spiritual wealth for ourselves')."

"A central piece here is 'Future Circles' in which the Oliver talks to 19th C. French revolutionary, Théophile Ferré, and his girlfriend Louise Michel, at the back of a New York bus."

[#] Review of Arrondissements at Terrible Work

What Fades Will Be (1993, Poetical Histories)

Three Variations on the Theme of Harm (Paladin, 1990)

In the Cave of Suicession (Street Editions, 1974)

Links maintained by Edmund Hardy. If you find a broken link or an Oliver page overlooked, please get in touch.
Permalink