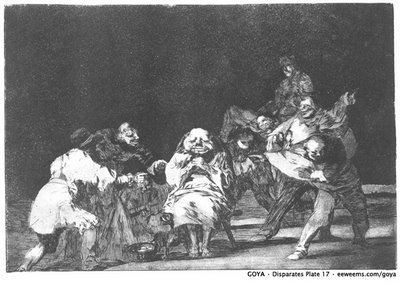 These are lines from Geraldine Monk's 1980 Writers Forum pamphlet, La Quinta del Sordo, which is (roughly) The House of the Deaf Man, famously the name of Goya's two-story rectangular (according to art-historical research) cottage outside Madrid. Goya bought this in 1819, painting the "black murals" in oil on the walls. During the first five of the nine years he spent in the house, his last nine years, Goya also created Disparates ("Follies"), a series of etchings, the final grotesques from the sleep of reason.

The wax and acid of etching: the words in their formations, centred, prose with blank gaps, residual lines, the metal plain of the manual image of which paper can receive the print, printing as that moment in which paper is "awoken from its nightmare of whiteness" (Bachelard, The Right to Dream). Monk's hand often steadies itself against existing material - Goya, Hopkins, the dirge Lyke Wake, Donne - and runs resist and acid to deepen cuts, force new marks. Of La Quinta del Sordo Nate Dorward writes: "Flesh has become liquid or wax, so that distinctions between one, two or many figures are effaced." 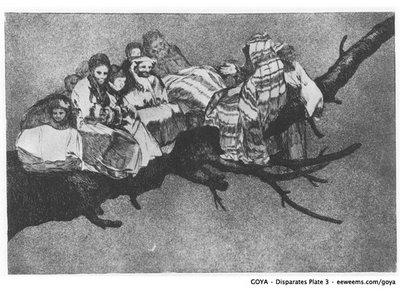 The etching which depicts a group of people clustered on a black bough provokes Monk's "We are gathered here today...", perhaps the sermon given by the shawled figure addressing the others, the words which wash through the gloom,

How can a twinned voice, which is double, attached to itself, speak out? Goya's siamese figure, "You will go where I go where I and you go. . ." Goya imagines this conjoining (from the picture, it looks like Ischio-omphalopagus, a Y shaped spine) as a burden, with the dominant twin taunting a crowd. Monk writes,
Let us reckon hard
with this block vengeance
Monk's wash of voices over these etchings reveals a technique of spoken dream, an oneiric space in which the image of the social has become unbounded, bodies without border: to write, to etch, to create surfaces by outlining them; to make marks upon the strongest material. To superpose perspective on perspective. Come, before the terrible sack race is lost. 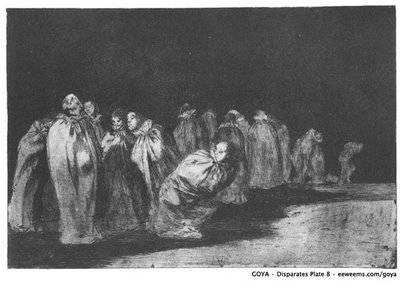