Choreography's favourite prop: the blossoming of the rod. The drab docks of Cherbourg, the camera pans down, a horn sounds: spots of rain, people open out their umbrellas and Legrand's beautiful music comes on with its terrifying unhooked sentiment; that first red umbrella opens just as Catherine Deneuve's name appears – then yellow, red, pink, pastel blue, lily-patterned, green and yellow, this is Jacques Demy's choreography, the reverse of a Hollywood musical in which the individual's dream-steps animate the world, for here the city's seamed grids of classes, passions and enchantments cool and heat according to the ongoing song, a song which completes the city in a circle, a set which slides the characters. 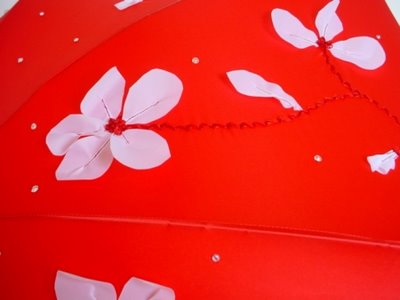 Of course, when you return from Algeria and go to the umbrella shop where your first love worked, where your heart seemed to think itself in the very building as its atmosphere, then you discover that the shop has changed hands, and is now a washing machine showroom.

"Para-pluies", sung with a rise, as spoken, as if the "pluies" is the canopy – in English the word "umbrella" is performed by Odetta in the old penitentiary blues, "Midnight Special":

Yonder come Miss Rosie, how in the world did you know?
By the way she wears her apron, and the clothes she wore.
Umbrella on her shoulder, piece of paper in her hand;
She come to see the govnor, she wants to free her man.

But the word umbrella is stretched, sung as "umb-er-rella", as if the word is twirled around, a true sign of freedom as perceived from the point of view of incarceration, the space of joyous propulsion. Mike Neely has noticed this element of Odetta's singing style, writing in All About Jazz magazine: "Her phrasing extends syllables and words, pulling them up short, using spaces and silences, pitch and volume like an accomplished jazz musician."

The Idea of the University as an umbrella: – the Latin umbra, as a place, means "shelter, school, study".

Nietzsche wrote in his notebook, "I have forgotten my umbrella", and it was only a matter of duration before Derrida wrote a commentary on this fragment (in Spurs: Nietzsche's Styles). After three pages he gets to the nub: "It is mine. But I forgot it. I can describe it. But now I don't have it anymore. At hand. I must have forgotten it somewhere." Taking a psychoanalytic turn, Derrida goes on to reflect, "One doesn't just happen onto an unwonted object of this sort in a sewing-up machine (machine à recoudre) on a castration table." Endless anguish or amusement in reading a fragment, as "There is evidence here to expose one, roofless and unprotected by a lightning rod, to the thunder and lightning of an enormous clap of laughter." The text is unfolded and then it is closed and then you've forgotten it and it rains again.

Umbrella design, inherently blasphemous, providing shelter outside God (the Bible makes the metaphor first, "The Eternal God is thy refuge"), must smoothly stand against the myriad mathematics of rain: The signature of Ombrellificio E. Pasotti's style is the classic line of beaded brollies, as if the rain is transmuted and fixed and waiting for itself to fall into an already-ideal. Sometimes the rain is prefigured by a starry polka. In Paris, the Gautier silhouette is typically a variation on a bell, a shower becoming a thousand outside-tongues to patter and ring. Those children's umbrellas which appear to have "ears" present the trope that one's skull has developed a new outer layer, which is itself a drum for listening. 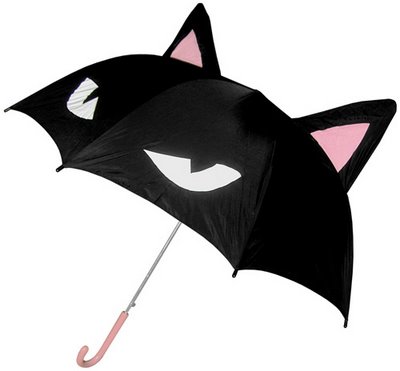 Perhaps even an outer form of blind seeing.

Vilém Flusser considers 'Shelters, Screens and Tents' (essay in his The Shape of Things) to be three related attempts to use a sail for the wrong purpose. But this stupidity gives rise to a history. For Flusser, the umbrella is as ridiculous as a tent; less useful than a parachute. Bringing umbrellas into conjunction with these other screens (rain screen, Regenschirme) Flusser – for whom umbrella canvas is a form of tent wall – continues: "In a house, things are possessed . . . In a tent, things are experienced. . . The fact that the tent wall is woven – i.e. a network – and that experiences are processed on this network is contained within the word screen. It is a piece of cloth that is open to experiences (open to the wind, open to the spirit) and that stores this experience. Since ancient times, the screen wall has stored images in the form of carpets..." and then as paintings, cinema, television, and now, with the internet, an immaterial wall of diversification: there it is above us, the umbrella, "The screen wall blowing in the wind assembles experience, processes it and disseminates it, and it is to be thanked".

Sci-fi umbrellas: Blade Runner opens in the Chinese district, everyone carrying an umbrella with a strip-light as handle, making this shelter more flashily domestic, a neon hearth for a family of one out and about.

Marcel's childhood friend (in Swann's Way), Bloch, who introduces poetry to him, was not long welcomed by Marcel's family. Bloch seems to stand in as a peculiarly nineteenth century radical, a social immaterialist:

He had begun by irritating my father, who, noticing that he was wet, had said to him with lively interest:
– Why, Monsieur Bloch, what's the weather like? Has it been raining? I don't understand this at all, the barometer couldn't have been better.
The only answer he had drawn from him was this:
– Monsieur, I absolutely cannot tell you if it has been raining. I live so resolutely beyond physical contingencies that my senses do not bother to notify me of them.

– Why, my poor son, that friend of yours is an idiot, my father had said to me when Bloch had gone. My goodness! He can't even tell me what the weather's like! Why, nothing's more interesting than that! He's an imbecile.

The final outlawing of Bloch comes just before a long-delayed lunch, when, turning up an hour and a half late and covered with mud, instead of apologising, Bloch says:

I never allow myself to be influenced either by atmospheric perturbations or by the conventional divisions of time. I would happily instate the use of the opium pipe and the Malay kris, but I know nothing about the use of these infinitely more pernicious and also insipidly bourgeois implements, the watch and the umbrella.

This is the umbrella's outside presented as high satire. A few pages later, Proust's prose transfers itself to a transparent screen:

A little tap against the window–pane, as though something had struck it, followed by a copious light spill, as of grains of sand dropping from a window above, then the spill extending, growing regular, finding a rhythm, turning fluid, resonant, musical, immeasurable, universal: it was the rain.