Emma Lew, Anything The Landlord Touches 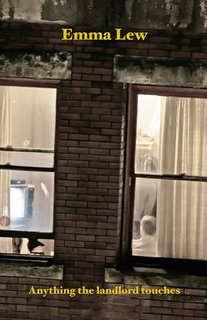 
Emma Lew's poems are often narrated in a style of high romance which approaches the necessary vagueness of Mallarmé - that idea of a poem which "is a vague idea" (Barbara Guest) - but there's a problem: one or two crystalline, memorable lines, surrounded with cloying statements of swooning, hurt prettiness, this same claustrophobic tone repeated in a limited number of variations, over and over.

Shoes of the Morning Star

He moved the sky and the sea's identity,
and from the forest came harshness.
He knew the scatter of all blown leaves,
the multiple small shadows. He needed
grandeur on the outward journey,
and his aspirations - a slip of moon,
the most broken trees. The low horizon
struck as a child. Echo came to him
from the shut-in town. It was like a rain,
the world, and his eyes loved faint things.

A montage of bright phrases stick themselves to a glossy surface which is trying to coat "the world". The work is flooded by a continual overload of the same words - moon, beauty, beautiful, wound - and a love of the total image: "It was like a rain, / the world". The one line above which introduces a brief intensity of thought, "The low horizon / struck as a child", is left to dissipate among the tiring glitz. There is a typical slippage of registers "his aspirations - a slip of moon", a slide or swerve which could be described as intense. These swerves seem to stand in for any actual transitions in the work.

The poems are more successful in their Browningesque range of historically-outfitted misfits speaking in the first person, including the naïve confession of a murderer, "It's sad, but I don't live there anymore" ('Prey'), and a number of poems staged in an impeccably vague Russia of espionage and revolution. I tells a lie, and everything is in place for a poetry of pretenders to the throne of voice; the recurring mention of wounds, my "sparkling wound", would fit neatly into an idea of staging disembodied persons, shot through but presented as blown about on the particular storm of a sociological milieu.

No lack of ambition, then, and when the same moon is dusted off from poem to poem, the effect is indeed one of rude mechanicals. Justin Lowe registers a similar dissatisfaction but from a different perspective: "an East European sensibility, steeped in allegory and a kind of moral autism, borne of decades of war and tyranny [which is] . . . perhaps closest to this reviewer's heart, and, in the hands of masters such as Zibigniew Herbert with his delicious bent for wry allegory, is the nearest the 20th century has come to some form of redemption. Unfortunately, Emma Lew borrowed the clothing and not the walk."

What a wild heretical light
when day bursts its filmy skin,
and pain's already in the wind,
and the sun sees itself
shattered into air,
and thunder
shivers down,
so frail now
in the lost roar of rain,
and clouds stay close
but with a hunger,
and the birds are still,
and their stillness
hurts more than their song.

Pain, frail, roar, "their stillness / hurts more than their song", this is strained, at best a pale imitation of the "pure abstraction" of many a surrealist poetics, and despite that early promise of "heretical light". Yet, as in nearly all the poems, there is also a phrase which seems to have dropped in from more accomplished work, "thunder / shivers down". This is closer to the intention that Lew has stated in a working note: "An instant of tremendous surprise and disorientation, at once disturbing and thrilling; a feeling of being violently reawoken that was delicious and compelling."