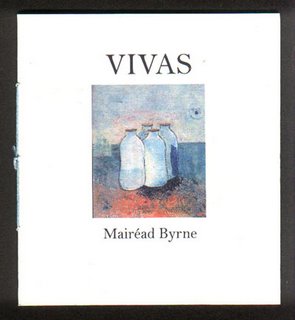 Mairéad Byrne's chapbook begins with an ending and ends with 'Steve'. Vivas, a cry of long life which is also an examination by speech. The square shape of the book is filled with Byrne's very short poems and blocky prose poems rather than the many looser, "billowy" poems seen in Nelson & the Huruburu Bird, a closing in of form. The concentration works, and variety is not lost.

The prose poems tend towards farce or at least the stage directions: 'CHIASMUS' finds mixed up dreams after divorce, "There you are on top of the Ross Ice Shelf . . . when it hits you right between your frost-rimed but piercing eyes: Wasn't it X's dream to lead an expedition to Antarctica? What am I doing here?" It is farce which doesn't have time to lag or dull, and it is farce also in the sense of matter, in-filling between larger concepts which are brought into relation. Three further prose poems are film pitches, one of them about Vermeer and that girl with a pearl earring, "It's very realistic & shows how a simple & profound reverence for art transcends class gender & all other barriers no problem what do you think?"

Another pitch is for a movie of Gerard Manley Hopkins and his friendship with Robert Bridges ("hey maybe we could get Jeff Bridges to play him"). The careers of directors seem to be already littered with unfulfilled film ideas, a literary genre in itself: Peter Biskind in Easy Riders, Raging Bulls (p373) reveals that Francis Coppola, excited by the prospect of a digital technology, harangued a roomful of editors for several hours during post-production on Apocalypse Now: "Word processors had just come out, and he described them as the key to a new way of making movies. He wanted to do a ten hour film version of Goethe's Elective Affinities, in 3D, which people attributed to Melissa's influence."

Byrne's interest in obituaries and in found poems produces the starkest piece in Vivas, 'YEAR AGE LIFE', a life from 1572 to 1631 which is given only as a list of deaths, births, stillbirths and further deaths. It is the life purely narrated but not detailed. Sympathy is raised not so much for a person as for life and the life-itself of a woman.

Two small sculptures, the qualities of milk bottles listed, a bagel and a celebration of that female Y - uncluttered by "greedy" Joyce (on whom Byrne has written a book, Joyce - A Clew) and Molly's v - in a short poem called 'AT THE Y' are also a part of the mix, and there's more as well.

Finally, what about Steve? Who he? 'Meet Steve', the last poem, works in an exuberant style which catches a lot of other possibilities - some painful - up into its good surface, a characteristic Byrne effect. "Steve is also a part-time Dell technician. If you spill ginger ale on your laptop for example, Steve's your man. Steve runs a workshop from his backyard." Steve is described, a good man who does everything, a sort of blueprint, a father, a "demon in bed", a man who cleans the toilet and will "do a more thorough job than you", and so on, all with a deliberate pentimento as the men we do know in our happier and in our darker experiences are pointed up just at the point when Byrne says, "Well I guess you probably know a million guys like Steve so I won't go on and on about him. That's it from me."