A note on Douglas Oliver's 'A Salvo for Malawi' 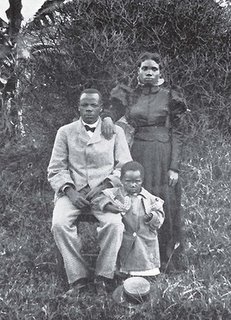 John Chilembwe with his wife, Ida, and daughter, Emma, in a photograph probably taken between 1910 and 1914.

Ostensibly, this is a biography-poem of John Chilembwe, the anti-colonial rebel, Malawi's hero for independence whho staged an uprising on January 23, 1915. He was killed by colonial officials on February 3, while trying to flee. In this biography-exemplar form 'A Salvo for Malawi' is not dissimilar to the short prose-poem-biographies of public figures which are spread through John Dos Passos' U.S.A., the first one in The 42nd Parallel being 'Lover of Mankind', about Gene Debs, union organiser and rhetor, Dos Passos' prose cut-up into a poem, punctuated by snippets from Debs' own speeches, just as Oliver's poem is cut across by a letter from Chilembwe to the Nyasaland Times. Oliver's tour-guide poet -

- blends into the voices of white Nyasaland,

Who knows what he preaches in that church of his?
Africa for the Africans, I suppose.

And there is another voice, which is ours, the reader, appropriated into italics,

I've heard enough, you say from your future,
of the deaths of three whites
in one murderous gesture I may not condone.

The questions for Dos Passos and for Oliver is: What happens to time itself, as it is distinct from memory? How does a life of activism present a figure which resonates? In what time does an active life still live? 'A Salvo for Malawi' states that Chilembwe lives:

He's still alive as he turns
just a second before the shooting;
and so I may tell you his story,
not tapping into memory but into time,
and refire the first salvo for the end
of white hegemony in Central Africa.

Yet the sophisticated juxtaposition of elements is itself turned upon:

whose shiny liberal shoes walk over these memories.
But where was Chilembwe?

He is lost, from this "future", and Malawi is at points lost to the poem, it must be brought back, runs of sharp description must be cut back - and then, finally, Chilembwe is a "haunting" to "our sadly avaricious, racist British lives", shadows outside a "cosy house". This is the point at which tour-guide rhetoric collides into a personal encounter:

Not even Chilembwe's religious myths
pass away, though in my own beliefs
no man was resurrected
after any Calvary except in strange survivals

This is one such "strange survival". What happens to the structure of a revolutionary moment? 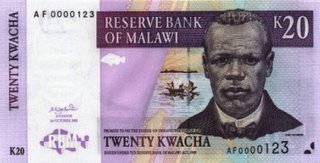 What happens to it when the leader appears on a bank note? Can the moment be "re-fired"? Time, not memory, and "all our paradoxes meet in Chilembwe's life." If they do, it is because the life of a rebel is endlessly chaotic, a patterning which cannot be resolved and so the poem must admit of continuous flaws. Oliver's structure, which combines the practise of historical description through first person narrative slants, Chilembwe's documentary voice and the chorus of readers, is designed to perform this re-firing amidst the paradoxes, zone of convergence.


--------
'A Salvo for Malawi' is a poem in Douglas Oliver's A Salvo for Africa (Bloodaxe), and it is also included in the Iain Sinclair edited anthology Conductors of Chaos (Picador).