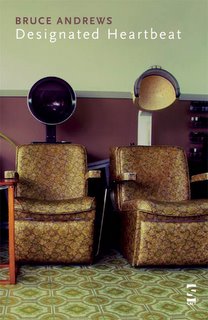 Andrews' essays in poetics describe a work which is to come, but which is deferred. This book, however, is here: the poem I particularly liked is from a series called 'Time Expansion':

Indelible licks, majoritarian kisses: spaced out, this aphoristic lyric is polystyrene packed. No proportional representation for the lips? Each kiss, a constituency. Is the text dismembered, or full-blown like a white rose?

'Definition' is a short dictionary of the less received ideas. There's no definition of bananas, so they aren't the example here, but I liked a dictionary which encompasses

while allowing a certain mordant fun to flourish in miniature

It could be simply word-association -

At first, one might think that a randomizing process had been used for word and definition, but then deliberately clever effects seem to be thrown up a little too often. The set of relations named Bruce Andrews has been here and orchestrated them.

A commonplace, a joke, a random correlation, an urgent insight?

'Black' lists 28 white things. 'Somehow That's Just The Way It Is And I Just Don't Really Care' uses a lot of dashes and contains the phrase "Horizontally speaking". The word horizon has a certain precedence in Andrews' work. As he wrote in his contribution to the Bernstein edited Politics of Poetic Form, "To 'horizon' - as a verb, an infinitive - that is, to grasp what the animating pressures (or constructions & arrangements) of intention & desire are given, are up against, are faced with." To foreground, and now, to horizon? If you take one rhetorical form of words, then rip it to insert new contents, "FACT - bust not want not", then this is a form of witty parallelism, and Andrews deploys it throughout Designated Heartbeat. The opening poem, 'I Knew The Signs by Their Tents', begins:

This is more control panel than wit, the poem shuttling its pressure across a surface and bringing to paper only these particular words in relief. Not a few poets seem to imitate Andrews - in his various modes - but really there's no need as the real one publishes a new book quite regularly, and when he does, it shows again how he performs whatever it is he does perform for you the reader with a recognisable value-add, so "let the jettisoning begin".