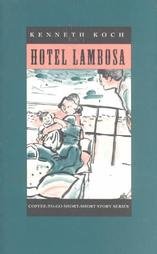 This follows parts one, two and three as a review of Koch's Collected Fiction.


Hotel Lambosa (1993) is a collection of short-short stories, published 18 years after The Red Robins. The stories switch around different degrees of autobiographical disclosure. In his interview with David Kennedy Koch described the writing of these pieces, "like a certain kind of magnet, writing prose picked up details that my poetry had never been able to pick up". One story is about that moment when you realise your girlfriend Delia is taking on some of the powers of Artemis. Another, 'On Happiness', relates a café-table conversation at the Place de la République, a theory of a "happiness base" from which moments of pure happiness arise. Koch often tries to pull back a veil to reveal a frame, then another frame – a libretto synopsis, how the libretto relates to the life of its writer, then the finishing of the libretto by someone else who incorporates into the libretto his research into the original circumstances of writing the libretto – and these pieces prove less compelling than the ones enfolded in simpler conceits, though the libretto does apparently contain this filling-station couplet:

There are several early mentions of rabbits. 'Impenetrable Life' focuses on them: "The rabbits were startled and began to disappear. Disappear is not usually qualifiable, but what the rabbits did was to dart then freeze, which gesture they, like certain tribes of Indians, believed made them invisible. Then they started to run the rest of the way." I wonder if these stories are formed of a life's memory darting in various directions, freezing into short prose so the writer emerges, clearer, having disappeared into the work. The tales are of a young world, young marriages, different locations – Italy, France, Africa, China. Bright scenes, telling moments; down the page, sensation gives off a sheen and becomes sentiment, over a reveal of time or with a sudden trope.

Too many, however, come off as slight, particularly compared to the later poems that Koch wrote treating his life and its zones, though a few stories do accomplish a comparable mixture of delight and affection; throughout, phrases, jokes and descriptions continue to entertain. And how did the Mediterranean form? "Deeper than this were the groundwaters of which the Mediterranean itself would be formed, one fine morning when the chill wind blew over from the Atlantic and the hot from the Sahara, until the rocks and bitter thyme and pollen said, 'Here we have a sea.'"

The New Orleans Stories, written 1993-2000, are seven loosely connected chapters about a family of junk dealers-cum-gangsters living in that city where the sun shines "like fury". Pop carries out violent deeds only while dressed in a red bird suit with knife-like wings. Victims' testimony is thus rendered ridiculous. The chapters cycle through the days of the week (plus Christmas) and are narrated breathlessly by the young Son; each chapter emerges from the middle of a blues-like lyric:

Doin' nothing
Sittin on the stairs
You Mom and Pop there
Nothin compares
To New Orleans Tuesday . . .

The final piece in this Collected Fiction is The Soviet Room, Koch's last prose work, dated 2000, a short story about the room set aside in an apartment where "people could sit around and talk about Communism." This Soviet Room is ten feet wide by thirty feet long, cramped "Like 'a corridor of history through which we, with the rest of mankind, are passing' as one of our visitors said." It could be a late story by Doris Lessing, sarcastic about the old faith and a little wistfully frightened still by its commitments. "One time Ashkenazy spoke to us, of some aspect of Soviet mining, and we were enthralled." Disillusion and desertion cause the Soviet room to become a closet, full of clothes, and yet, years later, a Russian ermine coat appears. . .
Permalink