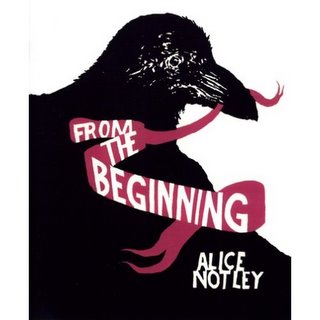 
In Alice Notley's From The Beginning short sections of prose mix with short lines, bold text, white space. It is a book-poem of 25 pages, composition dated 'June-July 2000', a book, it seems, of grief. It begins:

He it is I must think of and I do starting over. He sits up in the bed across the two-room apartment wearing a dark halo because I need to be free of the death.  I need to be free or I will not continue and knowing this well from experience though I love him.

He, "the dead man", is present or referred to on most of the pages, and, later more explicitly but throughout, he is in particular relation to a black bird which has brought a swatch of red (as in the beautiful cover art by Will Yackulic.) The swatch is "an appeal for help", the bird a soul. There is also a shadow-woman, "She is in the wall where the table is the wall is there behind it white while I type. She is clearer. She turns and then turns back placing things gotten from behind her on her own shadow table." The shadow woman speaks towards the end. On the first page, the man is reading a book, the title of which keeps changing from the book of daniel to the book of the dead, and the poem's voice says,

I'm trying to read the pages, I see the word hurting, arrows, firm.  Perhaps I should try to read it from the beginning

What follows after this is partly a description of the book's pages, "Just picture the blank pages & see what they say". The book can answer:

What, Page, is the swatch asking me to do?

Seeing him home, and needing "to be free or I will not continue", is what seems to turn the pages, write the poem. The red swatch absorbs, red cloth carried, the healing of the "edgeless" self – the I which "wears clothes and makes claims by habit".

The large and frequent spaces are an agony, "all spaces stand for pain". C. S. Lewis, at the beginning of A Grief Observed, noted "I almost prefer the moments of agony. These are at least clean and honest." Lewis also wrote of a different kind of cloth handed to him, "There is a sort of invisible blanket between the world and me". Alice Notley's own honesty can be startling:

he's there for awhile every morning. 'I love you forever,' I said to him during his dying; the terror of saying that a corridor.

Notley's prose reads in lines: "She is in the wall where the table is the wall is there behind it white while I type. She is clearer." The first sentence here contains two beginnings, the second "is there behind it" overlapping and propped on the first part, then "white while" slows us up, so "I type" sounds punch-punch, as typed keys. The second sentence, three words, provides a clearing – in which I imagine the shadow-woman though Notley has not described her, simply opened a musical space like a dominant chord in which "She is clearer."

The Notley book that has a similar structure is Close to me . . . & Closer (The Language of Heaven), a dialogue between daughter and dead father. I was wondering how the will would figure in From The Beginning - as an idea of the will is elucidated in different ways by Notley, to the fore in Disobedience – and here, the will is burned,

the color of pain is
burning
the will
burns
for anyone
knowing
how.
it isn't mine now

The poem itself is a sort of fire-walking towards a healing, "I walk across the pain on the page".