From the late 1620s through to 1660 Rembrandt made a series of landscape drawings and prints. With pen and ink and sometimes chalk he walked around Amsterdam and the surrounding lands of the Amstel and Vecht, a non-specialist in a very popular art. In these works, the landscape is a horizontal band of reality on which the artist scribbles his upright marks. The most prominent of these marks is the territorial post, the banpaal. They sometimes mark the halfweg stage between two towns but they can also mark the boundaries, the perimeter which banned people couldn't cross. Many embellish the possession of distance. By the 1630s some the banpaal in Rembrandt's landscapes is often a very substantial obelisk. The 'Farmstead beside a Canal' (1650-52) below shows a lamp on a tall pole, light to push away, to keep. 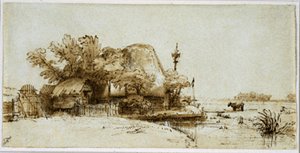 The stolp farm with its enormous triangular roof is effortlessly classical in drawn geometry; roof-tilers and thatchers are the artists of society, this is the conical border between law and the nest. Windmills, from whatever angle, create an x, a vote, the eyes of the city, constantly showing a new glint of white, signs of condensed population centres. The most detailed examinations of windmills and farmhouse buildings are the drypoints of the early 1650s, after which the sets of relations between buildings and the land come to dominate the work, with the buildings themselves often partially obscured by trees. 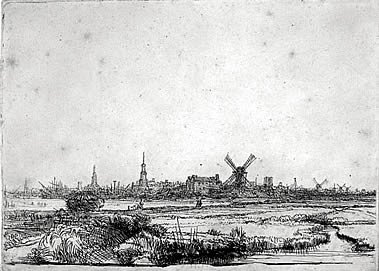 If there is a boat it is typically a schuytje, a low, flat work boat. Down the canal, my companion and I float, and suddenly, from behind the infinite horizontal plane, the expanse of polder, there is a rocky outcrop or a cliff, as if imported from Titian, one of Rembrandt's supreme guides along side Mantegna. The landscape gets feverish, a ruined column appears amid trees of impeccable hatching, the tangle of wind in the leaves, force deflected as it passes over and through the structure. There is the farmhouse but with sketched-in cliffs of fantastic aspect rising up at its shoulder as if the sky were a place for a demonstration of landscape postures. 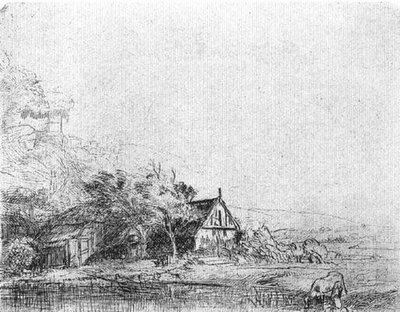 A light brown wash can make the horizon and the land fade into vague and indistinct marks, such as in 'View of Haarlem with the Saxenburg Estate' (c.1651). Then a brush of brown ink delineates a panorama of dunes. The re-arrangement of motifs - town, dike, polder, sea, farm, banpaal - is the fantasy which requires the real earth to be its substance.

Did Rembrandt read Karel van Mander, whose 1604 treatise on painting contained a lengthy discussion of landscape art? The work is not listed in any of his inventories, though books of Bruegel prints are present in 1656, and the vocabulary of dots and lines is well learned from Bruegel's mature drawings (such as 'Landscape with Saint Jerome').

The styles of a rural vista are always changing. Below we see a classic langhuis (one long room) being extended. The birds gathered in a stream towards the dovehatch are to be lured within and eaten as cheap meat; the economy of uprights on the flat, one horizontal pulls on another and consumes it. 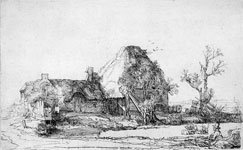