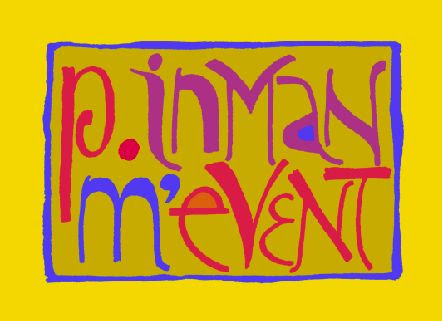 
As with the others in this series of Matchboxes, P. Inman's m'event comes in an actual matchbox. Inside are five matchbox-sized pages of squared paper on which Inman's poem is typed, with certain of the vertical and horizontal lines ruled in with pen. Actually, these lines are sometimes to one side of the squared paper's lines and there is one vertical line equidistant to two of the paper's lines.

Inman himself has said that he isn't a neologist because he doesn't like the idea of coinage and doesn't see such ongoing usages extending out from his poetry anyway. No direction, yet glancingly, "pers'p. bl'ocean" is close to being absorptive as oceanic perspiration - as the title's "m'event" is ripe for me-vent, me-event, M-Event (in a code)...

The drawn lines - which pass through words to form blocks, yet sometimes mark off blocks of letters - would seem to be an example of the "horizontal" pull of connectivity, a punctuation of the (small!) page space which is already over-punctuated by the already-grid of the squared paper. A vertical line passes between the two p's in the word "wepp" above. Parts of a much larger circuit board; speed-bumps for the eye to slow the reading down; or lines which are edges. A neo-plastic grammar. Here a vertical line edges the c of "chamber" and the ( of "(talk":

With the ubiquitous happy or unhappy faces in communicative prose, it's sometimes difficult not to read Inman's brackets as mouths, "chocolate)", though they also blink open and closed, or are left open, or were always open on that page. Put the five (loose) pages together, an array of crossing, cornered graphic lines, and you might have an impossibly flattened but possible tesseract, though it arrived in a matchbox.