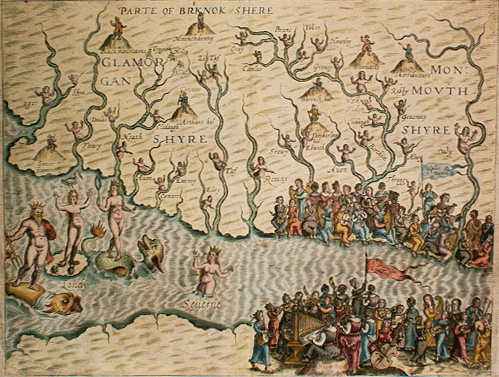 a map we use for navigating

The Midnight begins with the interleaf between image and text in a copy of Robert Louis Stevenson's The Master of Ballantrae. This gauzy protection becomes a curtain and a border, a tracing and a two-way true paradox, a "dialethia" as Howe later discusses it. But it isn't just any copy of the Stevenson: it's John Manning's copy, or Uncle John, as Howe at one point calls him. Many other pictures rival the text in this book – scribbles, marginalia, slips of paper on pages, portraits, and perhaps best of all, a double page of William Hole's first-edition illustrations for Drayton's Poly-Olbion, like the one above but not that one.

Every river with a nymph, no mountain without a shepherd. But Howe also writes that "Names are only a map we use for navigating". In this case we are navigating through a "document universe" – of markings and boundaries, parks and security guards who ask for your papers – and "I am a mere table of contents" (Pierce).

It's a realist's mystery; drawing back the curtain, the poet is suddenly taken with the patterns, social readings and movement of cloth, that the eye goes into the fabric and not what it was hiding. And so she puns, "It's curtains" for you. Or some other kind of hanging.

The drama of markings on the page (as compared to the stage) is a slow, traceable drama, but with its own twitchings and flourishes. That table of contents draws the poet in towards what she perceives as souls, though "Every mortal has a non-communicating material self – a waistcoat or embroidered doublet folded up, pressed down, re-folded to fit snugly inside. Incommunicado." Which is the mysterious margin of another secret scape that words - even when scribbled and photographed - refuse to let cartographers image.

At the centre of The Midnight is a long two-part essay, a prose memoir/fiction of small pieces of literary information positioned along with memories – marked on paper – of Howe's life and particularly her mother, Mary Manning, who apparently wrote a novel (Lovely People) which begins with the line:

In tracing the relations between materials, people, marks and exclusions, a possibility opens up just as it becomes secret again in a disclosure of that "non-communicating material self".

It's a prose technique and form of argument which is impelled by pieces of autobiography. (Howe remembering how in a childhood production of A Midsummer Night's Dream, Oberon became O'Brien!). The appearance of references and crucially cross-references to Michael Drayton – map, fairies, the Genius of place – seem too briskly efficient, though; the relations between the documents in The Midnight tend to go slack – there is not the passion of My Emily Dickinson, despite the small details of memoir and possession. It can become a choking efficiency – of a kind which Susan Schultz identifies in her 1994 'Exaggerated History' review of The Birth-Mark and The Non-Conformist's Manual. But then the force of that book, or of the three books collected as The Europe of Trusts, is also about how "we are Language Lost // in language" – in The Midnight too much has been found.

The central prose essay (which is called 'Scare Quotes') is hemmed with three short sequences of poetry, 'Bed Hangings' in two parts, and then 'Kidnapped'. These are all in short sections of compacted lines, without the use of differing vertical and horizontal spacings, brackets, capitals or multi-voicings of other Howe poetry. These poems just hang there, and, curtaining round, these seem like the stronger part of the book.

Wildness and assertion, which are two distinct elements of Susan Howe's style; "Thinking is willing" – weave, tree, cutting as a counterforce. A poem is "the impossibility of plainness rendered in plainest form". And, a lot of the time, so goes Susan Howe's rhetoric, that could be silence.