Autumn 1974 Essex University, the year after Ted Berrigan had gone back to the USA, sitting in a class on American Poetry. Charlie Ingham writing an Aram Saroyan poem on the board (which poem I don't recall but I know it came from All Stars edited by Tom Clark). In the previous year Ted had lent me the book and Charlie and I had loved it. Which poem was it Charlie copied? Was it eatc.? Or nnausea? I'm chuckling in amusement; some others too, smiling, others grim faced – baffled. Someone claims the chalk and draws a rectangle – in the rectangle he adds chalk splats and splodges. Foolishly I enquire, "What's that?" "Bullshit," comes the answer.

The poems from All Stars are called "Electric Poems". This, mostly because, perhaps, they were composed with an electric typewriter and the writer could now arrange words in another (different) mechanical order from pre-electric variety. Stick your finger on a letter/symbol/number and it horizontalises from border to border (and with this book, off the end of the right hand page into another world – black smudges to be found on the recto page ends). There are four single lined horizontal double-page poems – plus a double blank page poem!

Having used the horizontal the writer can also use the vertical. The poems 22 and 23 begin and end off the page, top to bottom and bottom to top. One poem can be said to run into another but we cannot say they form one poem because that would make it a long poem and not a minimal poem unless, of course, we say it has a very minimal content! An earlier horizontal number poem, 1 all the way to 20 (commas after each number, fullstop after the final 20) has a left hand and a right hand margin indicating the use of a non electric machine.

This is not to say that vertical and horizontal vectors didn't exist before to give poetic form; Williams and Zukofsky for example – but now their operation is made easier and straighter. Another advantage is that with the electric typewriter words can now more easily be dislocated, page 156 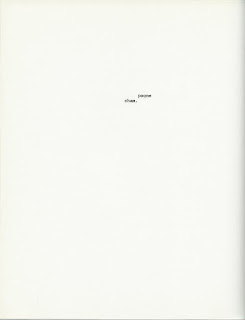 therefore meaning/s are also dislocated (note the use of fullstop).

There is then a lot of visual in the minimal of Aram Saroyan's work. There is a lot of sound also. But the particular use of the visual and the sonic and their reference points were at this stage innovative.

I think I first came across Saroyan's work – like the work of many others I came to appreciate early on (Coolidge, Berrigan, Ceravolo) – in The Paris Review, the poetry again edited by Tom Clark. In one issue I recall Berrigan, Saroyan and McNaughton interviewing Jack Kerouac. Saroyan was consistently published by Tom Clark.

On page 85 of the Complete Minimal Poems Berrigan appears,

What on earth could this indicate other than Ted could not ever stop talking, usually fuelled by superior grade amphetamine.

Layout (the visual) in minimal order is crucial. What can be done with the so little? Saroyan's eye connected to other neural and synaptic phenomenological perceptions produces a fecund array. In these examples he connects to a line of concrete (poetry) exploration – pattern, lettering (font size and style) and shape 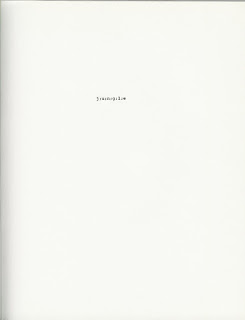 Here we have to work our way through the tropical growth of semi-colons. (Perhaps even the over-cluttered mind of Jung but I doubt it. Speculative readings are too over-rife in current writing leading us off into cow-shit pats.)

Perhaps we see some e.e. cummings here (there must be) but cummings' work is more narrative and picturesque based – whereas much of Saroyan's is perceptually based – of the now, of the instant (that Olson thing but not quite), that moment identified by Merleau-Ponty when Matisse's paint brush touches the canvas and meaning hits. If we take the instant and link it to the typewriter then we can also see connections to the work not only of Olson (plus compositor) but of Larry Eigner,

This would seem to be a capturing of the experience of the moment. Here the nakedly visual and the sonically minimal. The rattle of the typed spaced letters on the field of the page. Taking in the visual whole of an Eigner poem is to witness its flow (tidal) and movement shape.

Thus the word tiny for Saroyan can occupy the whole of page 144 (incidentally the page number is absent emphasising how large tiny actually is) where on page 14 you is disjunctive.

Disjuncture, dislocation and disruption are primal in this work in order that we gain an insight into the making (the putting together) of things – words and/or related perception – what the words may refer to, signify, indicate – or indeed their function.

The typewriter is obviously not handwriting (our first call?) but Saroyan turns to handwriting in the final poems in this collection – and again there are numbers (as words – time passing, moments fading / accruing). There's only so much you can do with a typewriter I think before the writer returns to the visual calligraphic of Apollinaire. Look at the work of Robert Grenier, an Eigner fan, in rhymms, handwritten work completed with what looks like one of those biros with four different colours, a bargain from the pound shop.

Saroyan's work is vitally pre the word processor and his handwriting like the seemingly obsolescent typewriter is accurate and neat – legible.

But also, of late, the typewriter has made a reappearance in the work of Sean Bonney (his Baudelaire in English) who has hammered word over word and letter over letter in his translations. For the monoglot reader these renditions must sound like the original gobble-de-gook. They certainly have the feel of being lost in a foreign city where one can't read or understand the language. Somehow this particular city is not too strange as we are city-familiar from a number of other sources. Bonney's work becomes visually attractive and alluring in its randomised and non-random spatterings.

Saroyan's exploration of the typewriter, unlike Bonney's, is clear and clean (if the message is sometimes for this reader obfuscating and riddled – p. 225 eights – p. 247 hammer & mile – again this is part of their charm). Indeed references to the typewriter occur – a much more lonely implement than the humming computer – preferably a portable rather than the prototype heavily built electric to while away creative impulse.

traffic
an airplane
the typewriter
(p. 136)

Sat at the typewriter waiting to begin, the writer encounters the immediate (unwritten) visual and sonic – and if nothing of note occurs then there is always the imagination or indeed the veritable machine to tinker on – tinker-toy-dream (p. 146), My orchestra / is / ready. (p. 132), TWO SENTENCES / 1. I'm trying to write a poem. / 2. The broom is in the corner. (p. 50). This spacio-temporal moment is always occupied but not always present to a Heideggerean being – these background moments are made present in the poem when they are called to attention and become foregrounded.

she made it a
noise
entering the room (p. 1)


sitting here
my hand cold on the typewriter
flicking the corner of the paper. (p.6)


from the window is a lake
and silent cars are given the noise of flies dying in the heat (p. 47)

A complexity of combinings riddles Raworth's oeuvres compacting the essential triad of sight/sound and perception creating a black hole of the imagination – a vertiginous depth charge in some poems.

Raworth's take on the now is included in the ongoing layers of the poem whereas for Saroyan it is sometimes the totalising content. Saroyan would have – the noises of the garden amongst the noises of the room (p. 14) and the beautiful

walking in the street a car turning in the room ticking
(p. 12)

In fact flicking through Raworth's Collected I note many similar interests between him and Saroyan. In these sixties and seventies poems they seem to be having similar insights but in vastly different scales.

Ticking (clocks – noise calling attention to itself) and time passing frequent these minimal scapes. Quick wittedness abounds in puns, dislodgements, patterns and misspellings. There's always a chuckle and a smile over the page.

Finally, Saroyan loves the dot, whether it's the tittle, the anunaasika, or the anusvaara. I presume in his poem The Boxing Match (p. 149) it's the anunaasika (the anusvaara being illegal). Here we have a regular array of eleven by eight dots – unfortunately a one-sided fight which doesn't end with a knockout dot.