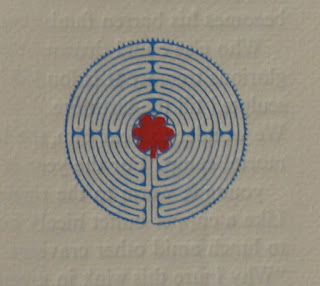 Reading this poem is a very strange experience. It's typeset large and fervent, each serif planting its own tiny flag of occupation. The size of the lettering means that the smallest kink in the kerning and lining is obvious, and there is something faintly seasick about the way the text travels. The words themselves are like English translated out of itself and then back ten times, like the lyrics of a very familiar song sung in Portuguese or one's own name seen in a mirror. Someone speaks in the poem, saying something made out of nothing but syntax and words, and we are set afloat by language that is not built for understanding.

It is light and warm inside the poem, and it smells of roast potatoes and wood and the sounds of people talking in the background. The poet likes words like "sequela" and "canticle" and "scansion" but the poem is best when it is not talking this way -- when it is talking of roads and birds, houses and the sea.

My favourite lines are:

The kite flew highly, pleurisy, &
dark dough. & the passageway is
another earth, double handle and
ratchet, to the churning warmth.

I am desperately in love with the ampersand at the beginning of the sentence. I always feel a minute zing of rebellion when I begin a sentence with And, which I do often, and ampersands are like typographical sugar roses -- the decoration that is edible.

The type on the first page is pressed twice as firmly as the rest -- its reverse stands in a faint, nubbly block on the cover. The paper, cream Ingres, is guillotined on every side and there is a single tiny bump to the spine, otherwise what the booksellers call fine. And on the last two pages, my first glimpse of the watermark on the paper -- a crowned lion rampant, holding a little sabre aloft. He looks braced and a little astonished, as though he's been caught sleeping by an assassin. Although his tail is rather nobly and particularly curved for that, perhaps. 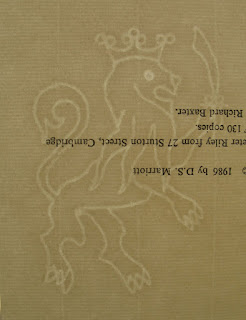