A note by Laura Steele 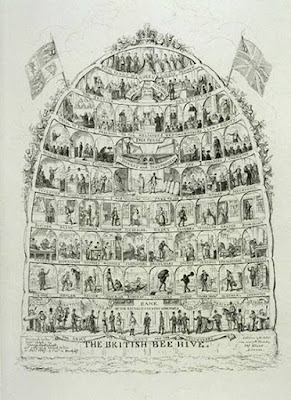 George Cruikshank, 'The British Beehive' (1867) - click here for a larger image you can read

1.
[links refer to reliably edited online texts]
It was John Lyly who came up with the phrase "busie as a bee" in Euphues and his England (1580); bees literary and actual swarmed through the seventeenth century, associated with commonwealth, exploration, lips so red they are bee-stung, and, economically, a series of bee-keeping inventions (new bee-boxes etc) which gave the idea of a hive as a generator of national wealth an actual and growing basis. To take one poem from the century's middle, John Cleveland's 'FUSCURA, or the Bee Errant' (1657): the errant bee mistakes the lover's object as a range of innuendo-scented flowers, supping from her hand and moving on, presumably the poem's couplets being the cellular confectionery produc'd, while Cleveland also associates the adventurous bee with Columbus, the female body as the globe, a figure found throughout this period, most memorably in The Comedy of Errors (early 1590s) - "Where stood Belgia, the Netherlands?" - "Oh, sir, I did not look so low."

By the early eighteenth century, it seems that all these bee associations were so bowzily busy that neither Mandeville (in his 'THE Grumbling Hive: OR, KNAVES Turn'd HONEST' (1705, published with 'Fable of the Bees' essay, 1714) or John Gay in his response, 'The Degenerate Bees' (Fable X of the second series of Fables, published posthumously 1733), use bees in any metaphorical detail at all. The Mandeville poem is remarkable for a lack of them. He simply assures us that

These Insects lived like Men, and all
Our Actions they perform'd in small:

then goes on to describe a human society with the word "Bee" inserted instead of "Man". The Hive is a form of lyrical scaling. The bees have a King, errant bees are hung in public, they have an international economy of medical supplies. In fact, the only metaphor applied at length comes in the concluding Moral, and it is about grapes:

Do we not owe the Growth of Wine
To the dry, crooked, shabby Vine?
Which, whist its shutes neglected stood,
Choak'd other Plants, and ran to Wood;
But blest us with his Noble Fruit;
As soon as it was tied, and cut:
So Vice is beneficial found,
When it's by Justice lopt and bound

Then the poem concludes by saying that, in fact, as luxury, vanity and vice turn the Wheel of our economy, we live in a Golden Age - for honey? - no, the bees are taken for granted, it's back to Jupiter's spreading tree:

A Golden Age, must be as free,
For Acorns, as for Honesty.

Mandeville's particular doggerel rhythms often shuttle half way across a line, stop, then shuttle on to the same point on the next line, an industrious movement, so perhaps the eye is a bee on Mandeville's pollen-paths.

Mandeville is quoted with particular approval within broadly social democratic tendencies - economists (Keynes in particular, marshalled against saving in General Theory), politicians and public policy people - because, firstly, he articulates a rejection of earnest, good-hearted but wrong-headed strivings for "eutopia" and moral purity (though the bit about "wild democracy" isn't so popular) which the pragmatism of office also rejects: we cannot, the necessary saw goes, remake the hive's structure by will, that is "a vain / Eutopia seated in the Brain." (Eutopia because with force it can be created; opponents of the EU have not been slow to pick up on this line, however). Change and pressure occur anyway; regulation is ours to do.

Writers such as John Gay and, the exemplary figure I choose here, Rousseau, reacted against the substance of Mandevillian perspective, Rousseau seeking to historicize the hive (locating it as urban), and John Gay (in 'The Degenerate Bees') praising Swift thus:

A stubborn bee, among the swarm,
With honest indignation warm,
Thus from his cell with zeal replied:
'I slight thy frowns, and hate thy pride.

It adopts Mandeville's use of the word "honest", but connects it to a stouter word, stubborn - Whigs in power, Swift would go on writing, whatever his position. In words, a not hopeless atopia, perhaps. All the stubborn bee can do is express, but that in this Aesopian politics is enough:

He spoke; and from his cell dismissed,
Was insolently scoffed and hissed.
With him a friend or two resigned,
Disdaining the degenerate kind.

To resign is the "honest" act; but "a friend or two" is not enough, in utopian style, to "swarm" off to form a new community (though perhaps a smug coterie): and as to whether their hope to change the swarm they reject but are in can bear sweets, then this, if anywhere, lies, as with Rousseau's view, in Gay's historicizing of the hive's corrupt state as "for a time". These positions, the natural and the historical, lock into place.

Gay gives us another bee moment which recalls the sexual innuendo side of things. We know there's going to be a bee in The Beggar's Opera because the Beggar says so in his prologue: "I have introduced the Similes that are in all your celebrated Operas: The Swallow, the Moth, the Bee, the Ship, the Flower, etc." The bee arrives when Macheath and Polly are reassuring each other that they have been faithful. Macheath sings:

My Heart was so free,
It rov'd like the Bee,
'Till Polly my Passion requited;
I sipt each Flower,
I chang'd ev'ry Hour,
But here ev'ry Flower's united.

You are all pollen to me. And as for other bee subjectivities in Addison, Pope, Arbuthnot, Swift, and the wider ideological combs here, then buzz off and stick your nose in yourself.