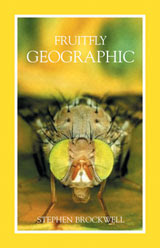 Stephen Brockwell and rob mclennan, Ottawa poets, came to read in the UK last year, which is how this book got into the "Intercapillary Space" reviewing machine. As it happens, I've also read Brockwell's previous book Cometology, as I read anything to do with comets; a passing reference to a comet does not and will not escape my radar, which makes my radar very unlike most actual radar systems.

Like the earlier one, this is a book of low-pressure, slightly quizzical, prosy lyrics. This book, however, has a cover that makes it look like National Geographic. If the book was also called 'National Geographic' and was slipped into magazine racks then things might get really interesting, and possibly libellous. So. In this book, there are a few ideas from science and maths; several mentions of a father; a touristic look-they-have-street-coffee-machines poem about Japan, 'Nagoya'; a poem which is possibly about baseball which keeps interrupting itself in two different tones; and offices.

I think most of the poems could be cut down into sparer forms; possibly some kind of Marianne Mooresque syllabic jackets would fit Brockwell well, I think, from which the publicity of the ode and the obvious interest in the structurings of voice could spark. But reading the poems in order to cut them down in my mind was quite fun. Having said that, the poems are already quite taught, compared to how this kind of thing can go: but I want the stakes to be raised. Brockwell is strong on flowers. I wish there were more poems like this one, though there aren't:

the fire bulb
of the tiger lily.

The black
fleck on the petal
names the species.

Brockwell also goes back to the diagrammatic as he did in Cometology, though I think these poems – as with most of the book – are possibilities lost; too much pre-thought out rather than thinking as poetry, too few up close views of thought's wrinkled strokes.