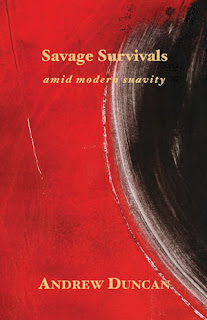 Since leaving full-time teaching in the summer of 2007 I have had more than my fair share of bizarre and beautiful dreams. It goes like this: I wake up at 5.15 a.m. (the time I used to get up); I realise I don't have to get up; I go back to sleep for an hour or so. It is in that time that a troupe of characters and circumstances are collaged onto inappropriate settings with no regard for probability or genre. But the lighting is expertly done and the soundtrack superb. I recognise it all even though I'm experiencing it for the first time.

Reading Andrew Duncan's Savage Survivals amid Modern Suavity is probably best approached later in the day, but I find the experience has much in common with some of those dreams. So what's it like then? Well, it may be Andrew Duncan's best book so far. There's an air of celebration about its language: nothing of the po-faced, dense or exclusive. Many of the surfaces glisten with wit, as do some of the underlying notions, such as the transposition of an ancient Chinese tale into contemporary Scotland, with the help of "some martial arts magazines". Duncan makes the most of this opportunity to take a wry look at aspects of Pound's Cantos, whilst at the same time adopting the mode for his own purposes. There is a certain amount of scientific terminology, which also helps to lever the poetry out of expected settings. Meterorites, for example, do not have the exciting but slightly cozy pantomime costumes of 'shooting stars': instead they encase chondrule insets – and the reader is invited to consider aspects of planet-formation theory instead of just bobbing up and down on a li-lo at the back of her/his mind. There is even a hint of the author risking a foray into the countryside and wobbling on a hummock. Throughout the book, however, attention to the political and the ethical runs like a high-tensile mat - threads of iron - 'the black dot of ethical focus'. And all of this becomes verbal music of a very high level indeed: varied, inviting, deliquescent, delinquent, grinding to a halt, singing. You want to speak the lines out loud so as to have them right in your mouth.

Genesis comes right at the end. The title is 'The Twelve Days of Christmas' but there are no adverts for religious fundamentalists, wide-screen TVs or chilled tarts. Duncan refers to a legend in which the twelve days of Christmas were seen as a period of chaotic shapelessness. Forms dissolve and the whole universe must be recomposed by beings with the gift of music. Yes, it's quite an ambitious book. But then Duncan is an ambitious poet with a positively Shelleyan commitment to the art.

There's a very powerful onward drive, too, which comes from the association of change and creation in art with change and creation out there in the world. Perception, imagination, systems, social habits – they are all as they are because we have our eyes tightly closed and keep repeating under our breath this is how things are. The poetry keeps saying that maybe we should stop doing this, for a change.

We could start by looking. Perhaps from the window of an aeroplane. (And the book is full of contexts and stances which seek to be situated just beyond familiar positions).

at the bottom of this shaft
I would tread on the straws
on a tussock that sinks in and bends
as I counter-swerve left and swerve right
a kind of capillary bounce exper
imental quaking of my pelvis to recover
straight stance. on a nod. slip shod.
toes clenching and fingertips waving
triplash arpeggio of vertebral cogs.


('Crossing the Border Hills in an Aeroplane')

Anyone who has done any tussock hopping will relish the physicality of this enactment in language. (And anyone who has read any R.F. Langley will do a double-take at the line 'straight stance. on a nod. slip shod.').

But registering and evoking physical sensations is not what this poetry is about. So the next stage is superimposing knowledge on sense impressions. Not just knowledge of physical processes:

thing making hills the hills can't
be taken away from


('Crossing the Border Hills in an Aeroplane')

But also knowledge that impinges more directly on human beings:

...900 families own four-fifths of Scotland,
You can't see lordship on this camera
and tests suggest you can't touch it either
It's something we all agree to
or else disagree

Learning a map of blocks on motion
through the maze of overlapping contradictions
to find a space your own: less than zero
or in over your head

The losers found their loss in the rough grounds
(Ronnie said)
denying what denies them
as if the whole emptiness
from mountain to shore
were a container for melancholy, like a fruit for juice

This seems to me magnificent. In Duncan it's not just psychosis which could be a product of alienation, marginalisation, injustice, absence of status, privatisation of the means for self-regard: general unhappiness wells up in the same sites and makes the world the dismal colour it is from so many million perspectives.

From some perspectives, however, the whole thing's hunky dory:

A favour network of courts, bars, and TV stations
builds a wordless consensus

And the machinery of control is imaged, more technically, later on in the book as:

Actually, this last poem crops up in an interesting interview Andrew Duncan gave to Signals magazine in 2006 in which he makes it clear that this poem is more autobiographical than many and in fact concerns the experience of being a younger brother. He talks about bits of reaction and behaviour copying themselves repeatedly until no room is left for alternatives. This process, he suggests, may eventually create a person's (a writer's) style. He says a great deal of interest to readers of Savage Survivals, including observations on recent influences and also on the processes of writing:

I can't theorise about metre. When I look at a line, I unconsciously scan it to see if it's a good line. I look at 20 parametres at once. I'm not theorising because I'm thinking of hundreds of alternatives to fix the problems...It's like putting an object on a computer screen and using CAD to swivel it around and see it from every direction.

I'm sure that will ring true to many poets. It is also why Duncan's poetry does not lead to a sense of surfeit: the linguistic surface is as varied as the subject matter and the music renews itself in constant transformations.

I wonder if anyone has read as much British poetry (and not just British) of the past hundred years as Andrew Duncan. His thinking about a good deal of it has been made available over the years through the pages of Angel Exhaust, his critical books (notably The Failure of Conservatism in Modern British Poetry, Salt, 2003), and his website.

I also wonder if his high profile as a critic and commentator in the world of innovative poetry in English over the years has slightly overshadowed his achievements as a poet. Savage Survivals amid Modern Suavity will help to redress the balance. Here's another taster; one of the chunks your grandchildren will be reading in the Fulmar Book of English Poetry (there won't be any penguins).

The notes will probably set the scene: 'back at the very beginning of the 21st century when they still entertained such antediluvian concepts as 'east and west', and 'religion', Andrew Duncan was one of the poets exploring ways to break down barriers between different languages, different peoples, and seeking to distinguish between original utterance and dead poetry.' (You will also notice that unlikely Nottingham fashionista Duncan shows a keen eye for some specialised gear I can't track down in my Littlewoods catalogue).

I'd just taken my Giro to the post office
That day I slaked my thirst
In a way I never will forget
The eight heroes of Liang Shan Po just walked up to the rail
And struck Bar Attitude Number 4 –
I didn't know that then...

They were carrying lost WS Graham books and original Elmore
James acetates
- casual like. That's when I said to myself,
these guys are no on the Minimum Wage,
Any cooler, and your joints seize up.
Hey Rodolfo
I'll have what they're having
I went to the games console just to practise standing, a bit.
I walked up and I stared at them real hard.
Is it true you're the lads killed Ni Erh?

We were expecting you, said Lu Ta.

I hope a lot of people buy and relish this book. It's generous and funky. It's witty, politically alert, big-souled and microcosmic ... and here come the last lines of the last poem:

...heaving surfaces of shapes that change
at every instant, a bell of air
very quietly teeming
with a thousand voices at once


('The Twelve Days of Christmas' XII)