The Sounds of the Pines:

I prefer the live versions. The performance of the search for
the soul

The scratches in this
recording
are due to a perfect technique.

What 'recording' does the word "this" in these lines refer us to? Judith McCulloh, in her thesis entitled "In the Pines": The Melodic-Textual Identity of an American Lyric Folksong Cluster, records 160 different permutations of In The Pines. Published in 1970, the topic of her thesis, "Where Did You Sleep Last Night," also known as "In the Pines" and "Black Girl," is a traditional American folk song that dates back to at least the 1870s. The identity of the song's author is unknown, and goes someway to explaining the phrase 'no one' which occurs throughout the poem. Although the song has been recorded by dozens of artists in numerous genres, the first printed version of the song, compiled by Cecil Sharp, appeared in 1917, and comprised just four lines and a melody. A version of these confrontational and accusatory lines can be heard in the Lead Belly 1944 version of the song; which, and not incidentally, is the version which bought the song to the American white audiences and granted the song popular acclaim.

Black girl, black girl
Don’t lie to me
Tell me where did you sleep last night
In the pines, In the pines
Where the sun never shines
I will shiver the whole night through

Moving back into the present, I came to focus my paper on this final section of the poem through listening to a recording on Penn Sound, of Alice Notley reading In The Pines which you heard at the start of the paper, at the Kelly Writers House on November 6th 2006. This recorded recording, had recorded the information that the title of the poem "In the Pines", referenced another recording, that of Lead Belly's 'In The Pines', which as I have already discussed is only one of more than 160 different recordings of the same 'song'. Considering these levels of remediation (to borrow a term from David Bolter and Richard Grusin) where one medium is represented in another, the poem started questioning itself as to where 'the scratches' are to be located, which the poem states are 'in this recording'. What recording? Further more, hearing the line 'I prefer the live versions. The performance of the search for the soul' mediated through a two year old recorded performance of the line, drew attention to the necessity of approaching the whole poem as a sounded inheritance; even if the material of that inheritance was anything but sound. The song 'In the pines' is incredibly violent, and ends with the husband, who has been berating his wife throughout the song, being decapitated by a steam train, fuelled no doubt, by wood from the surrounding pine forest.

To make things more complicated this last section of In the Pines also infuses linguistic and audible material from two other songs. Firstly, 'Blind Willie McTell' which referring to another songster, and written by Bob Dylan, contains the haunting refrain: "And I know one thing no one can sing the blues like Blind Willie Mctell." And secondly, a song written in 1720, entitled, 'The Gypsy Laddie', also known as 'Black Jack Davy'. All these song-texts are remediated and intertextually weaved throughout the recording of this poem into the book form, in a heteroclite network of expansive textual, aural and bodily connections, some of the sounds of which I will now attempt to let play out; however briefly.

Starting with some lines half way down page 59 that read:

It is important to note that in this line, 'eyes' are refigured as pine needles hanging from the boughs of the pine trees, and inversely, that the pine needles (what you would normally expect to find hanging from the pines) are refigured as the 'poems' dark eyes'. It is not too much of an imaginative leap, considering the overt presence of the musical source materials, to connect the idea of pine needles to the "needle" used for the playback of old gramophone records; the kind that Lead Belly would have recorded his 1944 version of the song on.

Exploring this metaphorical connection for a moment, the 'needle' on a turntable or phonograph, is a crucial part of the audio machinery, as it is the one part of the system that actually contacts the recorded disc and transfers its vibrations to the rest of the system, the speakers and such like. Seen, or perhaps heard, in this way, 'the pine needles' or the 'poems' dark eyes' follow the contours of the recorded groove: "riding the exactitudes of pitch the tune, in words alone" p.57. We as readers are implicated in this process too. The final section of the poem provides a spatial, technological as well as a historical conception of sound as well as proposing strategies for intervening within the traditions of history's song. The 'recorded groove' that the poem rides is the noise of transmitted history, the emergent and the recorded, the aural layering of ghostly voices, 'live versions' sounded out and seen through the embodied text, sounded out in performance.

The lines which immediately follow the image of the 'poem's dark eyes' explore this further, they read:

It's such an old function I've forgotten everything that I know. Except how to do it again. He still knew how as he lay, mostly blind, dying. He just didn't do it anymore. He was it.

Here the poem reconfigures the 'In The Pines' accusatory imperative lyric of "don't lie to me" as an embodied past tense version of the verb "to lie" in the words "he lay". In fact the whole last section of the poem puns on the double meaning of the signifier "lie". Through an audible détournement of the blues song, ethical and historical concerns regarding the inheritance of a tradition that 'lies' are cleverly translated into spatial metaphor. Consider these lines:

There's an enormous pine beneath which she lies. Momma in the pines and of all the pines, this one above, with some of its needles gone, yellow is the most beautiful. It can't stand long, can it?

By lying beneath the pines, the voice in the poem, who attests to not doing anything else than taking care of the pines where we sleep (p.58) becomes the observed object of the 'poems' dark eyes', which latterly are described as hanging from the pine trees' boughs. In this way the poem engages in a conversation with itself: literally seeing itself both as the manifestation of a tradition, an active agent in maintaining that tradition, while at the same time strategically interfering with it, and because all needles wear out, eventually becoming part of it.

The following lines should be seen in this way too:

All the meanings in the word ring should be married to each other. If one were to look at a horizontal cross section, a cut through of the trunk of a tree, observing the trees annual growth rings, a technique called dendrochronology, the patterning would not be dissimilar to the concentric circles found on the surface of gramophone records; the cross-section of the pine tree exposes us to the grain of the voice, and the pine needles that grow, offer us a way to hear it. However, within this metaphor of the pine tree as record collection (record stacked on top of record) it is important to note that the grain of history does not just expand inwards and outwards, it also expands upwards, and by shedding its pine needles, also descends downwards. By using a spectrogram to spatially arrange the voice of the poem, plotting time against amplitude, one could make out, perhaps just for fun, the shape of the pine trees in the abstract images of the spectrogram. 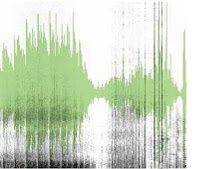 The upward and downward peeks of the spectrogram are mirrored in the spatial relations of the text. The first example of this that can be pointed to is the heavy frequency of the vowel 'O' within the poem. For instance the following lines moves through multiple soundings of the phoneme 'O'.

And I know one thing. No one. Is the Poet. I am.
She just did what she had to do.
Who else can do this? No one. Anyone who cares to, and the eyes above, where I have been approve. (bold my emphasis)

Here the concentric rings of the pine tree are projected across the surface of the text providing visual as well as audible markers of process.

The second such example is on page 60 where the folk song Black Jack Davy is remediated into the form and content of two stacked verses: one on top of the other, creating a visual hierarchy.


Furthermore, as intimated, this last section of "In the Pines" interweaves three variations resonant in the word "recording" and by doing so creates a multi dimensional account of history.

In conclusion, and as a final note to this paper, that may open up possible discussion, but touches on an area that exceeds this paper's possibilities, there seems to be a rewriting going on here, of Walter Benjamin's Angel Of History'.

Who needs angels? If they speak, I'm not even going to listen.

By page 60 the angels have been incorporated into the tree, spreading their wings and flying up from the tree, seemingly escaping the dialectical, backwards and forwards bind, that had left Benjamin's Angel caught in the storm Blowing from Paradise unable to close its wings, watching helplessly from a distance the shards of history rise ever skyward. By contrast, In The Pines presents a history of complete movement; a history that is an audience to itself; a history of the song, a song that is ripping itself apart but also by its singing, ripping itself into renewal.

And the scratches, well, they are fraught and thankfully can be found everywhere.

Comments:
I like the concept of a spectrogram as a pine tree! Vowels are certainly more interesting to look at, as they have the highest intensity. I can comment, using the little knowledge I have, that there is actually no vowel 'o'. It's a grapheme that represents a limited range of different vowel sounds depending on the sounds around it (and is sometimes the approximant /w/ as in one). You might be better off saying something like the text explores/plays with the great range of vowel-like sounds (e.g. [u:] as in 'do') that are represented by the grapheme 'o' in English.