Lisa Samuels, The Invention of Culture 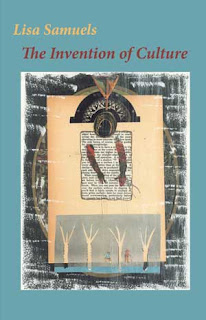 thistle wind shoots past the barbaric


These are the opening lines of "Maze: a play in the round", and from the very first word, indeed the very first syllable, we're adrift in a medium that in honour of the author I'll call "Lisa English" (LE), in contrast with Standard English (SE), the language in which we write reports, read reviews, that kind of stuff. I'm aware that this monolithic idea of a standard vehicle is wrong, but I think I can use it in this context, the same kind of way that you can still use Newtonian mechanics so long as you don't take too long over it. Also wrong is the suggestion that LE is an entirely individual invention, quite the contrary, it is just one variant of an immense communal creation - for example, that particular use of "these" in line 3 happens (for me) to recall John Wilkinson - and someone with total knowledge of modern poetry would perhaps be able to write family trees for most of LE's techniques.

Part of the fascination of LE is trying to connect it with source materials in SE, sort of playing the alienation backwards and de-alienating it. Thus:

LE: Alightened
SE: Enlightened crossed with alight, the a- prefix as in "Corinna's going a-Maying", etc.

"Maze: A Play in the Round". As often, the title is learned buffoonery, with a characteristic slight dissonance, i.e. between the occlusion of a maze and the open-air vistas suggested by a play in the round. Reading the poem, one forgets the title. You cannot easily say what any of these poems is about: LE chimes with meaning, but it does not mean things in the way that SE does. There's a lot here about arrivals and departures, and a continuous play with eyes and shooting (SE: shooting a glance at someone). You can see those motifs getting under way in the lines quoted above. At any rate the poem betrays conflicted situations - in which shots, of course, play a large part - and enacts various attempts to put the lid on them: eyes are sealed, mouths bound, bandages interact with "the finest interwoven cloth" (of a poem in a book). The poem ends up here:

all the polished antitheticals
are pent and spilled and rued

on the path of eyeishness, the lines intrude

(In my review of Samuels' Paradise for Everyone (2005) I said a lot about the formal resourcefulness of the poems, so I'm leaving that aspect on one side here.) What I do want to notice is how the polish of these closing lines as it were concentrates, anyway does not succeed in battening down, the feeling in the poem. When you first read delightedly through the 45 poems in this book, you can maybe think - I did - that Samuels' virtuosic command of her instrument, her philosophical sophistication, must be superior to the passions of mortals. But it isn't so. In "Maze", the uncomfortable "Witness", and above all the immense hostile weather-systems of "Fire skin with the cell-phone execution on" the untidy, splattered pages tell a story. But sometimes this is less obvious:

Everyone agrees and you have culture

The elect, morphemically engrossed
is beautiful, his haunch par terre
like the horsey appended to a carousel
whose figures of motion self-deceive.

'Safari,' he's telling me about it, one exquisite
fortitude after another. We purr on land
in grasses, on highways made of carpet
the pinks of funerary curiosity

Not that economy isn't the central basis of
blood terror, but the woman in the cake
knew how to get out of there fast
(he did it, he stayed right there in his doubt!)

They all smiled enormously their boundaries
lightened. After that, one might hope to be thinking.
Hyperions of crème brûlée, cities
one would heretofore have no reason to spell.

The rage in this poem is quite contained, so perhaps you wonder, immediately after reading it, if it was really there. But there's at any rate no doubt about the sarcastic judgment in "exquisite" and "beautiful". For our speaker, the single quoted word safari is sufficient to act as a sociolinguistic marker - his subject, the non-western material made into dominated leisure material and wondered at for its exotic spellings. And of course, there is no doubt about the satire directed at that sycophantic audience who suppose admiringly that "After that, one might hope to be thinking." That too sufficiently denotes a sociolinguistic, class-marked register - but satire also implies an inwardness with the satirized, you cannot really be wickedly funny about something unless you know it from within. So the poem's onslaught is to a certain extent directed against itself - it too is undeniably beautiful and exquisite: how about those "Hyperions of crème brûlée"? Samuels, some readers may feel, is troublingly at home in the Jamesian/Whartonian tea-party of this poem, works the registers of nineteenth-century gentility almost too expertly. Perhaps Samuels' enjoyment of such literary vacuities is her equivalent to the long-running post-modern obsession with kitsch (e.g. Ashbery, Koons), which continues to re-emerge transformed into the grotesque cutesiness of the gurlesque, the sublime baseness of flarf, and so on.

But I've quoted this poem for another reason, also. It's time to get back to LE and another of its basic methodologies, the consistent adoption of words that strike us as approximate, hazy, blurred, not quite on the money.

They all smiled enormously their boundaries
lightened.

The SE equivalent is something like "their (mental) horizons illuminated". But Samuels' way of putting it intrudes another SE expression, "their burdens lightened". The implication, you may think, is obvious in this case: the mental stimulation offered by the lecturer is not what the consensual audience like to imagine. Boundaries have not been pushed, new ground has not been broken: it's simply that mental limits have been made to feel more comfortably bearable.

This is submitting the processes of LE to explanation, which is not what I'm really interested in. More often the perversity of expression has a different effect:

When you say the words "horse" (or horsey) and "carousel", you don't really even need a word to explain how they are joined together. Everyone knows that the horse is on the carousel. In the most common arrangement the horse moves up and down on a vertical rod that plumbs in and out of a socket. No-one could claim that "appended to" is a particularly good way of describing this connection; on the other hand, what other word in SE would be a particularly good way? The wrong word for spatial relationships is a characteristic device of Samuels' texts. It opens out for us, if we let it, a peculiarly powerful means of proposing (without delimitedly setting down) narrative. Try this (from the unpromisingly-titled "The Meal of Your Choice"):


forward in a claustrophobic sea


you reached roundabout
that dark

angled, and the new one
rising board by board


feather talk arranged, admonishing
the back which holds you

to a rare and bracketed smile
woven outward, that's a waiting

taking all the fire
breathing in

Go with the story, and it's thrilling. What pricks us into discovering (or rather, creating) depth and background is the wrong compositions: fields and rowing don't go together, sea is not claustrophobic, you cannot reach roundabout darkness, boards are normally horizontal, weaving means going inward not outward, etc. To each of these remarks you may append: Well, not normally, you can try to save the appearances (e.g. a choppy sea is claustrophobic in a rowing boat, the boards rise when the boat pitches...), and in these demurrals the poem's work is done. There's quite a bit of this kind of "narrative" hidden away in The Invention of Culture, if you are determined to find it: "Lost and Found" convalesces within earshot of a surf-torn tropical coast, and "Increment (A Family Romance)" has you leafing through a multi-generational saga. But the appearance of "narrative" can't be taken for granted: "The Five Enslavements: A Novel in Four Parts" is much more tricksy, a play of shadows masked by comically flailing attempts at literary phrase-making.

A very curious feature of LE is its predilection for certain words - some extremely common, some less so - that (as you get acclimatized to it) gradually draw attention to themselves by coming into use just a shade more often than you can easily explain. Some of these, such as the recurrent "hands", "eyes" and "air" are indeed hard to miss: others, such as "back" and "admonish" (e.g. see the extract above) emerge only after more sustained immersion. Others that I've noticed: "skin", "saturate", "broken", "paper", "figurine", "billow", "posh", "sides", "beach", "arms", "head", "bird", "dirt", "grasses", "trees", "sullen", "mode", "ruse", "scarified", "soft".

The Invention of Culture (title) hides an ambiguity: is culture something we privately invent (as perhaps on beaches or islands or tracing paths in the air), or are we ourselves "the invention of culture"; as these endlessly intricate poems come into existence, "invented" by the building blocks of LE that I listed above? For after all culture is only invented in such unrespectable historical theories as the Atlantean one about travelling Egyptians seeding culture in the far corners of the globe, a theory that becomes momentarily prominent here in "Egyptology" and "Young and Beautiful". And the islands themselves turn out to conceal a debt to the acculturated: "The aisle is full of noisy disregard" begins a poem seamed with Shakespeare's The Tempest. Samuels' book hangs there in the ambiguity: both sides of the coin coexist already within a cultural framework in which the ambiguity becomes disputable, namely western individualism. And can that be uninvented? What you think about that probably dictates how you react to the last poem in the book:

that's that island there and I am not the day recedes
the man standing in a memory of the man standing
if I had a temple to relax in, it would be almond trees
those abeyed above our heads with mild bitterness
leaves tired having sprung in the spell
the news is over before it can be called -
it's a way of paying attention, that's the ticket
I have governed for someone's sake though has it been -
and lovely are the grasses, lovely the spell, the limbs cast upward
tellingly, his little hands climb the air, purposeful
(the youthful self he once was, lovely and externalized all nerves
and now embedded, imbued, re-tigered)
underneath the lemon tree all is forgiven
we suck until our voices ring like bells

The bells that end the book are also doubly in the book's first poem, and that "lemon" is also in the book's second poem. As for islands, grass, trees, hands, limbs, heads, they are recurrent. Does "the day recedes" recall Yeats' "the unpurged images of day recede"? "mild bitterness" - bitter almonds, bitter lemon? This poem is lazy in the irrealis: "if I had a temple to relax in" - but is this what temples are meant for? When I said irrealis I was also thinking of another title - "Beneath the valley of the present indicative" - the chiming milieu in which I'm wandering is distinctly subjunctive: Mediterranean, but subjunctive. And is this "forgiveness", however inevitable (one is tired out at the end of a long day), licit? One forgives a culture only when one has broken it. So I prefer to think of the book, not really as celebratory, not really as philosophically serene, but as arriving - without tools, but at any rate arriving - at a coalface. In the mean time, it's difficult to stop reading it.

I reviewed the earlier volume Paradise for Everyone (2005) in Stride Magazine. Shearsman have announced publication of the long poem Tomorrowland in 2009.

Three poems in The Invention of Culture first appeared in Intercapillary Space.