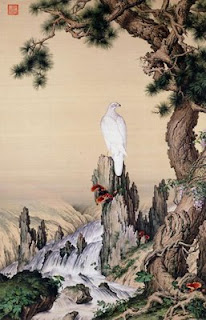 MF-B: Mulford's poems have often taken the memory of concepts to be history. Then they try to find ways out from this idealism. The result is some kind of landscape. I CHINA AM is a three part sequence which opens the new book and is its most intriguing piece. The 'land between' seems to be, in this first part of the book, a European-Chinese location on the surfaces of paintings - the book's cover shows a painting (right) by Giuseppe Castiglione, an Italian who was sent to China in 1715, becoming a favourite court painter. His Chinese name is Lang Shi'ning, known for his detailed animals and flowers. The bird is a hawk.

EH: I CHINA AM locates what at first appears to be a subsistence which interrupts the empirical purism you arrow to. Initially glimpsed 'between' (anywhere and anywhere), the pieces of the poem bring out both detail and pattern from this subsisting border gate as works encountered away from any potential nullity of place.

MF-B: Yes, up until the bit about the “potential nullity of place”, which seems a bit of an untimely splurge. After all, this is not a poetry of liberation; the resulting set of jarring ‘works’ – between lands – are both witty and occlusive.

EH: Not liberation but a dramaturgy of restitution.

MF-B: I’d start in a different place. But here’s a page from Mulford first (click to make big): 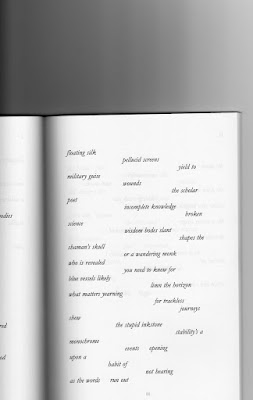 Your recombining ‘works’, tilted towards us at the speed of reading, come dangerously close to spinning back as ‘ruined perception’, and that’s all we need. It isn’t that there is some poetry which is ‘open’, which keeps myriad possibilities alive like a phantom of the market’s differentiation. Instead there is some poetry like I CHINA AM which actually turns on and back into one possibility, one ongoing connection between pieces, trying to find the condition of the connection as if naming took place when the eye tails across white space.

EH: Why a phantom of the market and not an ever-deferred wish to blow up time into all possible worlds at once?

MF-B: Because I don't think many poets do want to blow up time. Is there a poem which would remain intact in all possible worlds?