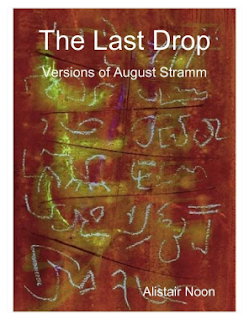 12 versions of poems by August Stramm, accompanied by an essay 'Blood, Flesh and a Packet of Tissues: Putting August Stramm into English', in which Alistair Noon notes: "Both [Stramm's] significance in the canon and his biography are summed up in a poem by Ernst Jandl, which begins: ‘he august stramm / abridged very / the german poem // him august stramm / the first world war / abridged …’ (my rough translation: the unusual syntax is a feature of the original)."