O come
all you
o come
you o come
(adorn you)


These are the first two of the ornaments in "Hook & Ornament", the final poem in Vauxhall. Here carols, celebration, eroticism, letters and even the belles and beaux of that London ambulatory coexist within a visual poem so transparent it hardly requires reading. Instead, we can linger over such details as the tongue of the bell and the characteristic variation in the length of the loop, a memory we feel on our pricked fingers, fresh from working our own adornments onto a potted spruce. But they probably use fir in LA. 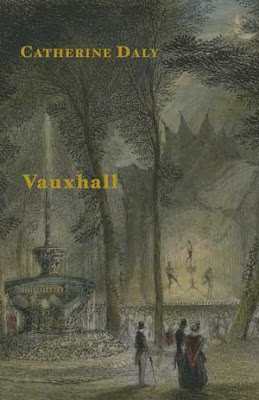 Vauxhall is an ample source of seasonal trifles. "Candy", for example, pretends to throw a bunch of sweets into the air and let them settle in a variety of patterns such as Christmas, Easter and Hallowe'en, as well as hugs and kisses. "Occasion" is one of the big words in Vauxhall, which is liberally decked with holly and has the carpets drawn back for dancing.


During this vacation, we weave splendor.
It dissipates in the commerce of occasion,
ravels stars like flowers.

But with the possible exception of "Hook & Ornament", the poems in Vauxhall don't really look as if they started out as true occasional poems. Yet there is an oblique relationship. Reading these poems, they point in several different directions, out of the book, to several missing circumstances that we happened not to attend. So we read the survey-cum-royal history of "Canada Place" and think, why Canada? Why Princess Charlotte? The provenance of the poem piques us. Why the curiously matter-of-fact topographies of "Nouns off Monterey (Sardines)" and "It Has It All", the former lighting, as it happens, plumb on the image of Robinson Jeffers' "The Purse-Seine"? (Indeed this might be a source for some of the nouns, but you can't really say because a noun isn't a quotation.) It's not that we don't expect this range of content, it's just that in Daly's other books the content is hammered into rude capacious frames, comprehensive projects. Here the poems refuse to lie down together, they still memorialize those missing circumstances, and perhaps this is actually a subtle project that only masquerades as "poems on several occasions", or maybe those are really what Daly plundered to make the book. Either way, it forced a different kind of concentration on my reading.

According to a recent anatomy of her numerous works, Daly considers Vauxhall as falling within a lyric category, in a certain way continuing from Locket (published 2004, though mostly written 1995). That's at any rate useful in deterring British readers from trying to read Vauxhall as a follow-up to the awesome DaDaDa (Salt, 2003), which is in a different workstream. But in some respects Vauxhall isn't very like Locket - it fits better with what Daly said in an interview about her work being a kind of "information processing". Vauxhall moves out to a metalyric distance. The analogies are with map, catalogue and manual, never with description; "Dance Dictionary: Directions for Bodies & Feet" will make your legs feel exhausted from ballet gestures, but it will never mention chalk, leotards, etc. And nor does Vauxhall mention holly, fir, carpets and all the other fanciful stuff I've already draped around it.

"Peace", for example, is elegant reverse engineering of lyrical ends, a semblance of the great ode produced merely by intent quotations and the simplest of fun ideas:


hull
shell peace?
a mountain of shelled peace, tossed
shelled peace does not keep
peace should be filled, not stuffed, with peace
peace is the seed

shall this peas sleep with her?
kneel in peas
kiss our lady, Peas
soft phrase of peas, rust in peas

Least like occasional poems, yet pervaded with the same idea of an obscure provenance, are the surprising diptych "The Study of Paradise" and "Heaven: An Inventory". Both are driven by the same engine, which alternates between mainly highflown lyric and mainly demotic prose (indented).

If paradise is an infinite triangle
and geometry's the mathematics of the self,
I trust
heaven harmonizes

(from "The Study of Paradise")

By the end of "Heaven: An Inventory" (it isn't an infinite inventory, though the promise of a catalogue does collapse), the two elements have infected each other quite badly.

Welcome to the next level, when form has passed away, vessel,
metaphor disintegrates, but before the fall, you can rise, in
effect, -ish.

some sort of concept for mind or heart or whatever astral plane,
I'd like to meet you on the astral plane, astral plane
somewhere not so observed as if god's a creepy voyeur

wanking to old Babylonian astronomy, ranks of angels,
the place of heroines before Brittney and the like gained their
ascendancy,
Beyond Bhuh, Bhuuah, and Swah.

Unexpectedly, Daly flourishes a new range of flat, sour tones to her palette here, set off against the enchantment of an ascent into the empyrean. Kickstarting from Jonathan Richman's yearning fantasy (see also Secret Kitty, p.41) and love and Brittney, feminism, consumerism, technology, the secular poem is now the only poem serious about religious content - that is, as serious as it's reasonable to be. Daly likes to leave sobriety to the reader, but here (as in "Hook & Ornament") I do find absorption.

Two earlier visits to Daly-land in Intercapillary Space:
To Delite and Instruct
That Locket Sound