The following essay forms the first half of 'Interior Ears', the hand out from 'I Know Something About Love', the "Intercapillary Places" launch event.

This essay uses Yinka Shonibare MBE's installation Jardin d'amour as a starting point from which to explore a general history of labyrinths, mazes, and their place in English and French garden history during the seventeenth- and eighteenth-centuries. Jardin d'amour is an indoor garden maze featuring couples in fixed attitudes which mirror exactly the composition of three famous paintings by the French rococo artist Jean-Honoré Fragonard; The pursuit (1770), The love letters (1770-1773), and The lover crowned (1770-1773) (figs. 1, 2 & 3). Sat primly on a marble pedestal or coyly shying from a lover whose outstretched hand grasps a pink rose in full bloom, these figures would be charming if it were not for the fact that they are headless and that their sumptuous eighteenth-century attire is made from 'African' batik, a cloth of Indonesian origin which Shonibare famously sources from Brixton market. Shonibare's version of the rococo questions the sincerity of the original's seemingly natural, pleasure-filled scenes, reminding us both of the manipulation needed to arrange nature into pleasing forms, and of the legacy of the violence, inflicted on the inhabitants of France's colonial possessions, which began whilst the country's aristocracy was at play. Jardin d'amour is both playful and powerful; rather than comment on it directly, it is hoped that this essay will amplify our understanding of Shonibare's piece by setting it in its eighteenth-century context. 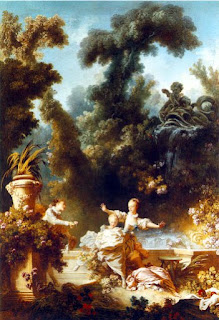 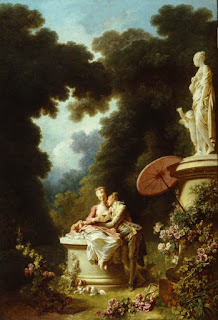 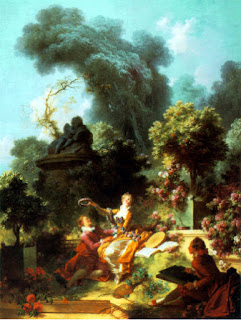 And so, to labyrinths and mazes. What is the difference between the two terms? They have often been used interchangeably but in recent years philosophers have distinguished between the labyrinth as a uni-cursal structure, a non-branching path that leads directly to a centre, and the maze as a multi-cursal structure, a branching puzzle with choices of direction.[1] Since this essay features historical examples and there have been over the years definite trends towards 'labyrinth' or 'maze', and towards uni- or multi-cursal structures, I elaborate on an example's particular name and form when it seems especially illuminating to do so.

The labyrinth has ancient origins, both as a building, and as a symbol impressed on coins, carved on walls, and figured in mosaic pavements. Though both the Egyptian and the Cretan labyrinths were multi-cursal – you could definitely lose your way in them – the symbol evolved into a uni-cursal, seven-ring spiral, in especially wide use throughout the Roman Empire. Following this classical beginning the symbol was appropriated by the Christian church and depicted on its floors and walls, which practice peaked during the medieval period, particularly in Italy and France. Historians have speculated that the Egyptian and Cretan buildings were intricate mausoleums, designed to keep marauders out, whilst the Christian symbol was a figurative path of penitence for the soul. During the mid sixteenth-century, however, there developed a new use and meaning for the labyrinth, as the fashion for garden labyrinths took off in Italy, the Netherlands, France, and England.

In England the uni-cursal spiral had not been in popular use, except for constructions known across the country as turf 'mazes', when the symbol was cut into the ground. Avidly documented by the antiquarians John Aubrey and William Stukeley, many were destroyed by industrialization. It was probably for this reason, then, that when the fashion for garden labyrinths arrived in England from the continent, these constructions gradually took on the name 'maze'. They also became multi-cursal once more. The garden maze fitted perfectly with the sixteenth- and seventeenth-century European style of laying out gardens à la française, a very formal style of dividing the garden into symmetrical, geometrically-patterned parterres, or planting beds. In this style, the garden maze might form several or all of the parterres. The jardin à la française reached its peak during the seventeenth-century with the Versailles palace gardens designed for Louis XIV between 1662 and 1687. In England, the Hampton Court Palace gardens were laid out in this style, including its famous maze, created in the 1690s by George London and Henry Wise.

Jardins à la française continued to be popular throughout Europe until about the 1750s. However in England, from the mid seventeenth-century onwards, something curious seems to have occurred in the way garden theorists conceptualised and employed mazes, a development which prefigured and perhaps helped pave the way for the picturesque or landscape garden, the style of garden which began in England in about the 1720s, and became increasingly popular until it was exported across Europe in the second half of the eighteenth-century. Beginning in the 1650s or so, the highly artificial garden maze became closely associated with the notion of a wilderness. Parliamentary forces making an inventory of Charles 1st's widow Henrietta Stuart's possessions, noted a maze and wilderness set side by side at her former Wimbledon Manor and Park residence; whilst the author Walter Harris, describing the King of Holland's palace gardens in the 1690s, used the words 'maze' and 'wilderness' interchangeably.[2] In his Tour thro' the whole island of Great Britain (1724-27), Daniel Defoe also described the Hampton Court maze as both a 'maze' and a 'wilderness'.[3] English gardeners were beginning to value more 'natural', less rigid and overtly artful garden design, and their use of the maze was crucial to this. In the grand manner of laying out gardens advocated by the authors Stephen Switzer in The nobleman, gentleman and gardener's recreation (1715), and Batty Langley in New principles of gardening (1728), mazes were often situated to the side of a broad gravel avenue which led away from the house and terminated in a fine prospect of the wider, and wilder, English countryside. The maze, or 'wilderness', away from the house but still part of the garden, seemed to be where art and nature collided. Despite knowing that the maze was planted by human hands, visitors, temporarily lost inside its leafy corridors and only partially able to ascertain its overall plan, could still imagine it brought them up close against uncharted territory, raw nature, the unknown. In imitation of the variety of nature, mazes became less symmetrical, more irregular, whilst the plants which made up the maze hedges became more mixed. And even as maze designs became ever more ambitious and intricate, as we can see from Batty Langley's plates appended to his New principles (figs. 4 & 5), they also became more meandering, more imitative both of natural forms and of a walk through the natural landscape. 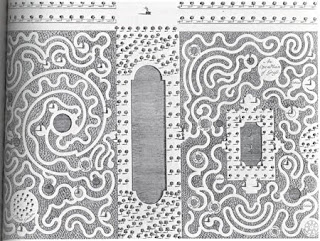 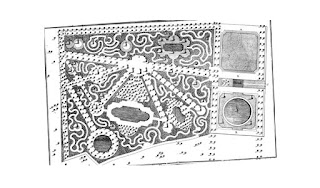 Recognizing this, Langley said of his designs that his wildernesses gave 'great Variety of Walking'.[4] It is with this remark that we glimpse the kernel of an idea, which grew to become the biggest innovation in gardening during the eighteenth-century. The picturesque, or landscape, garden flourished in England from the 1720s onwards. Its basic tenets involved featuring the 'richness and variety of natural materials', appealing to the eye 'roving across an extensive scenery and trained to attend to its every aspect, from detailed foreground through a middle distance of calculated effects to hazy distance', and finally, involving the 'imagination, memory or mind as well as the eye, perhaps by invoking historic events'.[5] Long walks through the landowner's estate, over grassy hills towards a well-placed lake or temple, became common. The picturesque garden was meant to be 'embellish'd after Nature's own rules', so as to be emotionally and aesthetically pleasing, either reminiscent of landscape paintings or suggesting itself as subject matter for them.[6] But in this 'Art [which] is best that most resembles her [nature], / Which still presides, yet never does appear', there seemed to be little place for mazes.[7] As the picturesque garden grew in popularity, so the number of mazes diminished. It was not until the Victorian period that mazes became fashionable once more.

A postscript to this history of garden labyrinths seemed too tantalizing to be left out. It is generally accepted that it was owing to the vogue for picturesque gardens in the eighteenth-century that gardening was deemed to have become an art form of comparable status to that of poetry and painting. 'Poetry, Painting and Gardening, or the Science of Landscape, will forever by men of taste be deemed Three Sisters, or The Three New Graces who dress and adorn nature', exclaimed Horace Walpole; whilst William Wordsworth declared, 'Laying out grounds, as it is called, may be considered as a liberal art, in some sort like poetry and painting; and its object, like that of all the liberal arts, is, or ought to be, to move the affections under the controul of good sense'.[8] Yet in two further eighteenth-century quotes linking the garden maze with poetry, we see the opening up of a debate which could also be applied to the criticisms often levelled against contemporary avant-garde poetry in Britain:

'[The object of a labyrinth is to provide] an intricate and difficult Labour to find out the centre, and to be (as the Vulgar commonly like it for) so intricate, as to lose one's self therein, and to meet with as great a Number of Stops therein and Disappointments as possible' – Stephen Switzer, Ichnographia Rustica (1741-2)

'In designing a garden, everything trivial or whimsical ought to be avoided. Is a labyrinth therefore to be justified? It is a mere conceit, like that of composing verses in the shape of an axe or an egg: the walks and hedges may be agreeable, but in the form of a labyrinth they serve to no end but to puzzle; a riddle is a conceit not so mean, because the solution is a proof of sagacity, which affords no aid to tracing a labyrinth' – Henry Home, Lord Kames, Elements of criticism (1795) [9]


Doob, Penelop Reed, The idea of the labyrinth from classical antiquity through the middle ages (Ithaca: Cornell University Press, 1992).

Hunt, John Dixon, The figure in the landscape: poetry, painting and gardening during the eighteenth century (Baltimore: Johns Hopkins Press, 1976).

Langley, Batty, New principles of gardening: or, the laying out and planting parterres, groves, wildernesses, labyrinths, avenues, parks, &c. after a more grand and rural manner, than has been done before (London, 1728).

Matthews, W.H., Mazes and labyrinths: a general account of their history and developments (London: Longmans, Green and Co., 1922).

Switzer, Stephen, The nobleman, gentleman and gardener's recreation, or an introduction to gardening, planting, agriculture, and the other business and pleasures of a country life (London, 1715).