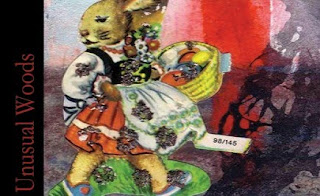 I wouldn't want to cut out and dress the rabbit on the cover of this book. Its fur has a greenish tinge, it wears a folksy dress and it carries a basket of toxic fruit, luminous sweets and anti-personnel mines. The creature is marooned on a scrap of painted grass. A numbered tag sticks out from its apron. It looks back with dead eyes. Behind it an apocalyptic landscape features a collapsed thorny cross and a blood-red rectangle dissolving back into pigment and water. It may not be Chicago. But we may be the rabbit.

My theory is that "Unusual Woods" comes from a mishearing of "unusual words", thickets that Gene Tanta has been profitably exploring, like Brer Rabbit, for years. As he points out in his interesting introduction, he was born in Timisoara, Romania in 1974 and moved to Chicago with his family at the age of ten. So the strangeness of the language in which he writes has been particularly vivid to him, and through his work, to us. The book consists of a "critical introduction" over twenty pages long, then fifty thirteen-line "ghost-sonnets".

Sometimes language is a kind of cradle. Sometimes it is a film-studio soup poured down the back of your neck for reasons which the angels & director neglected to specify. Sometimes it is a yellowing shoe-horn resprayed silver which tells you how lucky you are to tap into the following opportunities to purchase or vote or both at more or less the same time. And although it is perfectly feasible to live and die in this continuously-agitated post-amniotic fluid, there are times when a human being will need to sidestep the woffle and coercian. Where to? Gaps. The spaces between labels. The dusty drop between two skins of brick. An imagined moment in the translucent tent of the recently-punctured blister.

Anywhere to get some respite from the wall-to-wall patting on the wallet. So can you bend time and space a little? Can you find a use for the freed electrons of some linguistic units which have been prised away from their po-faced positions in the institutions? Can you empty the hat you haven't worn for years into the lap of a stranger and say – 'I used to play the clarinet - what do you make of this?'

The moon showed up at noonday

There's a cinematheque out there,

as he began batting at it with his hands.

The soup was hairier than usual.

Someone pointed to lipstick on a glass.

The waiter pushed a chair

under my rump, saying: Action.

The film started on time.

The coal miner's daughter who forgot to grin

Gene Tanta's poetry reads like documentation of the lost, just come to light after being hidden in an ammunition box buried at the site of some anonymous atrocity. It feels personal, ravaged and beautiful, hovering on the far bank of some inexplicably authentic nightmare, the first and last thoughts of a band of survivors. Distant light is intensifying but it's not clear if dawn is on its way, or some further conflagration.

Unlike some of the leading-edge poetry of recent decades, Gene Tanta's does not impersonate an explosion. There is no scattering of attention or resources. Instead, we are in a verbal landscape of aftermath and preparation. The work is careful and inclusive, each fragment of dream and vision brought back to the table for inspection and reassembly. We are invited to participate at this stage as if it mattered: as if the orchestration of meanings had to be collective because of ethical imperatives it is now too late to ignore.

Behind these poems range the ghosts of victims and the ghosts of poetic forms. None is banished. This generosity is a gift to the reader who (tired of the brash, cocky or complacent) may feel that here is a poetry adequate to our times: an art humming with political and aesthetic urgency, and with a resonance that feels at times mythic.

It is certainly reassuring to hear that everyone is keen to avoid civilian casualties.