The self-conscious ambivalence of Douglas Oliver’s cover title ‘The Diagram- -Poems’, with its torn dash, opens a speculative link between poetry and diagramming not present in the first page’s alternative title, ‘The Diagram Poems’.[1] Is there a connection between the diagrams, on the verso, and the facing poems? Is this an ekphrastic or a procedural connection? 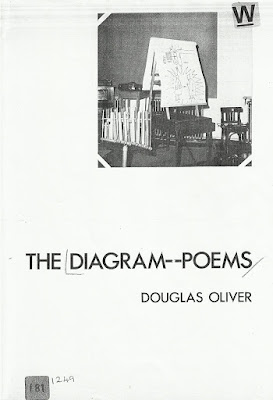 The cover photograph by Mike Russell, with its pen-drawn pictogram on a board pad, illustrates the pedagogical role of diagrams. But Oliver’s surreal set uses diagrams which ‘plot and transform movements of several groups of raiders as they make commando-style seizures of key sites’, as he prose-notes at the start. The diagrams are linked to the co-ordination of activities: they also transform the structure of these activities. Diagrams are ‘piloting devices’ for thought.[2] They are kinetic (dia-gram, the moving form); they record and inform action. But they are also metaphorical – formulating and testing hypotheses or complex information problems through iconic thought.

In Oliver’s first diagram poem ‘Team Leader’ the human co-ordinator (we presume the get-away driver) becomes bodily part of the organised geometric imaginary of car and driving process. He switches on an ‘internal driver’ which steers his human operations: the movement of ‘blood’, the ‘eyes (…) sighting’ and finger which ‘points left’, the ‘crook of elbow / in the hollow where car axles break’, and ‘his gloves mirror(ing) an inset which is / a steering wheel’ - all corporeally following the pattern of the car. In the second poem, ‘P.C.’, a diagrammatic image is redrawn three times as ‘conjurors in corridors’, ‘a vaccinated dog’ or ‘the parachute / dynamic of an old-fashioned aviator / ejecting from arrowed lines’. Oliver shows we are ‘All foreigners to these three visions’, which are ‘portals’ without which ‘none of the other movements can be complete’. These alien ‘portals’ offer intersecting configurations of the event plane; they are also undisclosed ‘visions’ depending on alien sets of perceptual inferences.

Oliver considers various procedures of the diagrammatic. Military operations and signalling (‘incurable warfare’, ‘old-fashioned aviator’, ‘the sergeant’, ‘the airman signal’). Networks of action and ‘standard procedures’ (the poem ‘Central’ maps within itself internal communications and telephone exchanges, a sonic infrastructure beyond cables). The ‘totemic’ mapping of taxonomies of fauna, as in the third poem, ‘The Fire Station’. His diagrams (redrawn in this edition by David Chaloner) map the idiosyncratic as well as the replicable – ‘Arrest’ includes a block demarcating a ‘captured funeral party’ at a bank. The human figures in action are rendered in the same sparse scientific line, caught between the utilitarian functions of tools and circuits. One stick figure in a clamp enacts ‘the span of life / so inevitable and yet adjustable’ – where the girth of space around him as ‘life’ shows the large metaphorical stretch of spatial quantification. The poem ‘Gold’ maps ‘the mid-point of this fortune’ in a figural geography ‘between two hazardous / and likely banks of dread’.

This gold – bank or cash desk – is schematised again in ‘U’, faced with a drawing of magnetic interactions, with the magnet ends marked with orienting labels ‘Law’, ‘Personal Valuables’, ‘Attack’, and ‘Escape’. The poem, if a key to the image, suggests that the magnetism represents the systemic forces of ‘banking magnates’, ‘the hierarchies of their laws’, and investments as ‘fields of force’ – as well as a form of metal hoarding which can be mapped against ‘the arrows / of acquisition, law and management’. This diagram is familiar to the plotting of magnetic fields and conductivity; but with its labels (‘mistake’, ‘one-way’) it also resembles, fleetingly, a picaresque treasure map (with its final ‘arrow pointing to an unseen cemetery’).

The final diagram offers an elegiac infograph marked ‘all directions unsure’, encompassing ‘funeral’ and ‘hearse’, but also a stranded label without a key (‘Code W-1 of the Cloaca’) and, below, an illogically centrifugal arrow sequence of traumas and trauma victims (the circle-with-arrow form usually indicates a continuous cycle; here, it appears to show unpinned causal relations between ‘2 Women 16 men’, ‘Captured Beaten The Gauntlet Tortured’, and ‘3 men killed in cold blood or allowed to die’). In the lower right quadrant of the figure, a toponym marks empty space as ‘Festival of the wild beasts’. The two semi-circles of police encircling a wood with a helicopter prompt Oliver’s ‘This diagram could again spring a picture / encircling like buttocks’. The diagram is a culturally generative form: it springs pictures ‘again’. The poem’s title ‘The Diagonal is Diagonal’ plays with the literal referential quality in a disingenuous way: the poem also envisages actual movement in the diagram (‘the rush of a diagonal’) as well as cognitive movement (‘the arrow of a bad thought’), as, earlier, Oliver asked the reader to somehow follow the pointed finger into symbolic temporal content (‘escape if you can / into the arrow of time’; ‘directed futurewards by a will / that isn’t mine’).

This skeletal stretch of relations renders, again, a life path: ‘down the swift diagonal / that slants from the cemetery in courage’. The identification of ‘points’ as spatial landmarks in a life is transformed into emotional content, writing of ‘the innocent point exactly neighbour to that other start / from which team leader became a finger pointing left’, left being ‘the old sinister direction’ which was ‘from the beginning, / the cemetery’. ‘It is my dead son who always brings me to this point / of innocence in the heart of swift cruelty’, the arrows allegorise.

The motifs of the text – escape routes (‘It’s a clear path / across the street’) and arresting forces related to the bank heist, and the repeating of funerals and cemeteries – each in some way speak to the role of diagrams in presenting routine patterns of data and action, and also the eventful break from these. The diagram exists between fixity and transformation. Even trauma, here, is a kind of diagram of lost innocence (‘all these started in the drawings from the point / neighbour to / the point at which the innocence stays clean’). We have ‘no right to borrow it, jig it into shapes, / display it like a wound’. These are the human narratives expounded from diagrams. To the speaker, the use of these diagrams is always a ‘borrow’ (‘my right is minimal’). Grief, too, is a ‘borrow’, ‘nothing / without the original movements’. The sparseness of the diagrams challenges the speaker’s models of understanding; they dramatize the ‘remote’ sense of ‘consequence’ with confused emplacement of bizarre toponyms and arrows (whether these are events in space or time is unclear). The diagrams here are a ‘handwork of the mind’ , being the griever’s mind. Loss falls back, as if on an infrastructure of mourning according with external instruction (‘it was an academic drew the arrows and the loss of hope’).

The prose note at the start anticipated the sequence as a diagrammatic heist, ‘taking over a fire station and the central telephone exchange, raids on three banks, and the final getaway’. Graphic functions can be used to arrange and incite break-out, as these imagined guerrillas escaping the financial system with the loot. But in the last poem, ‘The Diagonal is Diagonal’, there is no final high-jinks getaway. ‘It all turns so really funereal for us / as brave as that and as flawed / just a final diagram almost straight / and a heart on which the diagram is scored / besides the death of innocences we have known / and even caused a little in the scarface heart’. Diagrams are not transcendent. In Oliver they can be like scars: the continued arrival and operation of knowledge in one’s body and heart. But the pattern of grief is somehow mundanely stranding, too: ‘now the picture transforms no longer; it is the picture’.

Amy Cutler has recently launched Land Diagrams, an ongoing series of 'twinned studies' in which commissioned writers respond to the same visual encoding of landscape.