Across the shelved Atlantic groundswell
Plumbed by the sun's kingfisher rod,
We sail to locate in sea, earth and stone
The myth of a shrewd and brutal swordswoman
Who piously endowed an abbey.
Seven hours we try against wind and tide,
Tack and return, making no headway.
The north wind sticks like a gag in our teeth.


This comes from near the beginning of the title poem of Richard Murphy's first poetry collection, Sailing to an Island (1963). (An earlier version of the poem was published in 1952 when the author was only 25.)

"Plumbed by the sun's kingfisher rod" works with four images.

1. The track of the sun on the sea.
2. A penis - (compare the use of the word rod in "Seals at High Island", a wonderful poem that you can read by following the link given below).
3. A kingfisher's lateral flight over water (and its dazzling colours).
4. A fishing rod. ("Kingfisher" was a reasonably well-known brand of bamboo fly rod.)

Contrasted with the bold extravagance of this line, but just as skilful, is how the rhythm of repeated but unavailing effort gets evoked by the internal rhyme in this:


Seven hours we try against wind and tide.

The aimed-for island is Clare Island and the swordswoman Gráinne Ní Mháille (Grace O'Malley, c. 1530 - 1603). Her story interweaves with the English re-conquest of Ireland, that brutal colonization ("Spenser's colonization", we poetry fans like to call it). BTW, Gráinne met Sir Philip Sidney, as well as Elizabeth I.

Colonialism of some kind or another is a big theme of Murphy's poetry. He was himself Anglo-Irish, of wealthy Protestant Ascendancy stock, and is the first poet I've researched for whom one of the best sources is Debrett's. His family were colonial administrators. He fell out with Faber in 1984 when the new editor Craig Raine didn't want to publish (or rather, re-publish) a poem about the estate in Rhodesia that Murphy's father bought when he retired from being mayor of Colombo. According to Murphy's Poetry International page, Raine mistook a subtle exploration of colonial guilt for unreconstructed imperialism. That may be unfair to Raine. He may have been fed up with colonial perspectives, guilty or not.

"Making no headway", the author and his companions aren't able to reach Clare Island. Instead they stop at another island, Inishbofin. The poem ends with the whisky- and sea-drunk poet getting to his room and discovering, in a woozy moment of revelation, the mystery inherent in the most commonplace of objects: "here is a bed". Here on an island.

I think this is a beautifully inclusive poem, because some of the sea-intoxicated confusion is Murphy's recognition of his own muddled thinking e.g. about establishing a fishing business here in Cleggan Bay,  he, an outsider. At Inishbofin, the drink doesn't entirely dispel the courteous distance between Murphy and his island hosts. It's a theme that returns in the second poem, "The Last Galway Hooker":


One calm evening he sold me the Ave Maria.

This line draws attention to the very thing it seems to hold in reserve: that it's Murphy's money that is really the agent here. And that there's a necessary coolness about commercial transactions. Money does not always make other people happy. Murphy is not ignorant of, but is willing to accept responsibility for, the unmanning effect of this sale on the boat's former owner. 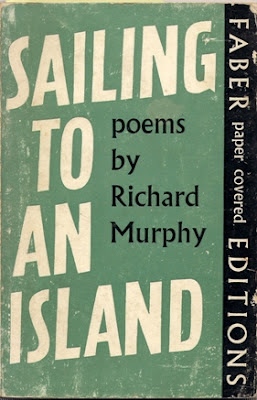 Sailing to an Island is one of those mainstream collections that are divided into themed sections. This can be a bad idea if the collection you are sub-dividing is vulnerable to a charge of slightness. The later sections of Sailing to an Island look like they're influenced by Lowell's subdivisions of Life Studies (1959). But, Murphy's poems about Roethke and Wittgenstein in apposition to e.g. Lowell's "To Delmore Schwartz", or Murphy's poem about his grandmother in apposition to e.g. Lowell's "Dunbarton" - no, these are damaging comparisons. Nearly all of what interests me about Sailing to an Island is in the three boat poems that constitute the first section.

The third of these boat poems is "The Cleggan Disaster", a title so admirably direct that it eventually claims attention, and then provokes a question: how does a modern poet get to write this? And it's a good poem; these are the opening lines.

Five boats were shooting their nets in the bay
After dark. It was cold and late October.
The hulls hissed and rolled on the sea's black hearth
In the shadow of stacks close to the island.
Rain drenched the rowers, with no drying wind.


The contrast with the "holiday fashion" of the first poem is intended and powerful. Murphy did not need to invoke a muse to underline what we can immediately feel, a different style for a bigger theme.

In a way it is a plainer style. There is a lot of story to tell, and the language has to keep its distance. At first reading it's the artistry of a short story that we appreciate, for instance the confident delay of nearly a page before Concannon, the story's seeing eye, is introduced.

Yet the language isn't so plain that, even at this early stage, we can't register, as from somewhere far off, the remote rumble of alliterative doubling: hulls/hissed, rain/rowers, drenched/drying.

I didn't really quote this opening for didactic reasons, though. I just wanted to remember, before I take Island down to Barnardo's, the marvellously wide-ranging effects of that improbable word "hearth", which deserves a Prynne-style twenty-page exposition. That, and "the shadow of stacks". (When description is like this, description is what I like best.)

The unanticipated disaster occurred soon after nightfall on 28th October 1927. 44 fishermen from in and around Cleggan (Connemara) were drowned because of a sudden storm in Cleggan Bay. It was a traumatic event for the local area; fishing in small boats almost disappeared for many years, affecting every aspect of the lives of those thinly-populated communities. The event is still remembered and commemorated (e.g. in the recent Vertigo Films documentary An Bathadh mór).

In this context Murphy's poem is not entirely the author's property; it belongs to a people. But that's the very essence of epic narrative. Murphy got to know Patrick Concannon, who survived the disaster and brought his crew home (though he was blinded in the process). And pursuing my earlier theme, this was partly because Murphy was able to put himself into a position where he was handed something now very rare, a genuinely epic subject: a poem about a people, and about a way of life, and about an event that altered it forever. A poem, also, that is centred on work, on an all-male cast of breadwinners. On the sea, among islands. And obviously the uneasy sense of appropriation is there, and is not to be ignored. But the poem was a gift as well as an appropriation. Despite all these features of atavistic epic, obvious once they're pointed out, it doesn't come over as being an exercise in a literary mode. Unobtrusively submerged within the plain story, those features manifest themselves as power, and account in part for the unusual brilliance of the narrative, that is, compared to most contemporary narrative poems, which seem to struggle with legitimacy, and end up not telling their stories very well.

So maybe his thinking wasn't so confused, after all. Because part of Murphy's intention when he started to mess with the fishing business was avowedly poetic. He wanted to forge a stronger language from his sea-experience. And he did, and all his best poems bear the mark of it.

Poetry is colonialism, too.

In career terms, it was that familiar pattern, a cable-car ascent followed by a prolonged tramp downhill. Prior to the falling-out, Murphy (b. 1927) had been an established Faber poet for twenty years, a regular Poetry Society recommendation, and a regular part of the literary scene, pal of Auden, Lowell, Roethke, Hughes, Plath, etc. Afterwards, Murphy's poetry was re-published by the Gallery Press in Ireland and by Wake Forest UP in the USA. But in 2012, I don't think any of his poetry is still obtainable in the UK - a fate that I imagine all too often befalls poets in their eighties.

A few choice poems, including "Sailing to an Island", can be read in full on the Poetry International Web.

There's also an interesting interview with Eugene O'Connell, from 2007.

Ricorso is an invaluable source of information on Murphy, as on so many other Irish writers.

The fullest commentary I've found on Murphy's work is this review of his memoir The Kick. But I can't tell you who wrote it. Text on the web, (like the text of much-copied medieval poems), is apt to shed meta-information such as the author's name unless it's secured within the text itself. I, Michael Peverett, should know better than to forget that lesson from my Langland studies...

A Galway hooker is a kind of boat, silly!

Patrick Tierney's ballad verses "The Bofin Disaster", written just after it happened in 1927, can currently be seen here. Diasasters at sea are all too frequent in the popular poetry of the time. Compare Marion Bernstein's "The East Coast Fishermen", about the terrible gale of October 1881 off the east coast of Scotland, in which more than 160 fishermen lost their lives.

From what I can gather, Patrick Concannon's blindness was temporary; perhaps a bit like photokeratitis, though the poem seems to suggest that it was the constant battering of sea-water that caused it. At any rate, there's no hint of it in this interesting memoir by the Breton Nationalist Yann Fouéré, who came to know Pat Concannon in the early 1950s, while exiled in Ireland.