Talking with Richard Makin about Dwelling 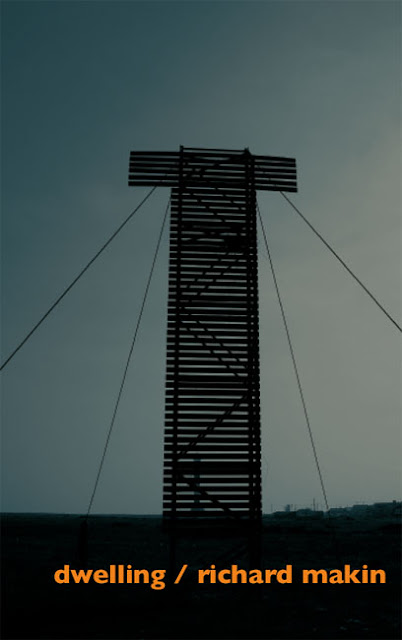 Everything is abolished. I walk out through the international exit. All the signs indicate a sidereal thing—earthshock—an incomplete mechanism in butterflies and moths. I am at home in whatever abandoned shell I can find. This zone is the much talked of buffer zone. Here, sedation triumphs over malfeasance, love too. In the first vision of this chapter he writes less provocatively. Shell tracers crisscross the sky. A probe is tracking a nerve. We are the rare doing of not. He leads me out of and into myself, away from the ghost we call things. It is dark, not light. He turns against me, attains and touches. He compasses me. Glimpsed in the darkness are creatures driven to alien forms of locomotion. (One counterfeits my death.) A projectile leaves a smoke trail. Greengold lichen or moss clings to the hull of our vessel. Likewise he cordons me about. We have triggered a chain reaction. Crew force broken glass into their mouths, between their lips. It’s a kind of game. A chemical substance is used to mark the course followed by the process. He forges a chain for me. . . . Mouths stretched taut by shafts of glass. . . . There are bodies in the water, quick and not, living or dead. Pictures rise up out of the words: I am shout. My voice is shuttered. I gather. No, my voice is gathering. I shout something white rears up out of the water, breaking the surface by the gunwale like a hand. It raises a cloud of sparks. These form a pattern in the air. My path is closed by boulders, felled trees and flytipped mattresses—looming planet at event horizon, at peripheral vision. He is a walking encyclopaedia, recently incorporated within the town museum. I am pulled to pieces.

Michael Peverett: When I discovered Work in Process [Dwelling’s predecessor] being serialized on the Great Works site, it was like a bolt from the blue, I'd never really read anything like it. But is that because I don't know the experimental prose scene at all? Is there an experimental prose scene in the UK, and are you part of it? Or should I be looking elsewhere for an artistic context, maybe something that transgresses writing and "prose"?

Richard Makin: I don’t recognize an experimental prose scene in the UK; if there is one, I can’t see it, so I suppose I’m not a part of it. I know of writers of experimental prose, of course, though how connected they are is uncertain.

MP:  I remember hearing your recent prose works described as "non-narrative fiction" (I think it was that). Is that a description you'd endorse, or at least accept? Are there ANY unhelpful ways to read Dwelling?

RM: The expression ‘non-narrative fiction’ has its uses, it tells you something, though is partial—my prose is other things, does other things. ‘Non-narrative’ perhaps overemphasizes the absence of a plot or story, as if this were the essential function of my writing, which it isn’t. It might be more pertinent to say that the material drawn from the world about and from memory is inenarrable. Notwithstanding, Dwelling does contain narrative strands, tributaries.

It would be unhelpful to read Dwelling while insisting on the presence of a conventional storyline, characterization, a sense of locations, events occurring that connect to one another, linear time etc.

MP: Dwelling is an extraordinary work on a formidable scale. This is impertinent perhaps, but I'm really intrigued about the circumstances in which someone would undertake such a quixotic venture in the conditions of UK writing today. Can you say anything about how you got to this?

MP: Are there models (inspirations, influences), however remote, that you can point to as being analogous to what you're doing in Dwelling?
RM: I feel that every detail experienced, every detail remembered, is an influence. As for writers, they all touch different nerves, and I’m reluctant to credit one before another. I began to make a list of writers who are important to me (any excuse for a list), then felt a resistance to including it here. I feel empathy with, and acknowledge the influence of, other art forms: visual art, film, music, architecture etc, which may be apparent while reading Dwelling.

MP: The scale of Dwelling is one of several features that seem to bring it into confrontation/conversation with the NOVEL, maybe the traditional 19th century novel in particular. Why do you think it turned out that way? Is there something about naturalistic novels that you're interested in, in spite of the drastic contrast with your own practice?

RM: In terms of scale, Dwelling turned out the way it did because I kept writing. I’m not sure I know what a naturalistic novel is. I think of Dwelling as a mode of realism, something concrete. The idea was to attempt to simply remake being here in words. This is impossible, of course, but I feel driven to make the attempt.

MP: While I've been reading your work and trying to frame analogies with other things I vaguely know about, one that occurs to me quite often is with the programmatic secrecy of the 30s Hermeticists - Quasimodo, Montale etc (and for me, also filtered through Gunnar Ekelöf); the other, I suppose because it's current, is with the big books of Conceptualism e.g. Kenny Goldsmith, Leevi Lehto, Emma Kay . . . Do you feel any sense of common cause with either movement?

RM: It’s an interesting question, regarding Conceptualism; Goldsmith I’ve glimpsed, and I’m interested in Nick Thurston of Information as Material. Though I wouldn’t describe Dwelling as Conceptual Writing, there are perhaps some common concerns: defamiliarization, citation, words reived (if they may ever be said to be so), re-writings, and found language. Dwelling is very much a collage of such strategies, and much else besides, including many pages of spontaneously produced passages, glimpses of numerous interweaving fictions. There is much dream-work too in the book. Can I say Dwelling involves a degree of resistance? There are numerous references to Hermes in Dwelling; I would like to think of the book as hermetic.


Beat at the water with their sticks. He says the death in each case is my own. The idea of such food is a symbol.
Jammed between their silhouettes, the other woman in the film. (Which?) The man who kills himself is uncredited. Nobody demands anything of the graphs.

Apocalypse, a small antique commode. Extract of pineal. I want things triplechecked. (You don’t do grotesque, do you?) I forgot. In the original, the exterior orbit is the sphere of the sun. The third figure shows the eruption. And yet these relations are nothing akin to fiction. As if on cue two microlights rise above the ridge.

Icy blast on the horn, a whiff of turpentine, putrescence. (Looks towards door.) A layer of varnish makes the corpses gleam. The corporation is nomadic. All this talk, years of stretched light.
Note the blue reflection, a nebula, caused.
We shall meet again at the molten core. Look elsewhere for an explanation of the phenomenon. Some are anxious about why such a futuristic story was ever accepted.
A square of shining substance rushes straight out of my mouth. Four times I obtained the correct number of raps.