Paul Brown, A Cabin in the Mountains 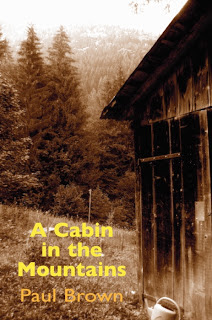 Paul Brown. The name is insistently, but faintly, familiar. The jacket explains why. Brown was a part of the scene back in the 70s and 80s, generally active in the backwash of the British Poetry Revival, London chapter. He ran important presses (Transgravity, Actual Size), he translated Benjamin Péret, he taught at Goldsmiths', and then, in the early 90s, he disappeared. He didn't really disappear; he just went to run an art bookshop in Brighton. But his name had stopped being mentioned by the time the Internet got into gear, so a Google search doesn't bring up very much material. He had published two poetry collections: Meetings and Pursuits (1978) - a book recently uncovered and praised by Colin Herd - and Masker (1982). He had also published, in earlier versions and fugitive locations, all six of the sequences that make up A Cabin in the Mountains. This is a new release but all the poetry was, allegedly, written about a quarter of a century ago. (If I was Paul Brown, I can't think but I'd have seized the opportunity to do a little gardening.) Back then, probably, these sequences didn't reach or detain many readers before they made their disheartening way to the stacks at Stanford Uni. Collected together, they make a body of work that is not so easy to ignore.

What a great and helpful thing it would be if a reviewer could be found who had read Brown's earlier collections (preferably around the time they came out) and could join some dots for the rest of us! That review, however,  is not the one you are reading.

Twenty years after Brown's disappearance, A Cabin in the Mountains bobs up like a coelacanth (if that's what coelacanths do):  shiny, vigorous, a sample of a great era of past poetry but still with all its oily freshness.

And yet, somehow disconnected. A book that does not know about the East Asian boom, the bank meltdowns, the Arab Spring, 9/11, the internet, phone texting, Sudoku, inter-dental brushes, the national lottery, chilli chocolate, Blair Brown or Cameron, Tarantino, Dr Dre, Rihanna, Britpop or Starbucks. There's a wonderful passage in the first section of "Razor's Edge" that contemplates a dead man via the empty pages of his pocket diary: the little symbols of the moon's phases, the pages at the end for phone numbers, incomings and outgoings, In Case of Accident, Please Inform... Do you remember those pocket diaries? And when Brown writes of "the unemployed", he means Thatcher's unemployed, not Cameron's.

When I first wrote this paragraph, a long time ago, I hastened to say that Brown's poetry is not about quotidian detail and that these period references are very few and far between. Now I know the poems better, I begin to see that there's quite a lot of them - "the budget", "vending machine coffee / tea and oxtail", "the clatter of the keys",... It is still a small feature of the book as a whole, but this poetry is dense with feature. Its density doesn't give an impression of richness, though. I'll say a bit more about that later.

breadcrumbs cling to
her beauty

This line (dug out of the first bit of "Nude Descending") seems like a place to start. The image is of something more complex than perfection, impurity of a kind, and this seems to be an important part of Brown's aesthetic. He is not just talking about the woman in this poem, but about any ripple of human energy, including art:

the limits of most devices

being well-defined.
The final speck of static
on the lens that
cannot be removed.

(This line of thinking, I imagine, might run from Freud via Kristeva.) Brown's six sequences are impure, ramshackle, lazy; artfully lazy, I think, though I'm not completely certain. There is always a breadcrumb too much going on, it's as if you're trying to read quietly while there's a washing-machine going through its spin cycle. At the same time (or rather, because of this) there's a blurred quality to the form that you're trying to negotiate. Whether or not Brown did any 21st-century gardening, it's clear that each of these sequences was developed over a considerable period of time, and this (so I imagine) accounts for the text being so detailed and unpredictable, a web of so many registers.

Brown is comfortable with spinning his web in a space strongly inflected by metadata. Specifically, I'm talking about his references to other works of literature or art. A simple but instructive example is the short poem "Read In Almanac", which is subtitled "Octavalentines for Charles Olson and Philip Sidney". To pay a poetic tribute  to a poet is commonplace. To pay it to two not-obviously-similar poets within the same poem is a bit more surprising, though not much. But when a bit of Googling reveals that both the main title and the words in the opening lines are taken, not from either of these poets, but from Henry King's "Exequy".... well, that's when a strange out-of-control feeling of too-much-allusion settles on us. And a feeling, paradoxically, of liberation. When we understand that we cannot process the too-much-allusion, then the poem stops being (in a confining way) literary. It moves in a complicated space, but it moves independently. I don't intend to quote from it (it is not that kind of poem), but at its centre is an acrostic that spells out the word "abstract".

For a larger example of this too-ample metadata, take the fifth sequence, "Nude Descending". We are not allowed to begin it with our minds blank.  First there's the overall title of the book to consider: A Cabin In The Mountains, which alludes to the inappropriately lyrical name that its owner gives to a filthy bolt-hole in Beckett's The End. As I said before, the book contains six sequences. "Nude Descending" is one of a pair of sequences that are grouped under this separate heading: "The Walpurgis Paradigm" (the relevance of that subtitle eventually and understatedly reveals itself). The title of the sequence itself, "Nude Descending", points us to Marcel Duchamp's 1912 painting and this is more immediately helpful. The sequence certainly deals with material (the objectification and abuse of a female nude) that is relevant to the painting, or at any rate the painting as it might be interpreted in the later light of The Bride Stripped Bare By Her Bachelors, Even. Then we have an epigraph from Sappho (the lovely image of the one apple left high in the tree), and in the poem's second line a quotation from Sacher-Masoch. Wittgenstein, Sherlock Holmes, Spenser's March, a female slave's words recorded by a Baptist missionary in 1821, a poem by Swinburne... These are some of the allusions that crop up later on. Performing at the junction of these cultural spotlights, Brown's own poem starts to take shape, and then to cast aside that shape and move through its themes and out the other side. Let's pick up "Nude Descending" in the middle of sex.


The cells and the bruising re-emerge near the start of the sixth sequence, "Razor's Edge", in very different circumstances. (This poem, too, mainly uses a triple-margin format)


Now I've reached what I consider as Position A in writing any poetry review. Position A means to quote something from the book under review, something that I like and something that delivers its charge even in a paltry extract. That's really the essential point: to let the reader get at the poetry itself. There's so much expressed by the body language of poetry that commentary about it can never convey. I think you can discover a lot of important things about Brown's poetry from these two passages; for example, that it is flexible, aware, emotional, yet a little disenchanted - disenchanted with itself, even.

All the same, the passages I've made my way to are profoundly misleading if they are taken as a fair sample of the book before us. Indeed if Brown was always or usually like this then maybe I wouldn't even be piqued into writing this review. It's the difficulty that intrigues me; the mixture of difficulty and freedom that I see as characteristic of his time and the real value of the period in which it was composed. These are the books that we don't yet know how to read. (There are many kinds of difficulty - this is not the most obviously rebarbative kind, but it is just as difficult, maybe even more so. When you start to think about what the book is really saying.)

Because, I've caught "Nude Descending" at a single point in its trajectory, in Section III, approximately a mid-way point. But the trajectory, as you'll have guessed, is a descent - the other word Brown uses is "diminution" - he does not deal in tragic sublimity. Things become messier, not only in ugly content but in their problematic loosening of attachment to a distinct narrative line. Distinctness there is, but what becomes excitingly distinct is an action that is created rather than narrated:

This is from Section IV, which subsequently breaks out into brilliant economic and political sweats. In remission, Section V is dominated by decay and solitariness. It winds down via binbags and watches. The author himself makes an uncomely appearance (Brown is not detached from the internal stresses of a quasi-feminist poem written by a male poet, and it seems to me all to the good, though a further complication, that his life often bubbles up so close to the surface of the poetry). This section ends with the image that finally clinches that Walpurgis connection:

There remains the Coda, a heading whose implications are to be taken seriously I think; both musically  - a queasily comic (Mahlerian?) jauntiness - , and structurally, as suggesting, not necessarily sincerely, that the principal climax of the trajectory is not here but somewhere in the preceding section. In fact there is a forbidding of climax. The Coda ends:

It feels like "the engine" ought to refer us to something definite but there's no really obvious candidate unless it's the poem itself. I'm focussing on this rather unsatisfying ending because I think it exemplifies something else about Brown's sequences (in contrast, say, to Stress Position, Down to Earth, The Weather, Tomorrowland etc etc): they are distinctly short-breathed. I don't mean simply that they're shorter - they are still longish poems - I mean that they are (in a good way) too short, you sense the effort in keeping them going. If "Nude Descending" is strung between several preoccupations (the abuse suffered by women in the world and in art, the oppressions of capital, art in a compromised world, the author's effort to write the poem, the relation of language to reality, and even - as I've sometimes fancied, but perhaps mainly because of the single exclamation "Check!" - Marcel Duchamp's career) it is not so much because the poetry is intrinsically polysemous as because the poem requires many preoccupations to supply enough fuel to keep it going. It implies a poetry whose freedom abuts a hard limit, and is just barely capable of returning evidence about the boundary that it got to. It makes me think that this is poetry I need to read.