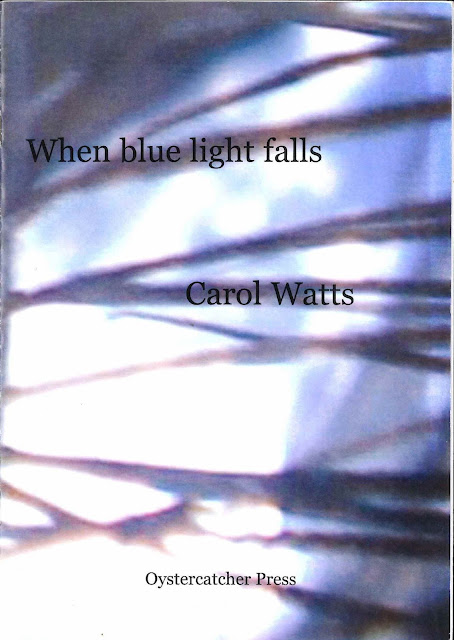 This pamphlet When blue light falls  (published by Peter Hughes' Oystercatcher Press in 2008) is the first tranche of a longer sequence.

What is here is sixteen poems. The first eight (even-numbered, 2 - 16) are like a very slow meditation on blue light, particularly the blue of the sky. The second eight (odd-numbered, 1 - 15) are formally different, the words arranged in very short couplets; the vocabulary and images become less spare ("Ukrainian", "cottonwoods", "lias") and the topics proliferate. But behind this second half, and connecting it in some way to the concerns of the first, there's a distinct diurnal sequence from early morning through to night.

This second part is sometimes agitated, in fact it's the seriousness of the thought that compels attention throughout. From the splintered vocabulary come ideas of glass-blowing and television. Some idea of extinction too, as in this poem, from the first half of the sequence:

yet it is uncertain

if there is this habitat of blue

a grip loosened into it 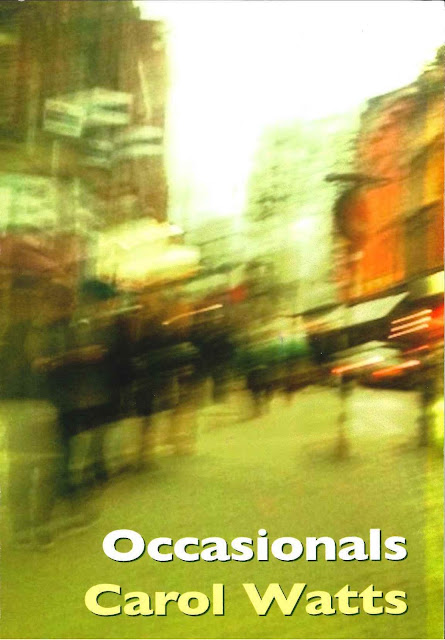 It's a basic rule of experimental poetry that you don't write about birds. When this rule is ignored, as in Allen Fisher's chapbook Birds, it causes furrowed brows. The resultant poetry tends to be neglected. And on the whole I've neglected Occasionals (Reality Street, 2011), a whole generous book of poetry about mainly quotidian nature, including plenty of bird action among other things. But increasing interest in When Blue Light Falls  made me pick this off the shelves (out of a cardboard box, in fact) and begin to think about it again. In this bigger book too I find a commitment that stops me in my tracks. I don't quite know what the commitment is to. I don't even know if the poet does, altogether. She has sort of dived without measuring the depth.


Only superficials today. The poems are dated like a diary of a year, so here's some appropriately May/June-dated extracts. The parenthesized titles are mine.

Tell me it returns, the soughing. Of
deliberate rivulets, the construction
of sluices . Sinking, the heaviest stones,
rolling. The change of prospecting a.
Gold rush, do they glint. In deposits,
rolling, slower at the base. A small girl
trips along, her mind would be elsewhere.
The drains are overcome, the hill washes.
Where culverts might once, now it is.
Matter. For survival, the overcoming
of life wells from. Below....

Flight, is brown. Heaviness rising, as
much commotion as gesture....
.... Fledging is
however. The point where the brink. Is.
Teetering, with much beating. Of wings,
clinging on with delicate. Claws, to any
available nest. It beetles over quite
vertiginously. Will it fall. Has turned into
a swallow, such luck. She said, and not
that heavier. Deal, rib cage consternation.

sharpness of. Green whipgrass, cuts.
A possibility, and children charge.
Up, piling down local mesas, limbs
combusting thoughtlessly, flung
faster. Than the sand allows, they
find themselves abrupt. As matter is.
Cooling, in the darkness of. Dug down.
Out of the wind, the cliff is matted.
Heat, the breeze has not caught on. 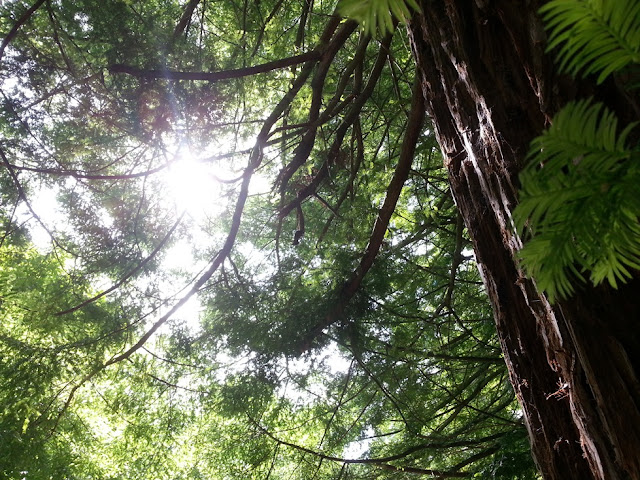 Today is the 8th of July. Consultation of Occasionals shows that it has two poems for this day, like a Brahms pairing.

The first poem (springcuts XIII)is preoccupied with darkness on a bright day. Some are out in the sun, gardening ("Took off his shirt to grow a bed.").

Yet. "When voices are dark from open windows"... "the dull kick of resignation".

All you have to say to me. A woman
is speaking, where pain is. Domestic
it comes in shades of eavesdropped.
Lack, of light.

The second poem (springcuts XIV) isn't without pain, either. In the first half, we circulate memories of things lost, maybe only imagined. (Hopkins' "Binsey Poplars" in the offing.)

In the second half, the poem focusses on a childhood memory. Of the gang throwing stones at an unpopular girl. The poet comments:

Loyalties, I was silent but. This was virtue,
to stick by in a stoning.


And she notices that the cruel girl seemed brave when stoned, with a scar on her lips.

Something of an evacuation of light. Persists,
it knows the ending of day. Approaches, it turns
towards heat as love might. Deep in the earth,
rotting gently, sweat. Of leaves, skin's sudden
exposure. Plane trees, in intentional mottling
effect, sun spots. Ruching....

....  It is the way woodsmoke brings
life forward, strong as leather, the way yesterday
always joins. With. Scenting tomorrow, its yellow
haunting.  ....


These are extracts from one of the two poems for October 31st.  All of the poems in Occasionals are 28 lines long.  The thought in each poem is fantastically interlaced, so that quoting a few favourite lines, like here, feels like a disjointing: what's quoted is good, yet  I'm aware the meaning of the goodness is largely lost.

That poem was, somewhat, about leaf-fall, but also about love, injustice, SAD, and its contrary... There's also rain in the air, and the watery element musters in larger forces in the  next poem, XVII (24th November - the last poem in autumncuts). Indeed, now it's beginning to flood.

.... Looking at his feet, they already push.
Through the flow, the child stamps.

And it's getting dark, no sun but "possible light". Earlier in the poem,

.... Before an Atlantic
storm, with hours of quiet rising. Weakness,
in light, lays down to rest. The falling out
of purpose.

Later remembered in the resting birds' "fatigue of alarm", this weakness, being necessary and to come, is nevertheless the season's potential. From a certain point of view this weakness is, will be, strength. But that's rather a drastic reconfiguration of values. How do we, or the complaining cat outside the window, negotiate it?

POEM IN THE MANNER OF CAROL WATTS' OCCASIONALS

Yet light reverses sameness, the word. Latte is a witness-board
around the cardboard hedge, the corrugated leaf. And not.
To drink deeply, but. The cone is acquisition, yet equation.
For the rain soaks also along, and can wade on pegs.
To sup laterally, the going down of. These golden fish,
for the heron to stick at. Because Nationwide they say baulked
at the hydrant, or the tap stuck, shallowing
the serrate dorsals. But more rain overnight.
To clear this suspicion of a dwelling. On the
motions of the, several traffics, following
each other out. As rinsed of old use. How she said as we
cleared, they say in the footings to the
medical centre, and rehearsals from it.
A bus-shelter draws. A flare of sun
in the plastic windows comes down. The street, as if.
So they do. The leaves wink and in the afternoon, morning,
for noon never steeples. The naked imaginings of
summer hill-forts, move in the occluded
more freely perhaps. There is a Morkerseende.
Whose space we frolic. And the large windows
open as for fitness, should a child stray in it
buoyed by reassurance. Or the continuance of home eggs.
As if the timetables came to know upon the coops.
Mostly, it is. But how do we know where to go without.
These elders, turning with a light upon the stairs. Into
a space so surrounding. Out into, as we say, the closing
of home behind, whose waiting was known so long
it's still experienced lost. Not known as a base camp.

[I'm no expert on elms but if I had to make a guess I'd say this is one of the Ulmus minor x glabra hybrids, perhaps a Huntingdon Elm: a lattice pattern on the bark (below) is said to distinguish Huntingdon Elm from Dutch Elm. At any rate, it definitely isn't U. procera (English Elm) or U. glabra (Wych-elm).] 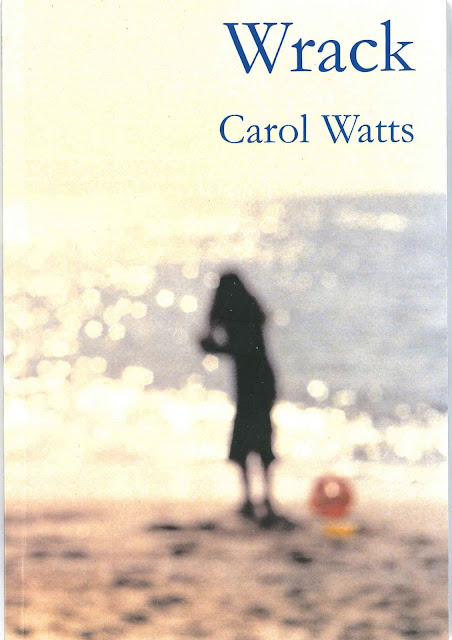 
but principle of  addition   or in a briny manual
discovered   A Dreadful Alarm upon the Clouds
of  Heaven, Mix'd with Love    shared


the shell in your palm   a child's milk tooth

always   tracking a parallel economy
shells etched with lines   frequencies lit
like the bloom of flesh   ringed and grained  [...]


Coming to this book from Occasionals (2011) , I might have anticipated this brilliance of nature writing and this flow of new discoveries connecting nature, economy and identity.


But Wrack (2007) is not just about wandering along the shoreline. It's also a salty smuggling, merchandising and wrecking book based on an actual Devon wreck of 1772 and a single woman passenger.


Which makes it a marvellous companion to the other book I'm in the middle of right now, J. Meade Falkner's 1898 adventure yarn Moonfleet, set in Dorset in 1757-ish.  (Both books being, besides the related subject-matter, very inventive bits of language ...)


And as Carol's book co-opts a touch of the boy's-book excitement of the seafaring yarn in order to pursue a meditation about women's experience in the western urban capitalist world of today, well there's a bit of a parallel there with another poem I've spent a lot of time with in the past year, Lisa Samuels' south sea island adventure Tomorrowland (2009)...


OK, that's the second mention of whipgrass, time to look it up. Apparently it's a local name, not very well attested on the internet, for a dune grass, maybe Sand Couch or Marram or Lyme Grass or all three.

When I was a landlocked child in Kent, I thought of the cormorant as a rather exotic creature confined to seafaring yarns, or perhaps seen just once, on that caravan holiday to cream-tea country.


In those days Phalocrocorax carbo bred on western coasts in the spring. Outside of the breeding season they sometimes ventured inland, for example they could be seen in winter in parts of the west midlands and northern Ireland. But not elsewhere.


Things have changed. Fifty years later, the whole of the British Isles (apart from high Scottish mountains) play host to the winter cormorants.  For example here in Swindon, a long way from any coast. Whether it's because our inland waterways are so much cleaner and they once more "teem with fish" (Bede's description of England) ; or because we've now ruined the sea-fishing ; or because inland winters are now as mild as coastal ones used to be ; I don't know - but I suspect it's the first reason, given the similarly dramatic increase in herons and egrets over the same period.  Cormorants being superb fishers, this has rattled the angling community, who want the freshwater fish stocks all to themselves.


The cormorants fly around in small flocks of half-a-dozen birds, and they spend a lot of time perching companionably but clumsily in the bare crowns of trees above the water -- I mistook them for crows or rooks until I looked more closely. (Webbed feet are not really much good for perching.)


Last Sunday I watched a cormorant fishing on a calm stretch of the River Avon in Bath. (I've also noticed them at Midford, south of Bath.) Its body sat very low in the water, reminding me of the great northern divers that I used to watch in Sweden. And now the cormorant seemed graceful, not clumsy. The long snaky head and bill were extremely impressive. So were the long dives. I held my own breath, wondering that it could stay down so long. Then I saw it again, twenty yards away. 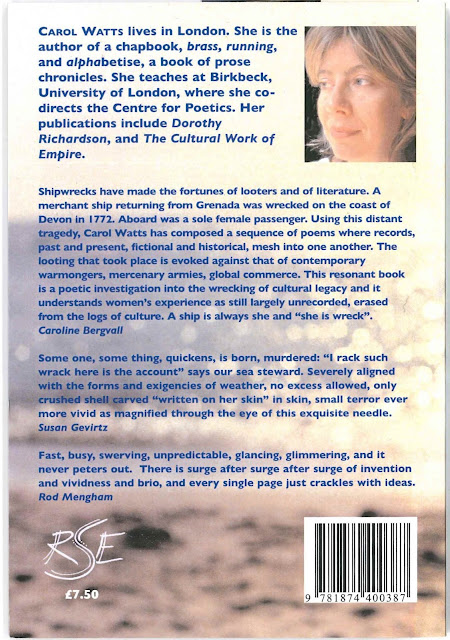