where is there to go?
everything full
utterly green
lie on the lawn
watch the swifts
yip, yip, yip

(Opening of head poem to After Lithe (July), from Peter Philpott's Telling the Beads (2020))

But my obsession with Telling the Beads (2020) didn't kick in at once. It is, at first sight, a complicated sort of book. Peter supplies an engaging introduction that guides us through the various ingredients and formal features. Obscure Dark Age history, Brecht, the seasons, modern Stortford, modern poetry...  It was all a bit too much to take in, so what happened was, I tried to read a bit, developed some questions, went back to the introduction, sighed, read a bit more, had new questions. . .

But gradually these short dips became longer and happier, I didn't need to consult the introduction any more, I felt habituated. And then the real reading began, and the real questions, the things the introduction can't answer.

Telling the Beads is a calendrical structure, beginning and ending in summer. Its contents are variously seasonal, contemporary, lyrical, autobiographical, philosophical; but there's also an underlying Dark-Age story about Unwin and his war-party. The book has illustrations sourced from Victorian popular histories. It proposes a kind of undogmatic polytheism in place of both theism and atheism (e.g. with reference to the goddesses in some of Bede's month-names).

Unwin's story has an ending, like Colin Clout's story in The Shepheardes Calendar, but in each case the poem is more than the story, and for its readers the invitation is patent, to just keep going round and round. (cf. Carol Watts' 2011 book Occasionals , another summer-to-summer poem.)  I reckon I've walked the whole course of Telling the Beads three or four times now, and I'm not done yet. I'd like to run it.

The book is organized by months, the traditional Anglo-Saxon months reported by Bede. (There are extra intercalary days at Yule and Lithe (=midsummer).)  Another input is Bertolt Brecht's 1927 poetry collection Die Hauspostille , whence comes the idea of a manual of piety that's hostile to orthodox religion. Telling the Beads plays with the idea of being a devotional book, and it really is a devotional book. Its subtitle is A Spiritual Year Book for Our Times after Bede & Brecht. (In other respects I don't see much Brecht here, but others may.)

Each month begins with a strophic head poem, with a coda (an intriguing "oracular sentence", and a skittish open-field poem). Then come the holy days for the month, a mix of poems and prose. These holy days mostly turn out to be ordinary days, which are extraordinary days. They are titled, e.g. "A Day for a Pleasant Walk in Gentle Rain" or (its predecessor) "A Day to Think on the Oppressions Caused by Organised Religions".

But apparently this arrangement still wasn't quite intricate enough for Peter's purposes. So, for instance, the third holy day in each month references Tove Jansson's illustrations to The Hobbit, as seen on his calendar in the kitchen. The number of holy days increases each month until Yule (from 3 to 8), then decreases to midsummer (8 back to 3).

What Peter doesn't fully disclose is the fixed pattern of the holy day sections, which are suffixed a to h. At its full extent (in Before Yule (6) and After Yule (7)):  a is verse, b is prose (sometimes with diagrams), c is prose (the Tove Jansson one), d is verse, e is prose-verse-prose, f is epigraph-prose-verse-prose, g is prose, and h is a twelve-point list.

Nor does he disclose that things start to change, especially in the second half of the book. The a poems stop following the strophic form of their own head poem and instead begin echoing the forms of earlier months, running backwards: i.e. 7a has the strophic form of 6, 8a has the strophic form of 5, etc. This carries on until 12a, which you would expect to match 1 but actually matches 2, the same as 11a did. (Meanwhile 8f fails to contain any inset verse; "Unwin did not make song on this theme", it tells us.)

Something else, too. In the poems of the first three months the stanzas (or strophes) are elaborately matched line for line, by morphed vocabulary and meaning, an aspect of Peter's poetry that I've previously termed "phrase transformation". It's half an echo, half a dialogue.  As an example, here's the head poem for Holy Month (3):

look! another time to start
this year has nothing but, so
look at what it gives us
summer again (all brief)
and a chance to dig in
harvesting slow to make
due sacrifice to all the powers
manifold & circumambient
last brightness in the air
it starts with us all together
you can say we begin with nothing
except what the world now gives us
insects again & all small life
thronging where we dig
harvesting in the middle of decay
preparing what is due to live
many folded around us
lost in the brightness of the air
Let's just hold it together
begin again with nothing
open to what the world gives
life innumerable & delicate
bursting out where we dig
harvest triumphs over decay
preparing some brief escape
our lives are folded in this world
lost within its final brief air

This resonance is still discernible in months 4 to 7, but only just. Then it's gone until Aretha Month (9) when we suddenly catch its elusive presence between two poems. In 11a it's there but restricted to the last line of each stanza. Finally (head poem of 12) it returns in something like its full effect.

In short, there's literally no end to discovering features if you want to, but you don't have to. It's like the book of nature.

Reading this poetry means experiencing a paradox, or rather many paradoxes.

The poems are both silly and wise, both simple and complex, both committed and uncommitted, both casual and engaged, both mundane and grand, both throwaway and crafted, both reverent and irreverent.

When I wrote about Wound Scar Memories I talked about this as the expression of the poet's character, the "Peter of the poems". But in Telling the Beads what seems more prominent is that these paradoxes are a way of staying true to a particular vision of life,  a vision purged of idealism and authority but humble, credible and warm-hearted.

You can imagine that the word "now" might feature largely in poems so linked to specific times of year, and so it proves. Along with "this" and "here", it chimes through the book. But the word is less prominent in midsummer and almost absent in winter. Does this prove anything? I suppose not. But I feel that it's attentive to our common experience; that "now" correlates with times of the year when we're keenly aware of change: the earlier nightfall in August, the approach of winter in November, proper spring in April. And it's less prominent at those times of year when our main sense is of each day being much like the next.

All the diffuse & varying things
the somewhere & the arbitrary constraints
what is the use?
not subtle
not some controlling grammar, no
just the inheritance again from arbitrary power
that won't outlast our deaths there
-fore shouldn't outlast our lives
even though the weather breeds submission
this life can be amended
cakes
made of flower, eggs, milk & fruit
small knots of resurrected sunlight
crunching against our teeth
no one
needs that dying worthlessness
this month is short as the sun returns

(from 8d, "The Day to Realise How Short the Month Is")

Billy Mills on Telling the Beads:

Billy's post gives a better sense than mine of the succession of different materials, and it persuaded me to listen out for the individual character of the poems, though I dare say that's not very apparent.

Peter Riley has a brief notice on Telling the Beads here: 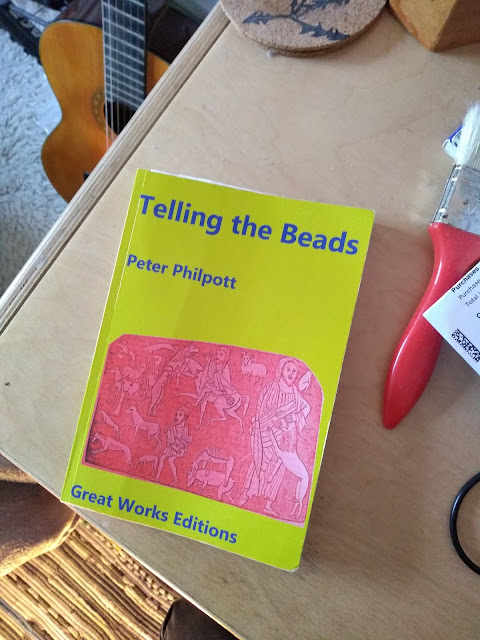 Two other posts about Telling the Beads: