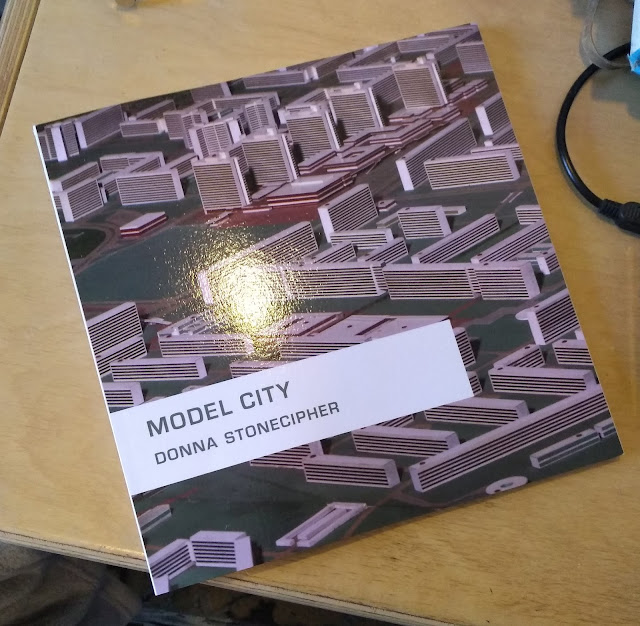 Finally tidying seven years of emails, I came across a forgotten Amazon token for £10 (I must have done a survey or something), and since it was about to expire, I hastily spent it on the first modern poetry book that came to mind. Well, not quite the first -- the first two or three turned out to be not available or too expensive -- but then I struck lucky with Donna Stonecipher's Model City (2015), so that's the gleaming new addition to my bookcase, and I'm very pleased with it. I can even forgive the square format, though it inconveniently sticks out of the shelf, stealing precious footprint from a room not over-blest with it.

I'm a bit over half-way through reading it, and it certainly is a poetry book that I think most people would want to read in that straight-through just like a novel way -- not that the order of the poems necessarily matters, but there's just no obvious reason for doing anything else, because all the poems look very alike.

Today I wanted to quote another poem in full, so I looked about on the internet for one that was already out there, and came up with this:

It was like watching the city slowly powdered over with snow from your bedroom window, the molecular makeup of the city slowly altered through powdery intimations of ossification.

It was like watching the snow slowly powder over the construction site across the street, which will one day be a hotel, the snow filling in the space temporarily where one day there will be permanent temporariness.

It was like feeling powdered over with snow oneself, as one is part of the city; apart from it, watching it from the window, to be sure; but a part of it, a powdered-over temporary part.

The only time I was in Berlin, it was April and the city was snowy, not a powder but a soft wet snow that fell continually, and melted at nearly the same rate.

The city in Model City is mainly Berlin, often recognizably Berlin, but that begs the question. These poems are about the city only in an indirect sense; what they are directly about is the imagined city, the conceived city, the contemplated city. It's a city seen from a musing, moony distance. As far as I've read, the contemplated city hasn't much traffic (though a delivery truck just turned up in Model City [42] ), or working life, or family life, or energy infrastructure or economics or laundry or day-care or markets. The poetry contemplates a stillness. It's drawn to empty real estate, blank billboards, clean sea-shells, historic bullet holes, snow-powdered construction sites in which no-one is doing any constructing.

And yet for all the stillness in the poetry the city has its teeming crowds, its crowds busy and moving, as on escalators in a silent movie, inferred but unquestionably there. There's an inaudible buzz of chatter.

It was like standing in the midst of a city park with a friend who shows you that if you stare too long at the artificial waterfall, then look away, the waterfall will suddenly start to rush not down, but up.

It was like trying to find a café that was not a Starbucks or Balzac or Einstein in an unknown city known for its coffeehouses, and finally giving up and ordering a tall skinny latte with the familiar chaste mermaid on the cup.

I wanted to illustrate this post with a photo from that time I visited Berlin (it was 2013, my stepdaughter Kyli was living there), but I couldn't track down those photos in my storage and began to wonder if I'd lost them all, those snowy Berlin buildings and just before that the loud fireworks in Valencia.