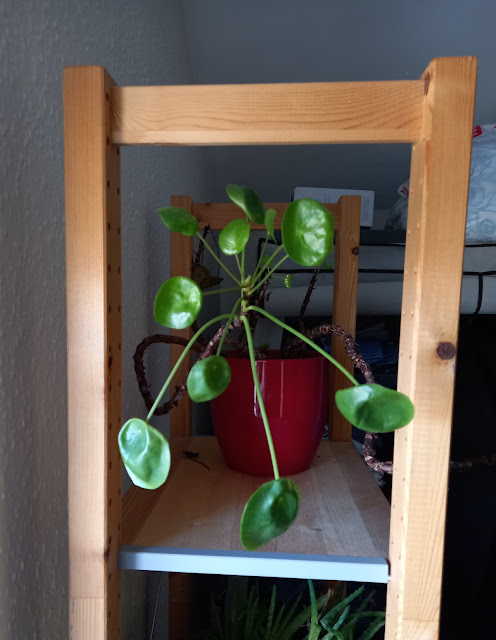 Taking a break from Thomas Middleton and learning Swedish, I felt a sudden desire to read some modern poetry, and a name came into my mind: Sheila E. Murphy, a poet I've never read. Thus I found my way to the publisher Unlikely Books and their page for Ghazals 1-59 and Other Poems (2017) by Sheila E. Murphy and Michelle Greenblatt. It includes three of the ghazals and I found them so absorbing that I keep going back to them.

I suppose it's OK to quote one of them here.

You hurl stones without a glass house then
You mint coins for parallel tossing.
Factor of two intrudes upon faculty of rest,
A blue wedge between the dust of what is and what isn't.
As the furniture collapsed, we made bowlfuls of
Summer in a retrofit, just right for pin light.
Stalks of leeway green made sugar of
Bitter shoots of limestone flowerings.
The outcrop stone bordered the town like darkness around
Sand scraps in a chipped window repeating visuals.
Culpable beings safe from their mishandling of the incident
All crisscross tensile tulips with common shadings in the sea breeze.
Every eye blindly clatters and closes
During peppery late afternoons gone soon.
Coins wrinkle water when interrupting the smooth face
Of laketop burning at the parting of waters scarce.
In a trench of rubble she hid from him and his
Parameters defined without perfume and stock.
Climbed weight rooms crowd out the irascible;
While interludes charm the whole crown to sleep.
The chiseled space I left between us narrowed and
In small lone plum signs levels meshed to singular.
Caresses occur when souls leave keening to
The crowns of the trees, nestling leaves atop leaves.
The mute city expresses itself by
Tapping out Morse Code to reach the distance.
Amended sacrifice litters the daylight;
Nighttime stages herself in front of a crowd.
Those transatlantic puffs otherwise known as clouds
Hold moisture before letting go to rinse us clean.
*
One journey through the poem could begin with the letter C, the hard C-sound (except in the mute "city" but resumed in its capitalized "Code"). For instance in the sequence coin, crowd, crown, clouds ...
The poem annotates various exchanges through the medium of air: tossed coins, dust, light, perfumes, sand, litter, raindrops, morse code and the discomfort of peppery or bitter taints.
So first this exchange medium of possible union, caress and gift; but also of possible imposition, intrusion, interruption and mishandling.
The poem begins with a responsibility-free dream image in which "You hurl stones without a glass house". Because the flying pellets, the messages or missiles are only transiting through, their relation to your own responsibility can be shrugged off.
In contrast are solid structures that occupy place and produce separation. The trench of rubble, weight rooms, mute city, chiseled space.  The poem registers a need to judge these standing obliterations of occupied space. But it would like to escape responsibility, to enjoy the common shadings of a breeze, to posit a world in which things happen without our agency: in which furniture collapses and caresses occur and eyes blindly clatter and close.
It dreams of camping in the ruins. It says "we made bowlfuls" but it doesn't say "we made bowls". However the following line's "retrofit" comments sardonically on our powers of post-rationalization and re-framing: a line of questioning that begins with "Culpable beings safe from their mishandling" and continues through e.g. "amended sacrifice" and "stages herself". So the poem is both celebration and lament.
*
Sheila E. Murphy, in a conversation with Thomas Fink, describes these poems as "pieces working in the American version of the ghazal". That seems right, the relation to the eastern ghazal tradition is quite distant: these poems are characterized by a space and regularity that recalls a modernist building.  Most traditional features are dropped. What does clearly derive from the eastern tradition is: a poem composed of couplets that are separate from each other, not just visually but in discontinuity of thought, image, story, locus.
Is there any residual trace of the traditional subject matter of medieval Persian ghazals, e.g. "erotic longing and religious belief or mysticism"? (Quote from the Poetry Foundation glossary .) I do sense the shadow of it.
Here, for comparison and contrast, is a ghazal by Rumi (Jalāl ad-Dīn Mohammad Rūmī, 1207 - 1273), in the English translation of Brad Gooch and Maryam Mortaz: the translation doesn't attempt to render formal features of  the Persian original e.g. refrain words and their rhymes.
If there’s no trace of love in his heart
Cover him like an angry cloud over the moon
Dry tree, don’t grow in that garden,
Poor thing, left without the shade of a tree
Even if you’re a pearl, don’t separate from this love,
Love is your father and your family
In the world of lovers, a deadly sickness strikes
Each day more painful than the last
If you see the blush of love in someone’s face
Know that he is no longer merely mortal
If you see a reed-flute, bent by love, grab it
Squeeze the reed until you taste the sweetest sugar
Shams of Tabriz lures you into his trap
Don’t look left or right, you can’t resist.
Traditional ghazals are of varying length, between five and fifteen couplets. But Murphy and Greenblatt's ghazals are all the same length: fifteen couplets. (Apparently this particular regularity wasn't in their original plan, but it evolved.)
releasing authorship becomes almost inevitable
says Murphy about collaborative work (gently resisting an invitation to try to disentangle individual contributions).
The lovely Murphy/Fink exchange makes us wish that Michelle Greenblatt could have been part of it too. She died before the collection was published, and its composition was interrupted by long periods when she was in too much pain to write. It puts another slant on a collection that, judging from the three ghazals I've read, voyages in regions far beyond personal testament.