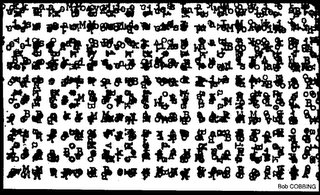 Bob Cobbing insisted that his images were meant to be experienced within their pamphlets, so these instances are a misrepresentation.

The most interesting piece I’ve read on the Cobbing collaborations is by Lawrence Upton. Upton’s comments on eg. the importance of the performance and not its documentation, on “carnival time”, and on the flattening effect of photocopy, are all glosses on why Cobbing’s work resists iconization of the kind you're necessarily seeing here.

Til Da Na om I

Blatent Blather/Virulent Whoops is a complete Bob Cobbing/Robert Sheppard collaboration and you can find it here. 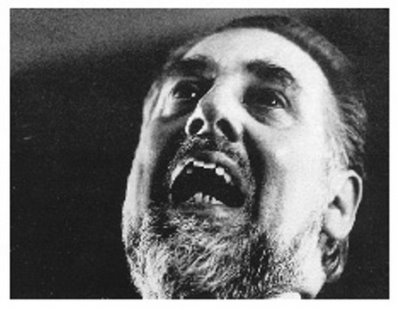 
Writing about Cobbing is sometimes dominated by dates and stats; track rather than artefact, all the things he published, all the poets that he inspired or worked with. Evidently Cobbing himself was partly responsible for this: for example, he actually knew (fifty years later) that his first visual poem had been written in 1942. Perhaps he had been asked so often to talk about his work that he had been forced to become his own research student. The resulting exemplary grand narrative is, not exactly biography, but at any rate “poetology” as Doreen King puts it (Feather Books, 2003).

I believe it's necessary to get beyond that, but I do feel a bit of a traitor putting together this decontextualized presentation, which intrinsically de-radicalizes all the processual parameters of what Cobbing did, his assurance for example that “Communication is primarily a muscular activity”. Tracks and vectors that happen to have been left by Cobbing are transformed by presentation into the more familiar kind of finished artefacts on which dreamier artists have pinned their hopes of immortality. Yet I hope you’ll agree that these rather random instances of Cobbing's work, though freed from their exemplary burden, are still tense with the implications of their making, maybe with some unpredictable new powers too.

Comments:
Is it so surprising that Cobbing remembered making a poem in 1942?

The coach house selected (1976) includes it & that was only 34 years on. (I think the Ceolfrith retrospective 4 years before had forced him to do a bit of self-documentation too - and once the dates are in a book, you just look them up. Someone made me a pretty good biblio some years ago and I se that now.)

But I can remember much of what I was doing 30 years ago - someone was asking me about it this month and I recalled the main points without looking at my records. I couldn't necessarily recall my entire record, far from it! but I can date the first poem I thought was Earth-shattering (tho I am vague on when I faced up to its badness); the year of my first mag publication etc. On top of that, I think life might have been a little unusual and therefore memorable in 1942, anyway, and access to an ink-duplicator for artistic purposes might have stuck in the mind too. He originally announced the piece as his "first duplicator print" rather than "first visual poem"

One might also view this date-attribution as part of a set with the publication a little later of a volume of his collected poems devoted to cut ups, which served to demonstrate amongst other things that he beat Gysin and Burroughs to it by some years. Yawn.

But I am not sure that he encumbered us greatly with "dates and stats". I sometimes think that commentators fall back on them because they don't know what else to say. I think he filled the demand rather than trying to create it

I had to ask a research student recently to STOP asking me, one by one, the methods I used to make my vispo - and how did you do this, and what about this - saying I would gladly respond to a full list sent all at once; but could we not talk about the poetry, the images themselves, or the poetics of the method, rather than helping to draw up an incomplete retrospective catalogue without conclusions... And, initially, the rest was silence

And that's to do with lack of vocabulary, perhaps + the feedback of *not having people writing about the work. Most commentaries stop quite early.

About a year ago, I gave a talk on Cobbing where I tried to extend the discussion beyond that first ten years after ABC in Sound (_Sound Poems_ as it first was) and to trace some origins of the later work in the early... Afterwards I was asked why Cobbing continued making his poems when the movement of which it was a part had ended in 1970. My suggestion that perhaps he wasn't bound by such categorisation was brushed aside as, apparently, ridiculous. A book was quoted to prove I was wrong.

Then I was told that everything of Cobbing's after 1970 was "much the same" as what he had done by then. I gave up then because I was and am sure that I had just demonstrated it wasn't. The perceived similarity might reside in its all being different to other modes of poetry, but that's something else.

Apart from establishing that he was a pioneer, I don't think Cobbing actually offered much documentation at all. If you asked for a date, he gave you one. He quite liked lists and records, but wasn't very good at conventional filing; and there's far too much documentation missing for me.

Increasingly, he resisted being interviewed, because the questions were so dull and unambitious, the interviewers being content with a rerun of someone else's interview. Sutherland, Spinelli and Sumner stand out. I hope I haven't missed anyone worthy
I have always disliked the word _poetology_, and that booklet...
Cobbing did insist that his images were meant to be experienced within their pamphlets; but he also recontextualised them. It is instructive to see how the poems changed their shapes and forms as he changed the contexts. To perform them, he tended to use prints on cards - and was sometimes keen on randomising the order of the cards; sometimes the images went on to walls in galleries.
I wish he had done more installation. The early Apollinaire piece showed the potential, but for a variety of reasons he did relatively little in that direction... His comments re KYOTO TOKYO suggest his willingness to see the visual poem abstracted from its context - but I think it was best left to him to do it - the ghostly images at Whitechapel a few years ago underwhelmed me; and I am still angry about the gross misrepresentation of his intentions re DOMESTIC AMBIENT NOISE at Bury last year.
The failure to understand the fundamental difference - and similarity - between the ink duplicator work and the photocopy work at Bury did little to get beyond a misunderstanding of his work in terms of "muscular activity". Instead we were treated to nonsense about Pollock running amok

You are, for all that, wise to be cautious about losing the contextual situation