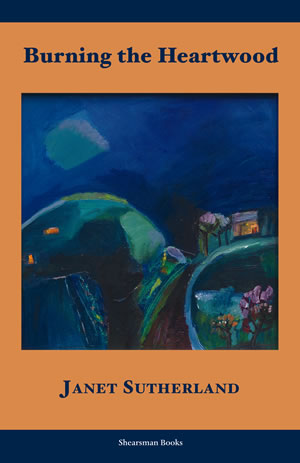 
A debut full-length collection, the unevenness of poems here perhaps reflects the ten year writing-break and the subsequent beginning again. Sutherland wrote poems in the eighties, nothing in the nineties, then started writing again in 2001. One of the returning styles is that of simulating a speaking voice, then cutting across it with line-breaks to produce a reading tension, a style as familiar as it seems to be difficult to occupy convincingly:

and hiding under cover
unconcealed

your o could be a cipher
or lament

a lost breath lying underneath
the ocean

Often intertwined with this is a surreal whimsicality; I remember reading Sutherland's love letter to a spider in Wendy Mulford's The Virago Book Of Love Poetry (1998), quite charming. It is a method which proves difficult to wrest from nested cliché:

A third style appears near the end of a poem: to suddenly lurch into a judgement, a summing up. A poem about making apple crumble describes peeling the variously cankered apples, then finishes "and autumn lies in shreds / about the table." That's a mild summing up, but the problem is again one of difficulty: if your aphorisms of knowledge are anything less than compelling, the reader will probably be justified in asking, "So what?" The end of 'If you kiss a mermaid' is, "she's just leviathan // in miniature; abandoned, lost / and dying slowly like the rest of us." Another apple poem, 'Windfall', ends with this thought, "you bring us Eden / in a plastic bag". Many of the poems which utilise the styles delineated also contain memorable lines:

Agnes has planted her onions
in good time – thin green shoots rise
in rows. She works her shallow hoe
through rampant weeds in May.
In summer buttressed ranks seed blue
and blowsy globes. Still air
surrounds the pungent humid depths
where ants and woodlice journey
over cracking soil. The swelling domes,
the paper-covered monuments
she harvests slowly against the winter.
The seasons fit seamlessly one against
the other; her sorrows have many layers.

It is a vivid description, one imagines the humid depths, but it seems to go wrong with "monuments", leaving this reader back at the surface, when "buttressed ranks seed blue / and blowsy globes" had been just the right side of precious. The result is that this poem's portraiture seems over-explained by one degree: onions inside onions, layered sorrow. In a debut collection, perhaps we look for growing points, arrows or the hints of arrows off from the dominant styles of other poetry being published, and these are certainly here too. In a translation of Sappho (though Sappho is not credited in the book for some reason), everything seems to contract, and the final summing up is transformed into a shooting-through:

Opposite you he sits,
this man, equal with the gods,
listening to you –
your sweet speech

and your laughter. My heart
lurches when I look
at you, even briefly.
I cannot speak.

My tongue is stopped.
A sly flame runs
under my skin. I can
see nothing. My ears hum.

Sweat drenches me.
I tremble, bleached like
grass. I have come
closer, now, to death.

Such a familiar text is re-felt and it is terrible once more, as it has been terrible in other translated guises. Sutherland has produced a plain and effective rendering. We need only compare the ending of the poem with three other translations to see that this is so:

Sweat runs down in rivers, a tremor seizes
All my limbs, and paler than grass in autumn,
Caught by pains of menacing death, I falter,
Lost in the love trance.


Sweat pours out: a trembling hunts
me down. I grow paler
than dry grass and lack little
of dying.


Swyte reems doun me; frae held to fuit
a trummlan grups me, sae's I sit
greener nor gress, in sic a dwalm
I kenna wha I am.

At other points, a banal force is gathered from the form of moral illustration, such as 'Freedom 1' which asks, if you were a bird and saw a dry seed on the dusty earth, would you fly off in search of water, or would you "swoop down / for a quick feed?" The greatest successes in the book occur when the stylistic templates are resisted, often when a new influence stills them. There are scattered poems which seem to describe a painted space, most obviously in this Hockney meditation, also, to this reader, the strongest poem here:

the diver, when he surfaces, will see
the rocking of an ocean
uncapped waves
and haloed, bright,
an undertow
of shadows
in blue light