As reviewer, I find myself in a curious position here. I'm rather ignorant of the literary tradition in which George Messo has established himself, as a translator of several modern Turkish poets whose work I'm not familiar with (Özdemir Asaf, Melih Cevdet Anday, and İlhan Berk), and yet I have some experiential knowledge of the area of northern Turkey around which this collection gathers, having walked and hitched through a few small villages around Artvin in search of the long-abandoned Georgian churches to be found there. From my experience at least, the details taken from life in these poems ring absolutely true:

He spoke a peculiar dialect.
The ruined monastery
was now his farm.
Cowshit filled the nave.

(I recall being told, in no uncertain terms, though in slightly uncertain German, to 'get off my land' by an understandably irate farmer whose tool shed I had foolishly assumed was an unused 15th C ruin.)

But this collection is more than tourist-fodder. It engages at a deeper level with the minutiae of living in a place, integrating this with history so it resists a through-reading, of the kind that a guide book or travel supplement encourages, and instead sends you away (to the internet if, like me, you're sat at a computer; to a library if you want to do it properly) to discover more about, e.g., Yavuz Sultan Selim 'the Grim', governor of Trabzon and sultan of the Ottoman empire. The poem that mentions his former residence, 'Weather Like This', is worth quoting from as an example of this tessellation of historical detail and mundane observation:

You are in the garden of Yavuz Sultan Selim.
Mountains hold the sky up like a child.
Found in the shade of cedar trees,

a sole fig-tree bears its single fruit.
If you lay down under that very tree
perchance you may catch this fig

as it falls through seven centuries,
the Sultan gazing out of his past
as you stare back at him.

But your shoes are soaked and your overcoat smells of dog.
History will not let you in.

I like the way that the anachronistic "perchance" trips you, adding a note of courtly strangeness to the narrative and enacting history's exclusion of anyone smelling of dogs and having wet feet (for which read anyone alive).

I'd like to look briefly at Messo's translation of İlhan Berk's 'Inscription on a Grave', which is accessible from the hyperlink above. Just to be safe, here it is:

"I, Ali Nalbantoğlu, born 1304,
from Istanköy.
Tallest of three brothers.

Nameless, untitled in this world,
and so too here.

My legacy?
I crawled my way to seventy-four
And now lay here, in Halikarnassos."

That's an inscription a friend and I
stopped to read at the end of a long lane
one late October
around noon.

This poem reminds me irresistibly of Cavafy, in particular 'In the Month of Athyr' (translated by Rae Dalven):

With difficulty I read.....on the ancient stone
"LO(RD) JESUS CHRIST.".....I make out a "SO(U)L."
"IN THE MON(TH) OF ATHYR."....."LEUCIU(S) FELL A(SL)EEP."
Where they mention age....."HE LI(VE)D...YEARS."
The Kappa Zeta shows.....that he fell asleep young.
Among the many worn-away pieces.....I see "HI(M)...ALEXANDRIAN."
Then there are three lines.....that are quite mutilated;
but I make out a few words–.....as "OUR TE(A)RS," "SORROW,"
then again "TEARS,".....and "W(E) HIS (F)RIENDS MOURN."
It seems to me that Leucius.....must have been dearly beloved.
In the month of Athyr.....Leucius fell asleep.
I think it worth mentioning Cavafy because Messo's work seems to share with his a fleeting, fugue-like quality. The language is perhaps not as deliberately unadorned as Cavafy's, but many of the poems in Entrances speak in a melancholic voice that, through ellipsis, remains fluid (as opposed to the sort of marble tombstones that such poems could become) – here's 'Going to Rize':

Red. I came here in the spring,
your Black Sea garden tilting north.
Rain was in our minds, and something
else we thought it might be worth

our while to say. Unsaid. Instead
the one sense turned to everything
was smell. Beads of musk, your red
dress, rain-soaked, holding the scent's sting.

My favourite poems in this little collection are the most macaronic, mixing Messo's Turkish experiences with a wider range of world poetry: the lovely 'Shenyuva' riffs off the poem 'Sent north on a rainy night' by Li Shang-Yin, whilst 'Hotel Paris, Trabzon' is appended 'after Apollinaire', (possibly a reference to A's poem 'Hôtels' from Alcools, though I could be missing a trick here.)

Rumour is I'm leaving.
My room is shaped like a cage
and the sun puts a fist through the window.

But I, who only want to smoke,
know nothing, and light my cigarette.

I don't want to leave.
I want to smoke.

Is this an improvisation from Apollinaire's lines (excuse the translation) "My ugly neighbour / Who smokes an acrid / English tobacco"? I'd like to think so, as I'd like to think that lines 2 and 3 are in homage to the Calligrammes, the way they put a fist of light through your perception the first time you read them. 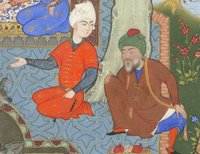 I also enjoyed a prose poem about the morals to be derived from a fable about a flying tortoise, in a sequence that takes as its point of departure the illustrated manuscript of the Haft Awrang by the Persian poet Abdul-Rahman Jami.

I read in the Acknowledgements that Messo's work is due to appear this year in a Stride anthology, edited by Andy Brown, entitled The Allotment: New Lyric Poets. Personally, I'd love to see more of Messo's translations, only one of which appears in this collection.