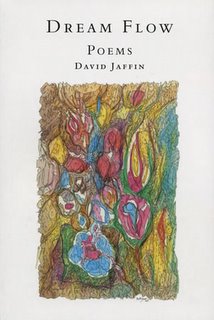 
This book contains 459 short poems, all written in three or four syllable lines, cutting words across the line-break. Since Jaffin's 2000 "comeback" volume, The Telling of Time. Poems 1989-1997, there has been a more than yearly output of large books like this one, containing poems in this form. This is the first poem of Dream Flow:

As a spi
der's web

We never read what "it" is, so the web metaphor is all ground and no tension, and the final two lines are a hanging definition. Who is Charles? This

is the poem's heart, with no hyphen the lines read as color which is then activated, the poem colors out: the following four lines reiterate this; a spider's web is an extension of the body, a territorial song of entrapment which is "intensely aware" if the spider is on it or near it and can immediately sense a disturbance; the coloring out is, then, one of density/intensity and necessary harm. Why cut the spi/der in half? It slows the eye down so a spider can be seen in the splice, the word can be word.

Apparently these poems represent a year's output (2005) which suggests many days where several were written, or perhaps long intense runs, cutting, writing. The sheer number may come from an urgency, or else an automatic impulse which was felt to resist editing down, so that a year's span could stand. This is the third poem:

the line be
gan he

became only
there as

uating a rhy
thm which

One quickly develops a way of reading Jaffin poems where the word is suspended because a suffix is probably a breath away. Breaking 'be/gan' tricks out a half-imperative; sha/dows and rhy/thm are less interesting, and perpet/uating which could have been perpet//ually holds over this unchosen rhyme to continu//ally. The cuts keep my mind only on one or two lines, so the idea of being only there where the line began keeps getting lost by the time the negative 'which/wasn't his' turns the poem to a mystery of nested agencies.

Many of these poems are didactic and it turns out that Jaffin, American born, is a pastor in the Lutheran (Evangelical) church in Germany who also publishes collections of sermons.

s
left as a

than his
gassed ball

oon could
hold the van

This time we get the physicality of inflation, 'gassed ball//oon', and a movement from child to man to heaven. Jaffin also possesses an aptitude for definition, variously hitting the mark:

those cush
ions are sea

ted higher
than your

own indul
ging self.

What is this (your) self indulging on? Comfort, or does it dine on itself? Seated in a sea of cushions? Then there are readings of paintings and musical works (Rembrandt, Georges de la Tour, Dufay. . .) which often try to sum them up. Also, poems on current events (Iraq, New Orleans). These two are the least accomplished strands of the work here. Two sentences on Descartes or Rembrandt could make for interesting marginalia but Jaffin's thoughts are too often banal, and no amount of stretching down the page changes that. As for current events, these are disparate in their effects and causes and Jaffin's attempts to write spare, minimal poems in reference to them produces work as ephemeral and hollow, in its own way, as the daily news copy, though perhaps this is the intention.

s a voice at
the bottom of

the sea Darker
even than me

mory can re
cord Hidden

from the depth
s of its own

til split o-
pen the midst

of those tropi
cal winds Cry

ing out for the
blood of all

As Jaffin said of Stevens, in an interview with Tony Frazer (22 October 1980), "he wrote too quickly, he wrote too much, he was too much interested in his own writing for its own sake." However, among these 459 poems there are many which are full of enlivening effects, as with the poems I quoted at the top of this review; the question is finding one's way to them among the others.
Permalink